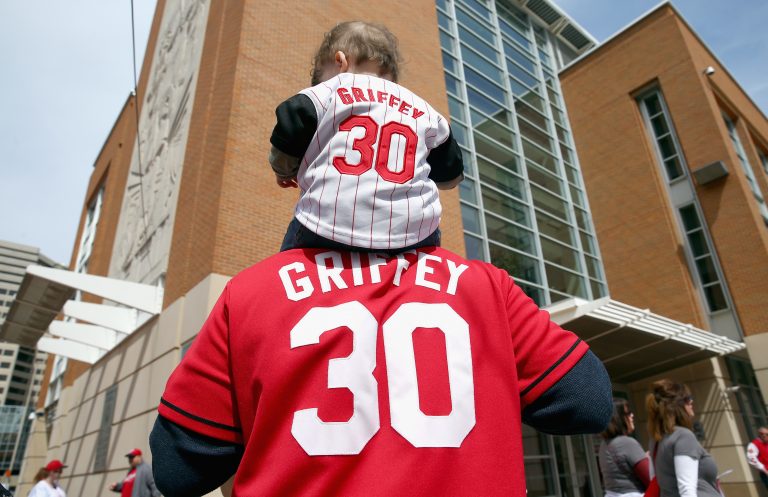 Perhaps my most cherished possession is a photograph encased in a gray frame, the exterior of which has been worn down by the inevitability of time.

Taken nearly 20 years ago in the front yard of my childhood home, the photo features myself, my kid brother, and my father. All three of us are rocking the forest green shirts worn by my Lakota Sports Organization baseball team, which my father helped coach.

Wide-smiled—and sporting the early beginnings of my father’s prodigious schnoz—I look happy and carefree. My brother, a rollicking little rascal in his youth, wears a mischievous grin and Power Rangers shorts as he shows off a tennis ball to the camera. My father, owning the hell out of his scarlet shorts in a way only a child of the ‘60s could pull off, simply looks proud as hell as he kneels behind my brother and I and envelops us in giant bear hug.

Photographs are moments frozen in time, but it’s interesting to notice how much can change and how much can remain seemingly untouched over 20 years. In the background of the picture stands a tree that still sports the world’s fastest-growing weeds at its base. There’s the same rock foundation that outlines a neighbor’s house. And the angle of the shade looming over the bottom half of the picture reveals that this photo was snapped in the early evening, the intense summer sun glowing off the lawn.

Not long after that photograph was taken, my father’s time on Earth was up. A massive heart attack claimed Jay Thomas Freking’s life at the age of 36.

Sunday is Father’s Day, a day that onced caused varying levels of emptiness and apathy from yours truly. My soul often ached in the years following my father’s passing, and I longed for the subtle reminders of my dad’s presence.

I missed the sound of relenting wood as his 6’2 frame walked meticulously down the stairs. I missed the sharp, ticklish feel of his goatee pressed against my face. I missed rushing to greet him when he came home from his job at Jacobs Engineering.

Like many men in American culture, outward expression has never been a strong suit for me. My father has not been heavy on my mind for many years now, but opening up about the man can rob me of my default stoicism. As I write this column, I find myself occasionally quaking. My eyes water and my throat swells, years of repressed emotion coming back to life.

I’ve made progress, though. In my youth, I was reluctant to offer details about my father; nowadays, I’ll spill the truth if I’m comfortable with my audience.

One of my father’s favorite lines was, ‘You can never have too many friends.’ I’ve never felt compelled to fill my father’s shoes in any sort of way—my brother bears more of a physical and psychological resemblance to him, while I am more of my mother’s son in looks and personality—but I have taken heed to his relationship-building words, because I’ve seen its impact firsthand. Nearly every time I run into one of my dad’s old pals or a former acquaintance, the introduction is typically followed by a smile, a knowing shake of the head, and an uttering of, ‘What a great guy.’

As a boy, I remember being consumed by a confluence of emotions when I stumbled across fathers and sons playing catch. Dejection. Envy. Resentment.

Now, I smile, and I often allow myself to daydream into the future as I aspire to provide the same opportunity. I’ve come to realize that the one thing I am absolutely certain I want to be in this life is a loving father; everything else is gravy. I very much look forward to living up to the standard set by my father and my mother; the latter owns unflinching devotion and boundless patience to my brother and I.

Baseball is famously branded as a game of fathers and sons. Major League Baseball broadcasts often pan to a pair seated next to each other at a game, the child listening intently as his pop calmly explains some facet of the experience unfolding before them. And of course, there are countless examples of sons following their father’s path to the major leagues, the most famous local instance being Ken Griffey, Sr. & Jr.

My chief memory of attending a Reds’ game with my dad is him bare-handing a Jeff Branson foul ball that was headed directly for my face on Sept. 25, 1996. (I’ve still got the ball.) My family’s history with the Reds stretches back to the 50s when my father’s parents and my great aunt and uncle began regularly attending contests at Crosley Field. And though my father’s side of the family features deep Catholic roots, Opening Day just might be the preferred holiday of choice for most Frekings.

So, on this Father’s Day, I’ll remember how the love of baseball was and still is a common bond for my father and I, a shared passion I hope to pass on to my children as I kneel behind them and engulf them in a giant bear hug.