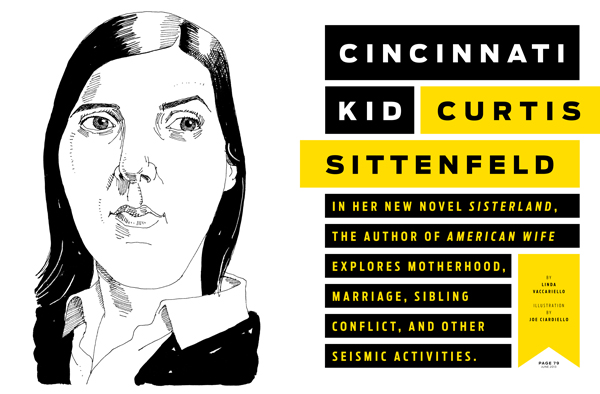 You feel the floor shake and you wonder if a big truck is driving past; Curtis Sittenfeld feels the floor shake and she starts a novel. The Cincinnati-born author brings out her fourth book this month. Sisterland is set in St. Louis—her home since 2007—and centers on identical twins Violet and Kate, an earthquake, and the psychic prediction that upends their lives. Which all sounds pretty woo-woo coming from the author of such literary best-sellers as Prep and American Wife. But Sittenfeld insists the book is essentially about being a suburban mom. Sisterland captures Life in the Time of Diaper Bags with deft humor and heartbreaking accuracy; when Kate talks about experiencing “the anxious heart,” it’s something any parent—psychic or not—will understand.

Recently we talked with her about writing, motherhood, seismic inspiration, and a possible setting for her next assignment. (Hint: If Mr. Darcy were a St. X alum, would Elizabeth Bennet be a Finneytown grad?)

When people ask what your new book is about, how do you explain it? I used to say, “Well, you might not know that in 1811 and 1812, the Missouri boot heel was the site of some of the strongest earthquakes ever, and I’ve written this book…” And they’d say, “Oh, I can’t wait to read your book about pioneers!” Ah, no, no, no. So now I say, “I’ve written this book about twin sisters, it’s set in 2009, they were born with psychic abilities, one of them has tried to suppress it and one of them has become a professional psychic. And the professional psychic ends up going on national television and predicting there’s going to be a major earthquake in the St. Louis area.” And then sometimes I say, “You may not know that in 1811…” But I try not to lead with that.

Have you experienced an earthquake in St. Louis yourself? I have! In spring 2008 there was a mild earthquake in St. Louis. I had a vague idea about the New Madrid earthquakes before I moved here. But I think what actually made me decide to write this particular novel is that I was talking to a friend who grew up in Jefferson City, Missouri, and he said that in 1990 someone predicted that there was going to be a huge earthquake on a particular date in the area. And craziness ensued: People were really worried. [The prediction came from]  sort of a self-described climatologist named Iben Browning. Everyone who lived in St. Louis at the time remembers it. I was talking with another mother at my daughter’s gymnastics class; she said she was in college at the time and her mother had her come home and they all slept in the family room. Another friend, a law professor, said she was teaching a class when it was supposed to occur. She felt she couldn’t cancel the class, but she put running shoes in the trunk of her car just in case. People were stockpiling water and that sort of thing.

That kind of answers my next question: Which was the first idea behind the novel—the earthquake, or the psychic twins? I guess the earthquake came first. But I think twins are infinitely interesting. I have two children now; my older daughter’s 4 and she’s been [in pre-school] with—I swear—10 different sets of twins. I wonder if twins won’t have the mystery and intrigue for her generation that they do for an older generation because they’re so common now.

Did you talk with any twins in writing this book? I don’t want to violate anyone’s privacy, but we have a family friend who was pregnant with twins in 1975 and she didn’t know until the day before she delivered them that she was carrying twins. She very graciously answered a lot of questions. But she’s this lovely, warm woman who is not like the mother in the book! The experience is not her experience. There’s another mother of a friend who had the experience of having an epidural only work on half of her body, so I borrowed that detail too. But it’s not the same person. And I’m friends with twin sisters, and I definitely had them vet the book. It also happens that my British editor is an identical twin. It’s one of those things; once you start looking for twins, they’re everywhere.

One of the things about your novels is that your characters are so vivid—absolutely unique, but also absolutely believable and familiar. You must be a really acute people-watcher. That’s a generous way to put it. As opposed to “a spy” or “an eavesdropper.”

You’ve got a real ear for dialogue, too. I noticed you’ve used the current verbal tic of people starting sentences with “so.” It’s funny, because my dad has been commenting on that, and I said, “It’s all over my book!”

Was that deliberate? I try to make the dialogue sound realistic. But I don’t know if I’m consciously thinking, These are words that people use now. The sisters both overuse the word “awesome,” which I think is something that people of my generation do. So there’s a blend of consciously trying to make it realistic and stuff just working its way in.

You have two kids now. How is your writing getting done these days? I have a nanny—I’m more comfortable saying “babysitter,” that sounds less pretentious—30 hours a week. I don’t want to give the impression that it’s, like, “My daughter is playing with blocks while I’m on my laptop.” I’m not in the same room with my children when I’m writing fiction. There are people who can do that. I’m not one of them.

How long did it take you to complete Sisterland? It took me three and a half years. And just to brag, I did have one of my children during that time. [But] I let a lot of things fall by the wayside. I write and I hang out with my children. Then there’s tons and tons of other stuff I don’t do. Like, today I got my hair cut for the first time in a year. There are many ways that I am disorganized. But if you’re holding a book in your hand that I wrote, it can make you think that I am more pulled together than I am.

You’ve lived in St. Louis since 2007. Is the city as much like Cincinnati as some people say? It’s hard for me to evaluate because I haven’t lived in Cincinnati as an adult. I’m very much my parents’ child or my brother’s sister when I’m in Cincinnati. So I feel more like a grownup in St. Louis. But a lot of the positive and negative ways you can describe both cities are similar. You could say there’s racial tensions in both cities, a fair amount of segregation and poverty issues. You could also say it’s a good place to raise children, the quality of life is high, real estate is pretty affordable, and people are pretty friendly in the Midwestern way. And both cities are a lot more culturally rich than some people on the coast would give them credit for. There are interesting restaurants in both places, people are putting on interesting plays, things like that. I still think that in 2013 there are people from New York who’d say, “You have goat cheese in Cincinnati? You have goat cheese in St. Louis?”

As in Prep and American Wife, in Sisterland your main character is a female from the Midwest. Would she be very different if the setting were different? I guess my default would be to write from the perspective of a Midwesterner. I’m not sure what the reason to write from the perspective of someone from Massachusetts or California would be. But I’m not a native of St. Louis so I did a lot of research to make sure I got things right. I toured the junior high and high school that the twin sisters would have attended, and I had two St. Louisans read the whole book and say if there was anything that seems wrong. I feel a strong sense of wanting my book to be accurate and enjoyable to people who are familiar with different aspects of it. I felt this way with American Wife, too. If you knew about life in Washington, D.C., I wanted it to seem accurate. The same way with this: If you’re a twin, I wanted it to seem plausible; if you’re from St. Louis, I wanted it to seem plausible; if you’re a psychic, I wanted it to seem plausible.

Speaking of psychics—a lot of your readers might consider that implausible. I think it would be possible for me to describe this book in a way that would sound really paranormal, but it’s actually not. It’s a novel about being a mom in the suburbs. When I was writing it, my dad would say, “Are you still working on that book about the psychic twins?” The implication being “…or have you come to your senses and chosen a different topic?” [Laughs]. But I guess I just tried to treat it matter-of-factly. And the main character in some ways is skeptical about her own psychic-ness, and I think that her skepticism can be a stand-in for the reader’s skepticism.

As a reader, I can’t help but look at a piece of fiction and search for elements that might be drawn from a writer’s life. The scene with Vi on the Today Show being interviewed by Matt Lauer: Did that come out of having done interviews yourself? I was on the CBS morning show, but I think that’s the only time I’ve been on national television. I’ve had some degree of public exposure, but I’m essentially not a public person, not a famous person. Maybe there’s an article about me in The New York Times. But the day that it comes out, I’m sitting in my house doing laundry. There’s this perception that if you receive any sort of public exposure you’re having a life of nonstop glamour. And certainly for me that’s not true.

Are you working on a new book now? I am. It’s kind of related to Cincinnati. A British editor at HarperCollins decided to create this project where six writers will retell contemporary versions of Jane Austen’s six novels. And they asked me if I would like to re-write Pride and Prejudice. I think they asked me partly because I’m American; they wanted at least one to be set in the United States. And my current plan is to set it in Cincinnati. We’ll see. I hope I can. I have to figure out the logistics of—how well do you know the characters?—things like when Bingley goes away, then he comes back. So where does he go? It’s a little different when the distances between Cincinnati and New York or Chicago are not quite what they are [between] little English villages. It’s definitely a departure. I don’t think I would have thought of doing it on my own. But when someone says, “Can we commission you to re-write Pride and Prejudice?” there’s only one answer.

Does this mean we’ll see you in town doing research? Eavesdropping? Possibly.

These Are the Coolest Treasures in the Cincinnati Public Library System, According to the Experts