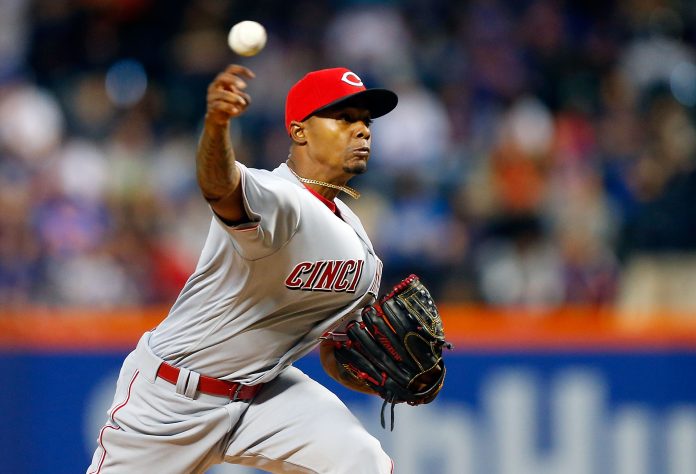 “I want to be the closer. I feel proud of myself, I feel as proud as when they told me I was going to be the Opening Day starter. I feel really, really happy right now.” — Raisel Iglesias, via translator Julio Morillo, after notching his first career save on Tuesday night.

Damn you, Jerome Holtzman! Damn you!

The most gifted, stop-what-you-are-doing-and-watch pitcher on the Reds wants to pattern his career after Francisco Cordero. Grrreat!

Recurring issues with the 26-year-old right-hander’s throwing shoulder have the clock ticking on Iglesias’ future as a starter. The Reds provided Iglesias with a seven-year, $27 million deal just over two years ago with the intention of having the 6-2, 185-pound Cuban be a member of the rotation for years to come, but through his first two seasons with Cincinnati, Iglesias and his shoulder have failed to hold up to the rigors of starting. It’s quite plausible that Iglesias’ shoulder simply can’t withstand the necessary workload of throwing 100 or so pitches every fifth day for six consecutive months.

And yet, Iglesias has struck out 131 batters in 120.2 career innings as a starter, so the Reds can’t give up on having him start just yet. And fortunately for the Rebuilding Reds, time is on their side.

But, if another report of Iglesias battling shoulder fatigue surfaces next spring and to the bullpen he goes, so be it. However, the Reds should not make Iglesias’ the club’s closer, because limiting Iglesias to strictly the role of closer would be a waste for four reasons:

The supreme necessity of a closer is a myth—for bad teams and for good teams.
Exhibit A for this argument is former Reds closer Aroldis Chapman, who piled up 69 saves from 2014-15 pitching for two Reds teams that combined to lose 184 times.

Also, sporting a shutdown closer isn’t a prerequisite for playoff qualification. Via MLB.com:

“Over the 10 seasons from 2005-14, at least 12 teams made the playoffs without having one pitcher collect 60 percent or more of their total saves. In some cases, an injury struck. Other times, the original choice simply struggled and was replaced with an internal choice or a trade acquisition.

“… To look at this phenomenon from a different angle, research last season showed that almost one-third of postseason qualifiers from 2004-13 had changed closers by the time they reached October.”

Bad teams typically don’t receive as many save opportunities as good teams.
The rules state that a team must, you know, be actually winning the game to incur a save opportunity. (Official rules for a save situation can be found here, under Rule 10.19). Iglesias recording the final outs for bad-to-possibly-average Reds teams over the next few seasons would function as the sequel to Chapman burning through opposing hitters for those hopeless 2014-15 Reds.

Iglesias’ ceiling is higher than that of a typical closer.
The great tragedy of Chapman’s tenure with the Reds was two-fold: not only was the Missile never given a shot to start in the majors, but after he rose to the closer role in the 2012 season, Chapman—a starter in Cuba before he defected—pitched more than one inning on just 19 occasions out of the 255 games he appeared in for Cincinnati over the next four years.

Iglesias could very well follow in that path—unless the Reds buck tradition and get creative.

Modern bullpens have fallen victim to rigid roles because the system breeds job security on both sides. If a manager knows he has a seventh-inning guy, an eighth-inning guy, and a ninth-inning guy, strategy is less complicated and there is less second-guessing if a breakdown occurs. And relief pitchers prefer security too; like any other employee, relievers feel more comfortable at their job when their role is clearly defined.

It would be up to the Reds to convince Iglesias that as a bullpen arm, he would be best used in the role he currently occupies: a multi-inning strikeout monster. In 27.2 innings as a reliever this season, Iglesias has recorded a 0.65 ERA with 31 strikeouts and has allowed just two extra-base hits. He’s also pitched at least two innings in 11 of his 15 relief appearances.

In fairness to Holtzman, he didn’t invent the save statistic. But he did popularize the save stat in the 1960s and by 1969, MLB had made the save an official statistic. Fast forward to 2016, and closer is one of game’s glamour positions because of A) the money good closers make and B) highlight packages love to show the final outs being recorded.

But, again, the Reds have time on their side to see if Iglesias can start. And there’s one big roadblock to Iglesias being the Reds’ full-time closer: he has yet to pitch in back-to-back games at any point during his major-league career. Sometimes, closers are asked to pitch two, three nights in a row.

So maybe Iglesias’ shoulder will actually save him from himself, and he won’t become the next Francisco Cordero—or even Aroldis Chapman.

*This post has been updated to include a link to the original story featuring Iglesias’s comments on Tuesday. Sorry, we forgot!