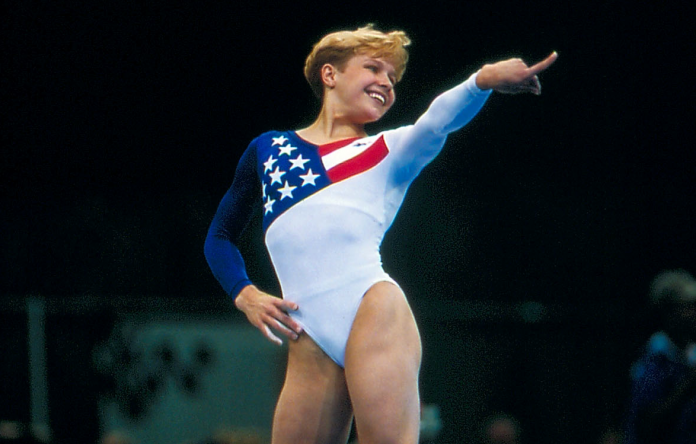 Before Simone Biles, Aly Raisman, and Co. dominated the world in Rio, before Gabby Douglas led the charge in London, there was the Magnificent Seven. Heading into the 1996 Olympic Games in Atlanta, the United States had been the bridesmaid to countries with rich gymnastics legacies, namely Russia and Romania. That changed when a group of seven women assembled in Atlanta and ushered in a changing of the gymnastics guard. But before the team competed, they needed to choose a captain.

Three of the gymnasts—Dominique Dawes, Shannon Miller, and Kerri Strug—had been to the 1992 Olympics, and others were national champions. Amanda Borden, a 19-year-old from Finneytown, Ohio, was not an Olympic or national champion. Yet, when the votes came in, it was a unanimous decision. Every one of Borden’s teammates chose her to lead their team to the United States’ first gold medal in the women’s team competition.

“She was kind of like the team mom in a way,” says Jaycie Phelps, a member of the Magnificent 7 who trained in Cincinnati with Borden. “Everyone felt comfortable around her, and she was always the person we went to.” Phelps was like a little sister to Borden, and she says that the two of them, along with their coach at the Cincinnati Gymnastics Academy, Mary Lee Tracy, who also served as an assistant coach in Atlanta, were an amazing trio.

Tracy says that she knew her student had what it takes to be an Olympian when she was 12 or 13 years old. “Amanda was a hard worker back then and she still is now,” Tracy says. “She continually wants to improve and get better.”

Starting in the 8th grade, Borden began training before and after school, totaling around 35 hours each week. There were plenty of sacrifices made, but Borden never felt like she was giving up anything that she wanted more than gymnastics. “I had a bit of an old soul mindset, knowing that I had the rest of my life to hang out and do these fun things people talked about,” Borden says. “It was easy for me to see that this was my one chance to be a great athlete.”

Even after Team USA’s victory propelled the gymnasts to fame in the year and a half long tour that followed, Borden stayed grounded and humble. “I just felt like I was 19-year-old Amanda from Finneytown, and all of a sudden it was like we were stars,” she remembers. “Sometimes I didn’t know what to do, but our fans were unbelievable and so supportive.”

She credits her parents for helping to keep her life balanced and emphasizes how important her family is to her. Today, Borden lives in Arizona and has three children, including a nine-year-old daughter that is already following in her footsteps. “It’s funny to now be a parent of a gymnast, since for my whole life I’ve either been the gymnast or the coach,” she says. “She’s extremely competitive, and I see a lot of her in me.”

Borden uses the leadership skills she learned from Tracy’s coaching and honed as captain as she runs her own business. After studying elementary education at Arizona State University and teaching for about two and a half years, Borden realized she could combine her passion for education and gymnastics. Along with her husband, who has a business background, Borden opened Gold Medal Gymnastics in 2004, where she juggles coaching four days a week, running competitive level and recreational summer camps, and managing the company. “With every step, we grow and learn a little bit and get a little bit better,” Borden says. “That’s kind of my life mentality—that each day you want to be one day better.”