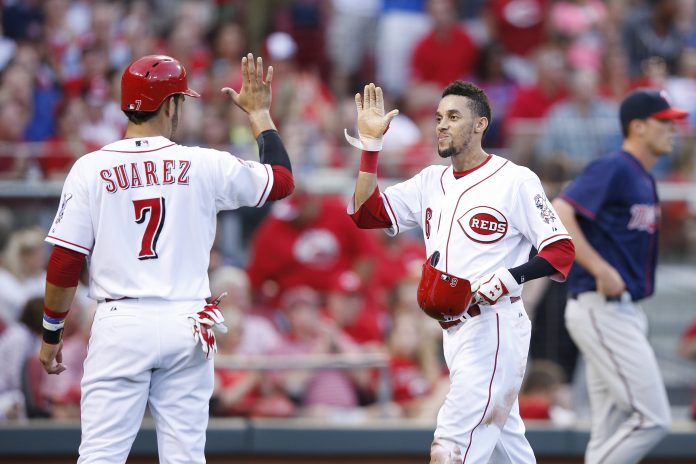 It’s the end of June and the Reds are bad, bad, bad. You, tortured fan, are hurting. Maybe your crisis is even existential. What is it that you get from baseball? Why do you keep returning only to be hurt over and over again when there seems no promise of relief? No gain to possible from your metaphysical pain?

Well, I have hope for you. A light down the end of a long tunnel that, I promise you, is the sun and not an oncoming train. And here is the thing I offer:

Next year, the Reds will finish second in the NL Central division.

Yes, I am serious. Completely and utterly. But before delving into my explanation, I want you to do two things for me: First, acknowledge that this year doesn’t matter. Second, acknowledge that, to the extent it does matter, it is about turnover and letting the kids have some growing pains. Now, onward.

So what determines the standings? Two things. The quality of our beloved Redlegs and the quality of the competition. Let’s start with the latter.

The Competition
Let’s be clear. The Cubs are a juggernaut (I know, weird, right?). No one is passing them next year. As for the rest of the Central…

Pirates—Aging with suspect pitching that has never quite put it together. They’ve reached the end of their competitive cycle.

Cardinals—We should never count them out, but they also have an aging core and may finally be due for a  reload soon. I see them as analogous to the 2014 Reds.

So, to put it mildly, the competition for second place isn’t stunning. Will the Reds improve enough to claim silver? Let’s look.

The Reds
Since the pitching has made everyone so anxious this year, let’s start there. I could, I suppose, go in-depth talking about the pitching this year, but why would anyone want to do that? Let’s just suffice to say that the staff will see huge turnover next year and instead look at who we’re going to see. I’ve written about most of these guys already, so apologies for any repetition below.

Here is a reasonably likely 12-man staff for next year, with 2017 seasonal age in parenthesis.

My money would probably be on Lorenzen as the last starter with Finnegan in the bullpen and Amir Garrett finishing his seasoning in Louisville, but we’re far enough away that it’s good to leave some room for uncertainty.

The first thing you should notice is that all of those players are currently in-house. This list represents only natural promotion and the shifting of roles that could reasonably result. It is a pitching staff that, with the exceptions of Homer Bailey and Blake Wood, is entirely on the right side of the aging-curve AND is dirt cheap (as major league staffs go), with most of the players not even in arbitration yet. I’m sure there will still be growing pains, but I’m also sure it’s a staff that other teams will need to take seriously. Particularly the starting rotation, which could easily boast five above-average starters. And above-average, my friends, is how you spell second place—don’t question me on this, I teach English and I’ll give you detention.

The Lineup
So, you know how the rotation is currently turning over like crazy? That’s what’s about to happen with the lineup over the next 12-14 months, so the picture here is much less certain. The only players I feel completely comfortable saying will get the bulk of the playing time at their given positions (barring injury) are Joey Votto and Jesse Winker. Still, with the exception of catcher, where the future is extremely foggy and where the Reds have to wait for some young players to get ready, it’s possible to construct an idea of a lineup that will probably, maybe, perhaps look something like this (age in 2017 in parenthesis again):

The above lineup obviously assumes that Jay Bruce and Zack Cozart leave via trade. Nick Senzel is expected to move quickly with a late-2017 arrival at least possible. It seems logical that once he does come up, Suarez will slide over to second (if he hasn’t already been moved off third by then).

The important thing about this group is how young it is. The vast majority of the players listed above still have time to develop. Many, many people are ready to give up on the likes of Suarez and Hamilton, but there is a reason you don’t give up on young guys. In the particular case of Billy Hamilton, I highly recommend you go look at the early-career hitting exploits of Ozzie Smith and Davey Concepcion. They were both elite defenders with slight builds and it took time for them to figure out hitting in the major leagues. Let the kids play. That’s how they get better. And next year, the lineup will be better than it is this year.

Conclusion
So there’s your team for next year. Or most of it, at least. Is it a world-beater? No, not yet. Too young to count on, but also young enough to surprise, and in a division that doesn’t figure to put up stiff competition except from the Cubs (which still feels so wrong), it should be more than enough to push the Reds to a respectable second place and prime the pump for a return to truly competitive baseball in 2018. Take a deep breath, Reds fans. The worst is almost over.