Home Sports Baseball Who is the Reds 2016 All-Star? 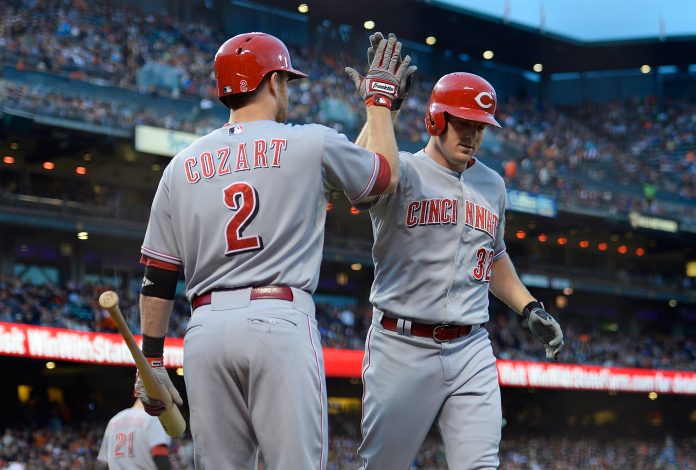 I’m a sucker for the All-Star Game.

I just love (almost*) everything about it, that’s all. I love the history of the game: Ted Williams’ walk-off homer in the middle of his historic 1941 season. Carl Hubbell striking out five Hall of Famers in a row. Tony Perez’s game-winning home run in 1967. Fred Lynn’s grand slam. Randy Johnson vs. John Kruk. Pete Rose vs. Ray Fosse.

I love watching the players line up, and seeing the introductions. I love how excited players seem to be. I love the cheesy pre-game tributes—Franchise Four!—that seem to take place every year now. I love that it’s called the “Midsummer Classic.” I even love the Game when it’s not held in Cincinnati.

*I say “almost” because there’s one thing I don’t love. Former Commissioner Bud Selig had the bright idea to decree that home field advantage in the World Series would be awarded to the league that won the All-Star Game. Just a ridiculous rule. This is a glorified exhibition game, but Selig thought it would be a good idea to “make it count.” Yes, I’m still bitter about this nonsense. Can you tell?

As much as anything else, I love the discussion about who will make the teams. The voting, of course, is well underway, and our Redlegs aren’t faring so well at the ballot box. (This is not 1957, after all.) At the moment, only one Red appears on the leaderboard at any National League position: Zack Cozart is fifth among shortstops, more than a million votes behind Chicago’s Addison Russell.

So, no, it looks increasingly likely that we aren’t going to get one of the hometown guys into the game by the voting process. (Though you never know.) But there is definitely going to be at least one Red on the NL roster when it is announced. Because they have to take one player! It’s a rule!

Fortunately, the Reds actually have some deserving candidates for that honor. Assuming that Cincinnati gets just one representative—and that’s a reasonable assumption, given the fact that the club currently has the second-worst record in the league—who will that sole All-Star be?

Let’s begin with the team leaders in WAR:

If you look at who has been most productive for the Reds, Zack Cozart seems like the top choice for the Reds’ lone proxy. And he wouldn’t be a bad choice. He’s cooled off recently, but Cozart is still hitting .283/.323/.506 with 11 home runs, and his defense is just as good as it’s ever been.

Cozart stacks up pretty well against the rest of the shortstops in the National League, too. Only the Dodgers Corey Seager has been clearly better, although Brandon Crawford (Giants) and Trevor Story (Rockies) have pretty good cases. Unfortunately, as noted above, Addison Russell is leading the voting—thanks to the ballot-stuffing exploits of Cubs fans—so there will be one fewer spot available for NL shortstops.

From the Cincinnati perspective, Cozart is the sentimental choice to secure his first All-Star selection. On the other hand, a fun—and surprising—All-Star would be Duvall. I mean, think about it: before the season, who would have predicted that Adam Duvall would even be in the conversation to represent the Reds in the All-Star Game?

He has his flaws as a player, but smashing baseballs into pulp is not one of them. Duvall has 21 homers and 51 RBI to go along with a slash line of .261/.295/.601. It’s hard to make the argument that Duvall has been one of the elite outfielders in the league—he only ranks 10th in wins above replacement—but he is tied for the NL home run lead with Colorado’s Nolan Arenado. If Duvall is leading the league, or even in the top two in homers at the All-Star break, there’s a pretty good chance that he’ll sneak onto the roster.

Plus, imagine how much fun it would be to see Duvall participate in the Home Run Derby.

Really, there’s only one other Reds player who has a chance. It’s not Dan Straily, who is third in WAR on the club so far. Straily has been a great story, and he’s has a good season, but he’s only 4-4 with a 3.83 ERA. Not All-Star numbers. It won’t be Joey Votto, even though he’s returned to being Joey Votto lately.

No, the other guy I’m talking about is Jay Bruce, who barely appeared on the WAR chart above. There’s a reason for that. The defensive metrics—which are a component of WAR—think Bruce is having a terrible season with the glove. Now, I’m not here to tell you that Bruce is a Gold Glover these days. He’s not. But these metrics are notoriously unreliable in small samples, and I argue that Bruce hasn’t been as bad as they suggest.

Offensively, on the other hand, Bruce has been nothing short of amazing. He’s hitting .285/.336/.594 with 16 homers and 55 RBI. Despite Duvall’s heroics, Bruce’s bat has been the most productive on the team, leading the club in wRC+ and wOBA. He’s just been fantastic, and has a great case to make his third All-Star team. Given his recent struggles over the last couple of years, it’s been pretty heartwarming to see him bounce back so effectively.

Speaking of wRC+ and wOBA, Bruce actually ranks fourth among all National League outfielders in those advanced metrics. He’s hitting like crazy, and he’s just so darn affable. How can you dislike Jay Bruce?

Clearly, the Reds should sign him to a billion-dollar contract extension.*

*Or maybe that’s not the best allocation of resources.

The problem that Duvall and Bruce may have is that there are a lot of good outfielders in the National League who can make the case to be on the team. There could be a numbers crunch. If you ask me who the most deserving All-Star is, I’d have to say Bruce. If you ask me who I’d like to see make the roster, I’d say Zack Cozart, since it would be his first opportunity to play in the game. If you ask me who would be the best story, and the most fun, I’d say Adam Duvall. Whatever happens, NL manager Terry Collins can’t go wrong with any of these guys.

And though I won’t be in the stands this year as I was last July, I’ll be watching on television. Just in case there’s another moment that goes down in baseball lore.