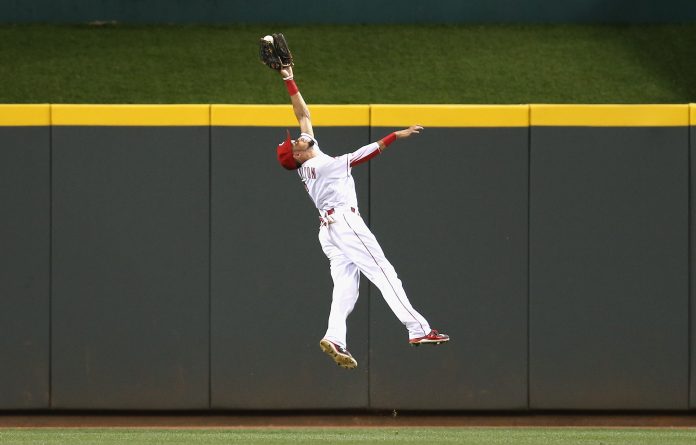 Billy Hamilton is better than you think.

Maybe that’s not fair. I don’t want to paint you, dear reader, as being ill informed. I would never do that. Let’s be honest: you’re reading Nuxhall Way, so you’re clearly more informed than the average Reds fan, right? (…right???)

So let me phrase it a bit different. Billy Hamilton is a much better player than I realized before I started digging into his numbers.

We all know that Billy is freaky fast, and we’ve all delighted at the havoc he creates on the base paths. Take Monday’s night’s game against the Cubs, for example: Hamilton went 1-2 with a sacrifice bunt. He walked twice. He stole two bases. He scored twice. He collected an infield single that was made possible only by the fact that he was able to run to first base faster than Chicago’s pitcher was able to run from the mound to cover first. At his best, Billy Hamilton is one of the most exciting players I’ve ever seen. The SportsCenter highlights have attested to that.

But his deficiencies are equally as well-documented. He can’t bunt very well, as Marty Brennaman tells us occasionally. He doesn’t get on base particularly often, as his on-base percentage tells us. He’s not the leadoff hitter that many of us wanted him to be.

Ordinarily, I’d look at a guy with a career slash line of .245/.288/.337 and ask loudly why that player isn’t on the bench, or in Double-A, or managing a grocery store somewhere. I mean, look at Hamilton’s list of similar batters, based on Baseball-Reference’s algorithm. The most similar player to Billy in baseball history is the immortal Pepe Mangual, for crying out loud.

But let’s dig a little deeper. First of all, keep in mind that Billy is just 25. He was born a month before the Wire-to-Wire Reds captured the 1990 World Series, which tells me two things: (a) it’s been a long time since the Reds won a championship; and (b) I’m old.

Actually, it tells me a third thing: Billy Hamilton is still young and should be expected to improve for at least the next couple of years. And he definitely is improving as a player. But more on that in a minute.

First, take a look at this chart. It’s a leaderboard for UZR/150 (a park-adjusted statistic that attempts to measure, as FanGraphs describes it, how many runs a player saved or gave up via their fielding prowess, or lack thereof) among big league center fielders over the last three years. Then, you can look at this chart, which ranks CFs for their value on defense compared to the league average.

We can argue about defensive statistics and what they can tell us and whether they’re completely accurate. But Hamilton’s statistics are exactly what you’d expect if you’ve been watching him every day. The available evidence points to one conclusion: Billy Hamilton has been the best defensive center fielder on the planet over the last three years.

And here’s a scary thought: Hamilton is still learning the position. He’s only been playing center field for those three years. It’s not inconceivable that Billy could actually improve out there in center. Think about that for a moment. It’s glorious.

How about another chart? What this shows you is a list of all major league players, sorted by FanGraphs BsR stat, which tries to measure a player’s contributions on the base paths. (Here’s how they come up with the number, if you’re interested.) Long story short: over the last three years, Hamilton has been the most valuable baserunner in the game, by a large margin.

When it comes to defense and baserunning, Billy Hamilton has already proven himself to be a special player. But you probably already knew that. We’ve always said: If Hamilton could just be a league-average hitter, he’d be one of the best players in baseball!

The problem, of course, has been the fact that Hamilton has simply not been able to hit. Last year, if we’re being honest, Hamilton was arguably the worst batter in the major leagues, “hitting” just .226/.274/.289. His wRC+ of 52 is almost impossibly bad, one of the worst in baseball.

Yet Hamilton was still a two-win player (by WAR), which made him roughly average, thanks to the aforementioned defense and baserunning. And here’s where we get to the good part.

Hamilton is improving as a hitter! Last year was awful, and I’m not good enough with numbers to figure out a way to disguise that fact. And his numbers at the plate this year aren’t exactly great either, but they are better: .258/.300/.376, .293 wOBA, 78 wRC+. What that tells me, on the surface, is that he’s learning and making improvements…and that’s exactly what you want to see from a 25-year-old. He’s not as bad as he was last year, and there is reason to believe he’ll keep following that pattern.

I’m actually pretty optimistic about that, if you can believe it. As they’ve noted at FanGraphs, there are some very encouraging signs once you look into the analytics underlying Hamilton’s performance this year.

Even better, Hamilton is also hitting those grounders harder than ever. A lot of what we know about baseball is going to be affected by the increasing data from MLB’s StatCast. Exit velocity, or how fast a ball comes off the bat, is among the most interesting data available.

And here’s yet another reason I’m optimistic about the possibility that Hamilton is making real strides that can be sustainable—and even improved upon—in the long-term. Look at this table that shows Hamilton’s data on grounders over the years. Billy is hitting his grounders much harder than he ever has before; 17.4% of Hamilton’s grounders are measured “hard-hit,” compared to last year’s 12.8%.

So he’s hitting more ground balls and hitting more of those ground balls hard. That’s manifesting itself in more balls getting through the infield, which means more chances for Hamilton to reach base. And when Hamilton reaches base, he’s an elite player. Sure, there are small sample size caveats that we should consider, since we’re only 200+ plate appearances into the 2016 season. But the early returns are very good.

Here’s the thing I think is incontrovertible, according to the numbers: When you consider the entire package, Billy Hamilton—at this very moment—is already an above-average center fielder. And he should be expected to improve over the next couple of years. Reds fans who have been clamoring for his head should probably be glad that the team made the wise decision to stick with him. Billy may not turn into an elite center fielder, but I think there’s still a decent chance that he will put together a productive career.

I’m actually pretty excited about Hamilton’s chances to be an All-Star center fielder in a couple of years. If that happens, I may write a musical about him.