Home Sports Baseball Joey Votto is not an All-Star. But he is the best Reds... 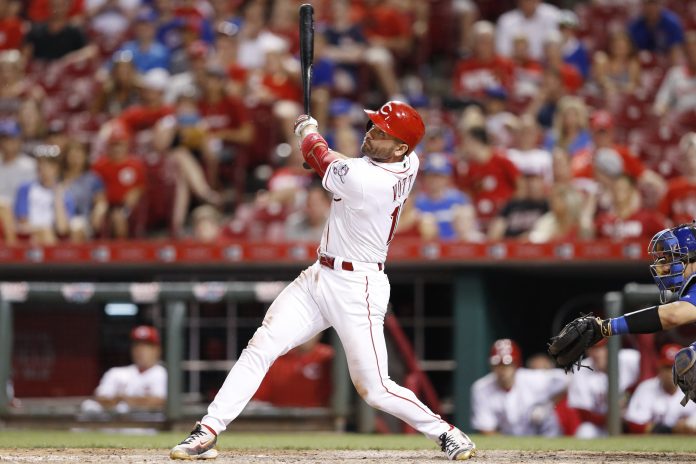 Shh. Shhhhhhhhhh, quiet. Now, come over here. I have a secret to tell you.

So, you know how the Reds have two hitters going to the All-Star game, right? Yeah, that’s pretty cool. Those guys are having good years. But do you know who’s been the best hitter for the Reds this year? It’s not Bruce or Duvall. No, it’s this guy you might remember from the last few years. This kid named Joey Votto.

In fact, not only has Joseph Daniel been the best hitter on the Reds, he’s still the best player on the team and it’s not close.

The hitting thing is pretty cut and dried. Votto hasn’t slugged as highly as Duvall or Bruce this year, but his on-base percentage more than makes up for that. wRC+, a stat that tells you how far above or below average a hitter is compared to his peers, has Votto at 121 (21% better than average). Bruce is at 117 and Duvall checks in at 115.

Now, you can argue with me about the “best player” thing if you want. Zack Cozart has really had a great year and his defense matters a lot. But when I talk about best player, I’m talking about the player most likely to continue performing at a high level. And that, friends, is Joey Votto.

Baseball fans everywhere are guilty of sometimes developing a bit of a football mentality. They worry too much about what a player has done recently and forget that chance plays a huge role in baseball stats over the short-term. Earlier this year, Votto had the second worst slump of his entire career. It was surpassed only by a period late in his rookie season. However, there were no fewer than three different articles all using good analysis to point out that he had been epically unlucky.

Now, you’re smart, I know that, so you are probably thinking: Wait a minute, you were just talking about sample size. You are correct. Now, go back and check out those article I linked. I know we’re getting into deeply stats-y stuff here, but what it comes down to is this: For the first, oh, 45 games or so, Votto was hitting the ball plenty hard, but he wasn’t “hittin’ ‘em where they ain’t,” as the saying goes. Since then, he’s continued to hit the ball hard, but now the hits are falling at the rate we’d expect.

Joey Votto is in the decline phase of his career. There’s not doubt about that. But we can’t forget that he has a lot of declining to do before he starts being a bad player. Last year, he was worth 7.4 wins above replacement according to FanGraphs. He also finished 3rd in the MVP voting while playing for a last-place team, which tells you it wasn’t just the fancy stats that thought he was great last year.

And keep in mind that Votto has the highest career OPS of any Reds hitter—ever. Ever. Higher than Joe Morgan. Higher than Frank Robinson. And we can talk about eras if you want, too. Because Joey Votto’s insane OBP abilities deserve some context. He is currently 17th in OBP in the history of baseball. The only player in front of him to debut after 1950 is Barry Bonds. Pause for a moment and think about the magnitude of that.

So not only does Joey Votto remain the best player on the team and extremely likely to perform at a high level for several years to come; he’s also the best overall hitter any Reds fan has ever seen—and if you want to discuss it, the only other names that should come up are Morgan and Robinson.

Joey Votto may not be an All-Star this season, but he’s still the best reason to watch the Reds play.