Home Sports Break Off a Little Preview of the Rebuild 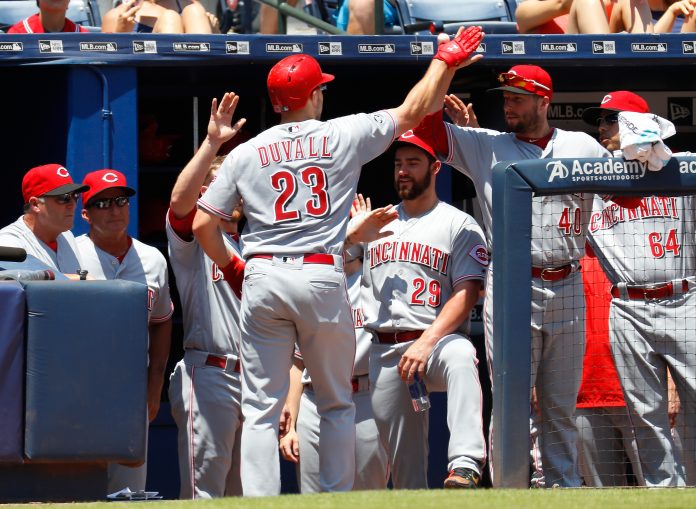 Rebuilds are a nasty beast, a fact even the most sanguine of Reds fans have surely figured out now that the 104-loss pace of Cincinnati’s professional baseball club ventures more into the realm of certainty than fantasy. (I bet you weren’t planning on witnessing 39 games of Ross Ohlendorf, were you Sir Optimism?!)

And so, 2016 serves as Year 1 of the Reds’ multi-season reconstruction, and through the squad’s first 89 tilts, we have beared witness to a bevy of young players thrown into the fire, a horde of veterans playing with varying results, and quite frankly, a gaggle of players who do not belong in the major leagues. But at least the Reds are not alone in their rebuilding misery; other than Cincinnati, four other National League franchises are partaking in some form of sorrow-breeding renovation: the Braves, Brewers, Padres, and Phillies.

As fate would have it, the Reds are set to welcome Brewers and Braves in the first two series to begin the second half of the season. (It’s too bad the All-Star Break arrived following the Marlins’ ransacking of the Reds’ in Miami, as we were seemingly on the verge of another profane harangue from Cincinnati skipper/Mad King Bryan Price.) For the purposes of this column though, we will focus the rebuilding lens on the Braves, Brewers, and Reds.

From 2009-13, Atlanta finished above .500 five times, won at least 91 games on three occasions, and reached three postseasons. However, much like the 2010-13 Reds, that version of the Braves lost in their lone NL Wild Card Game appearance, as well as both of their forays in the divisional series. Weeks before a disappointing 2014 season came to a close (the Braves finished 79-83), general manager Frank Wren was fired. Eventually, John Coppolella and John Hart would be named general manager and president of baseball operations, respectively, and the rebuild was on in Hotlanta.

The first move by the Braves’ new management was to flip 24-year-old outfielder Jason Heyward and reliever Jordan Walden to the Cardinals for starter Shelby Miller and pitching prospect Tyrell Jenkins in mid-November. A month later, Atlanta traded Justin Upton (who hit 56 home runs and drove in 172 runs over two seasons with the Braves) to the Padres for cadre of young players. Evan Gattis was the next domino to fall, sent packing to the Astros for three prospects. Then, on the eve of the 2015 regular season, closer Craig Kimbrel, a four-time All-Star with Atlanta, was sent to the Padres (along with Melvin Upton Jr.) for four players.

The Braves made a flurry of lesser changes throughout the regular season, but the next two big moves were in November (Gold Glove shortstop Andrelton Simmons to the Angels) and December (starter Shelby Miller to Diamondbacks).

The Braves are stockpiling arms on top of arms. Two of Atlanta’s young starters, Mike Foltynewicz (24-years-old) and Matt Wisler (23) were acquired in the Gattis and Kimbrel trades, respectively. Double-A southpaw Sean Newcomb—No. 33 on Baseball America’s midseason ranking of the top 100 prospects in the game—was picked up in the Simmons swap. Overall, 11 of the Braves’ top 15 prospects in FanGraphs’ preseason ranking of the system are mound-toters. And yet, FanGraphs’ overview was published before Atlanta’s greatest coup to date in its rebuild: the Shelby Miller trade.

Miller, who was originally shipped to the Braves in the Heyward/Walden exchange, logged a 3.02/3.45 ERA/FIP over 205.1 innings for Atlanta in 2015. In their lust for 2016 contention, the Diamondbacks vastly overpaid for Miller, surrendering shortstop Dansby Swanson (the No. 1 overall pick in the 2015 draft who is slashing .285/.373/.440 across High-A and Double-A in 2016), outfielder Ender Inciarte (a 5-WAR player in 2015 who is under team control through 2020), and Aaron Blair, a former top-100 prospect who made his major league debut earlier this season at age 23.

To further illustrate the Braves’ focus on young pitching, we can note that the organization selected six pitchers with with its first seven draft picks in the June amateur draft. Out of its first 14 selections in 2015, Atlanta picked 12 pitchers. The influx of young talent, particularly on the rubber, has certainly convinced talent evaluators; after slotting in at 29th in Baseball America’s farm system rankings entering the 2015 season, the Braves ranked third on that same list for the 2016 campaign.

But when will all of this young pitching be ready to win in the majors? Unfortunately for Atlanta’s ticket sales personnel, the club won’t be a winner in time for the Braves move’ into SunTrust Park next spring. Given that the crux of the organization’s top-end talent is situated at Single-A and Double-A—Atlanta’s current lineup is actually quite ancient in baseball terms, as it contains five regulars who are 31 or older—the Braves are looking at return to contention in 2018-19, provided they can locate the bats to augment what could be a dynamite rotation and bullpen.

The aforementioned trades of Fiers (Astros), Gomez (Astros), Parra (Orioles), and Broxton (Cardinals) were the principal blows in the teardown before first baseman Adam Lind was shuffled off to the Mariners last December for three pitchers. To this point in 2016, Milwaukee has made three additional trades of note: moving shortstop Jean Segura to the Diamondbacks, sending starting left fielder Khris Davis to the Athletics, and trading infielder Aaron Hill (acquired in the Segura trade) to the Red Sox.

General manager David Stearns pulled off a heist in November when he swiped shortstop Jonathan Villar from the Astros in exchange for minor league pitcher Cy Sneed. The 25-year-old Villar, who is under team control through 2020, is slashing .298/.380/.426—an impressive line that is admittedly propped up by an unsustainable .410 batting average on balls in play—and could provide value for the Brewers in the future as either a trade candidate or with a possible move to third base to make way for top prospect Orlando Arcia.

The Brewers’ turnaround in terms of overhauling their farm system has not been quite as abrupt and effective as the Braves, but major progress has been achieved. From 2011-15, Baseball America positioned Milwaukee’s system between 21st and 30th in each season; in its rankings preceding this year, Baseball America slotted the Brewers ninth, a reflection of both the star power and overall depth attained by the organization since the rebuild commenced

The seemingly-imminent trade of two-time All-Star catcher Jonathan Lucroy (who owns a very friendly $5.25 million team option in 2017) should further replenish Milwaukee’s young ranks. As far as timelines go, the Brewers (like the Reds), have to deal with three other player development machines (Cardinals, Cubs, Pirates) in the ruthless NL Central, which pushes back their window. A winning record by 2018 is plausible, but more likely in 2019.

The Reds officially waved the white flag on the near future when they shipped ace starter Johnny Cueto to the Kansas City Royals on July 26, 2015.

Four days after sending Cueto to the eventual World Series champions, the Reds traded longtime starter Mike Leake to the Giants. In mid-December, the Reds moved All-Star third baseman and 2015 Home Run Derby victor Todd Frazier to the White Sox in a three-team deal with the Dodgers. And days before the New Year, Cincinnati sent closer Aroldis Chapman to the Yankees.

The Reds received a trio left-handed starters in return for Cueto; all three (Brandon Finnegan, Cody Reed, John Lamb) are presently stationed in the Reds’ rotation. In exchange for Leake, Cincinnati took in outfielder Adam Duvall and pitcher Keury Mella. Mella, one of the Giants’ top prospects, was thought to be the prime piece in the deal, but Duvall surprised everyone in 2016 by being named to the National League All-Star team after hitting 23 home runs and ranking among the game’s leaders in raw power. The Reds received four prospects in return for Chapman and three more for Frazier.

Cincinnati has recently made a significant impact in the amateur ranks, as it had three selections among the first 43 picks in the 2016 domestic draft. The notable selection was third baseman Nick Senzel—allegedly the top college hitter available—with the second overall pick. The Reds also recently lavished a $7-million bonus on 22-year-old Cuban shortstop Alfredo Rodriguez.

Over the past year, the Reds infused a heavy dose of young pitching onto the major-league roster. Reed, a consensus top-100 prospect who has five MLB starts under his belt, is the latest addition, and is a near-certainty to stick in the rotation long-term. (The same can’t be said for Finnegan and Lamb.)

Further bolstering of the Reds’ system (No. 12 in Baseball America’s rankings) will come via an imminent trade of longtime right fielder Jay Bruce and should net the Reds at least one meaningful prospect in return. The market for shortstop Zack Cozart, who is enjoying a fine 2016 campaign, appears to be shallow at the moment, but the soon-to-be 31-year-old is under team control through the 2017 season, so Cincinnati could wait until the offseason to trade him.

By 2018, the Reds should have enough arms—Triple-A starters Amir Garrett and Robert Stephenson, both top-100 prospects, are knocking on the door—for a high-powered rotation and a deep bullpen, but ultimately, the franchise’s return to relevancy will be determined by developing ample position-player talent to go along with the pitching.