→This New York Times food columnist has nearly 40 cookbooks under her belt, sparked a guacamole debate so fervent even President Obama had to chime in (Should peas go in guac? Mr. O says no.), and will speak May 10 at downtown’s Mercantile Library. 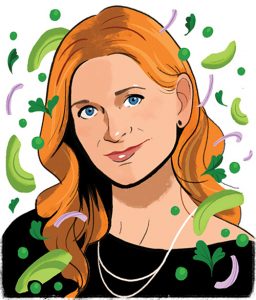 How did you land on food writing? Really I didn’t do anything else! I wanted to be a writer, so I was one of those people who always sort of freakishly knew what I wanted to do. I always knew I wanted to be a food writer, and I went to graduate school in writing, specifically in nonfiction. This is before there were food bloggers, but I had read M.F.K. Fisher and was really inspired by the idea that food was a way to tell a story. It’s universal, it brings us all together, it’s something we all understand—and I just knew that I wanted to use it as a way to communicate.

Being self-taught, how did you pick up the technical skills? Food and writing were always my two loves. I never went to cooking school, but I did work in restaurants a little bit, but not a lot. I was lucky enough to grow up with both parents who cooked. My dad and my mom cooked different things, so I learned from both of them. And food was also something that was very big in our family. We would eat one meal and, the second we were done with that meal, we’d be talking about what we were eating for the next meal.

So they both cooked, and the center of our house was our kitchen. It was where we all hung out. We were there all the time. We even had a TV in our kitchen. So cooking was always happening, and I was always learning. So I picked up the basics that way.

Then I worked in a little restaurant in Brooklyn that’s now gone, called Peter’s, an ice cream/café/bakery, and I learned a lot on the sweeter side there. And then I also worked in a few other restaurants, but it was something that, while I was doing it, I was always paying attention to what I was doing.

I was reading a lot. I feel like I learned as much from Madhur Jaffrey and Elizabeth David, the classic food writers, and cooking and paying very close attention to what I was doing. When I started food writing, one of my first big breaks was being able to write a cookbook, ghostwriting for Sylvia Woods—she owns a soul food restaurant up in Harlem that’s an institution. A friend of mine knew Sylvia and asked me if I would do it. So I was not only getting her voice—I was working with Sylvia on the words of her cookbook—I was also working on her recipes.

It became this very intense career for me ghostwriting cookbooks for chefs, and that was the best way to learn about food because it was like getting private tutorials with all these amazing chefs. So I was learning about how to make amazing soul food from Sylvia, and then I worked for Daniel Boulud and David Bouley, learned about French cooking, and I worked with Faith Ford on a cookbook.

You learned from the masters. Exactly.

What do you plan to talk about at the Mercantile Library in May? I hope that we talk about the way food can bring us together, because it’s universal and something we can all relate to. Also, I wrote a couple of cookbooks recently. One of them is Dinner: Changing the Game, and it’s about redefining the way that we cook dinner as a nation. And I hope we talk a little bit about how this country has learned—how we’ve gone so far away from the sort of 1950s standard of what dinner is supposed to look like. You know, the sort of protein-and-two-sides version. That’s kind of been the iconic American dinner on the plate since the 1920s, and I feel like people still kind of think that’s what dinner’s supposed to look like, but I don’t think that’s how many of us actually want to eat. My cookbook gives us a roadmap for a better, more interesting way to eat.

I also recently wrote an Instant Pot cookbook. I am in love with the Instant Pot. It’s absolutely one of the best new cooking appliances since the toaster, frankly. I like it so much better than the slow cooker. I’m not into the slow cooker. And so I hope we talk about that, too. It’s about revolutionizing the way we cook, and it’s a really fun, new, exciting development.

It seems like not only are people cooking more at home, but they’re also more passionate about using fresh ingredients. Are you finding that to be the case? I do find that there is this huge undercurrent—well, really it’s become a mainstream thing that’s growing—of people who actually want to learn how to use fresh ingredients all the time. How can we do that without opening a jar? A lot of it is just learning how to cope with the actual ingredients. It’s like, wait, how do we wash spinach? Something as basic as that. You can even buy washed spinach, so OK, great, seek out something that’s a little bit easier. I hope that’s the trend. I would love that to be the trend.

Do you think there was a turning point when it became more popular for people to care about cooking for their families instead of just picking up something pre-made? I think that’s still the fight we’re fighting, for sure. That’s definitely the discussion we’re having. I think organic plays a big part in it. I think people are worried about their health and their families’ health, so I think cooking for yourself and using fresh ingredients is definitely the safer way to go.

People understand that when you buy something, you don’t know what’s in it. It’s a little bit sinister, because we no longer, as a culture, look at corporate food as a benign thing—it’s a scary thing. They’re putting stuff in our food, and everyone is looking at the ingredients and taking a more active role in the health and feeding of their families, which I think is incredibly important.

How can home cooks step up their game without professional instruction? Try one new thing a week. Don’t get stuck in a rut. Try something new, even if it’s just something like … a celery root or a parsnip, something you’ve never made before. Just take it home and figure out what to do with it. There’s an internet out there that’s going to tell you what to do with [any ingredient]. When you go to the store, every once in a while buy something you’ve never bought before and take it home and play. And just find the joy in that discovery. Maybe you’re going to find something amazing. Parsnips are amazing, and not everybody cooks with them on a regular basis because they’re just not a popular food item like butternut squash.

Constantly be trying new recipes. Look for new places to find recipes. If you always go to Epicurious, maybe go to NYT Cooking or maybe even go to [sites from] the U.K., see what they’re doing in other countries. Pictures are great because, even if you don’t know exactly understand what the dish is, you can become inspired by looking at other people’s pictures. Follow a new cook on Instagram.

If there’s one unsung pantry hero, what is it? I’m all about anchovies. There are a lot of people in the world who disagree with me, but I think everyone should use anchovies a lot more than we’re using them. First of all, adding an anchovy into the pan just adds so much flavor—and not just for fishy dishes. I remember the first time I had anchovies with lamb chops. You’re not going to think an anchovy has anything to say to a lamp chop, when in fact they are best friends. They get along great. You just have to let them get acquainted.

In terms of the more international pantry, I’m a big fan of different kinds of chiles. We think of chile, like chile powder, as just an ingredient like cayenne that makes things hot. But there is a world of flavors in different chile powders. Some are just hot. Some are hot and fruity. Some are hot and smoky. Some are both hot and sweet at the same time. So I would love people to discover more interesting kinds of chile powders. One of my personal favorites is a Turkish chile called Urfa. It’s dark and a little smoky, and the flesh almost tastes like chile combined with dried apricots.

What are you most looking forward to about your visit to Cincinnati? I hear you guys have a very dynamic food scene, so I’m very excited to try the different restaurants. I only have two days, so I’m going to have to eat a lot of meals. Certainly Cincinnati chili is on the list, but so are some of the more contemporary, exciting restaurants like Salazar. And also I’m looking forward to walking around—I hear it’s an absolutely gorgeous city. I want to look at the architecture. I want to look at the bridges. I want to see the river. I want to go to OTR.

You introduced the deep-fried Twinkie in 2002. What’s the wackiest food craze you’ve seen lately? By the way, that’s one of my proudest moments reporting on that story.

Also because Obama? Because Obama! I know! Actually, it’s funny, because you know how Obama tweeted that guacamole should never have peas but should have garlic? But garlic is not at all traditional in guacamole, so that’s my own little personal thing; and my husband loves guacamole, so we have this thing where he goes, “Well, Obama’s on my side.”

What am I seeing now that’s crazy? A lot of purple food. Have you noticed this thing about purple food?

I’m seeing a lot more fast-casual. You know, making hot dogs, hamburgers, and French fries a lot better than they’ve ever been. And I am all for that. I think that’s awesome. Again, using real ingredients. Why can’t you make a hot dog that doesn’t use incredibly scary things?

And it just seems so American, doesn’t it? Yep. There’s nothing bad about that, as long as you’re using real ingredients.

Are there any dishes you’re seeing gain popularity in New York that you think will soon break through nationally? I feel like you have everything! If something starts in New York, it’s there for like five seconds before it takes off. I don’t think that stuff travels slowly anymore. And I don’t know if New York is necessarily the place everyone is looking. Don’t you feel like everyone is looking at Scandinavia to see what weird thing is popular?

The world is much smaller now. Exactly, so I don’t know if we have anything particularly “of the moment.” I mean, I think we’re going back to elevated comfort food, but I think that happens every January.

I think classic French is going to make a comeback. I think unstable politics means people want a sure thing, so I think that’s where classic French comes in. Is that what you’re seeing in Cincinnati?

Well, ramen is definitely having a moment here right now. So right, with Japanese, there’s sushi and there’s ramen, but I think we’re going to get more regional in terms of ingredients and preparation. But God knows I do love ramen.