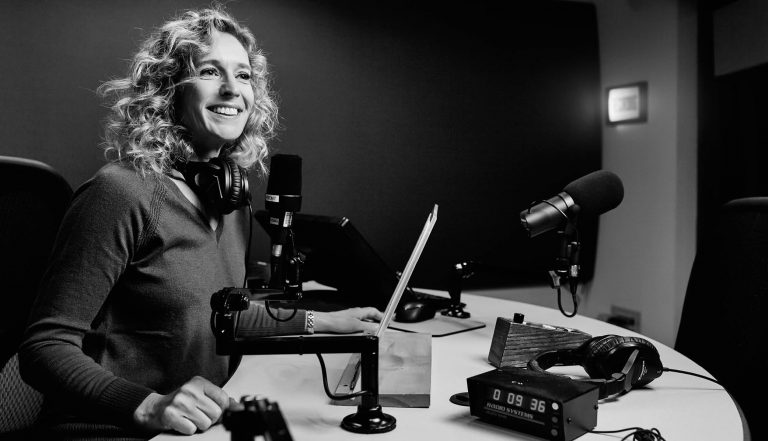 Suzanne Bona’s voice is tailor-made for the airwaves. Lilting and melodic, resonant and perfectly enunciated, authoritative and accessible, just the right blend for the woman who serves up early classical music to the multitudes each week on her syndicated public radio show, Sunday Baroque. And we do mean multitudes. What began in 1987 as a 90-minute spot in Fairfield, Connecticut, is now a weekly four-hour show recorded at WGUC’s downtown studios and broadcast over 166 stations around the globe. As Sunday Baroque has evolved and matured, so has its host, a trained flutist who set out post-college to be a symphonic musician but instead stumbled into a job as an underwriting director at a New England radio station. It was there that she—and her audience—discovered that voice, an instrument she wields with every bit as much talent as the flute she’s played since childhood.

Bona came to Cincinnati in 1996 to become music director at WGUC. At the time she seemed almost bereft, having left behind fresh East Coast seafood, a network of fellow freelance musicians, and the classical radio show that she had nurtured from infancy. Fast-forward 18 years: She’s happily ensconced in the Cincinnati musical community, long ago found a good source for seafood (Lobsta Bakes of Maine in Newtown, run by a fellow New England expat), and has built Sunday Baroque into a thriving radio franchise. After a long and fruitful partnership with National Public Radio, Bona decoupled from the NPR mothership in 2005 to produce and distribute the show independently. It’s a path that other public radio programs have begun to follow (hello, This American Life!), but Bona was ahead of the curve. On the eve of the 10th anniversary of Sunday Baroque going independent, she reflects on her life in radio, her love of music, and her slow absorption into the city she’s called home for almost two decades.

Tell me about your decision 10 years ago to go independent. How unusual was it? Were you that much of a pioneer?
It seemed so logical at the time, it didn’t even dawn on me: Are we blazing a trail?

If you were paying attention to the technology and to what networks were doing, it only made sense. The network’s role was to distribute the program, but things had migrated to being all digital and hard-drive-based. Stations could just go into a storage system and download the programs they wanted. So the network became essentially a middleman. I don’t mean that in a pejorative sense. I have tremendous respect for NPR and my colleagues there. We never could have launched Sunday Baroque on our own; we needed the credibility that the network gave us. But this seemed like such a natural transition, it almost surprises me that it’s taken some of these other shows so long to realize, “Gee, we can do it this way.”

The other thing was that the network was moving away from being in the business of cultural programming. So when we said that we wanted to continue to produce and distribute the show ourselves, they said, “God bless you, go ahead!” We were very fortunate to have an amicable parting and we’ve grown tremendously since then.

What do you attribute the growth to?
My show has always tracked a little younger than the broad classical music format. I like to think that part of that is my delivery, but there’s also something about the genre. Baroque music—melodically, harmonically, structurally—is very similar to the music familiar to most people, essentially pop music. There’s a certain symmetry to it. I hate to use the word “predictability” because it sounds negative, but you kind of know where it’s going. It’s like reading a wonderful book that ties up all of the questions and leaves you feeling satisfied.

It’s interesting to hear you liken it to pop music. I’ve always felt that’s something you try to do: make highbrow music more accessible to non-musicians like me. Do you see that as part of your role?
Definitely. Probably one of the most common comments I get from listeners is, “I really don’t know anything about music, but I like your show.” And it makes me laugh, because I think about sports fanatics who are couch potatoes yet have no qualms about commenting on strategy even though they may not have the ability to play the sport. Or a meal: We’re happy to go out for a wonderful meal and say, “That was delicious” or “That was lacking” without necessarily having the ability to prepare that meal. So I think there’s something about classical music that people feel intimidated about. Somehow along the way our culture has told us that we’re not allowed to have an opinion if we don’t know a lot about it.

I look at it much more as a sensory thing. If you hear music and you like it, what else do you really need to know? It’s nice if I can fill in some of the details or give you some tidbits that are interesting or make you connect with it more; I do see that as my job. But I also think that if you turn it on and feel like, “Wow, that helps me de-stress” or “That’s so pretty, I want to hum along”—that, to me, is enough.

At one time you wanted to be a full-time performer—that’s what you were trained for. So how did you end up in radio?
It was really a happy accident. A college classmate saw that WSHU [in Fairfield, Connecticut] was looking for a variety of positions, so I sent in my résumé, and they took a chance on me. I had literally never set foot in a radio station before. I was 24 years old and happy to learn the nuts and bolts—how to thread the reel-to-reel, how to work the board, how to talk on the radio and connect with people. And it was like crack cocaine—I immediately fell in love with it. I think that’s the performer in me.

Did that satisfy your inner performer, or was it hard to give up the idea of being a symphonic musician?
By that point there was a little tarnish on that dream. I realized how difficult that kind of life is. It’s really competitive, especially for a wind player. But I had been playing freelance in addition to working at the station, so I never really had to trade off. I was subbing in orchestras all over Connecticut and New York. And when I came to Cincinnati, I just assumed I’d be able to pick up and find a few musicians who wanted to play for fun, because that’s always been important to me. But I found it really difficult to break in, and to this day I don’t really know why. For the first few years I actually had more gigs going back up to Connecticut than I had here, which is to say I had none. Even freebies. It made the transition really hard for me.

But now you play a lot—the Seven Hills Sinfonietta [a community orchestra], private and community events, benefits. How did that open up to you?
It was another happy accident. My neighbor introduced me to a pianist, Marjorie Fryxell, who was very friendly but reserved—which I understand. When someone says, “You should meet my friend, she plays the flute,” you don’t know if she played in high school and hasn’t picked it up since. But shortly after, Marjorie met a wonderful oboist in Vermont, and when he found out she lived in Cincinnati, he asked if she knew me. And when Marjorie said yes, he asked her, “Isn’t she a terrific flute player?” And Marjorie said, “I don’t know, is she?” It turns out that oboist and I used to play in a quintet together.

Once that happened, the floodgates opened. Marjorie started taking me to these ladies’ music clubs, which are such a Cincinnati institution! They have a long tradition of getting together once a month to play music for one another and have lunch and socialize. Louise Nippert was in one of them. And then things just snowballed. As soon as I made that one contact, everything blossomed. My performing has really reignited, which is lovely.

You perform, you’re host and executive producer of Sunday Baroque, you’re a part-time announcer and producer at WGUC—you wear a lot of hats. Is there more?
I do a lot of marketing of the show, even though I have a person who does the nitty-gritty marketing and station relations. Everything I do publicly, even if it’s playing a concert, is all cultivation of the show. I’ve also produced a couple of custom CDs for Sunday Baroque stations to give as thank-you gifts to their supporters. Public radio is famous—or infamous—for giving away endless tote bags and coffee mugs, and it occurred to me that what these people really love is the music. So I hand-picked some wonderfully talented musicians and put their performances in the hands of listeners. I’m really proud of those.

Speaking of talented musicians, you’ve had your fair share of star encounters. Do any moments like that stand out for you?
The first time I met Yo-Yo Ma was really cool. He played a concert at the NPR studio, and it was right around when he started his Silk Road Ensemble project, where he brought together musicians from different cultures whose only shared language sometimes was music. And I told him that I loved that he wasn’t just one of the finest living classical musicians but that he was really an ambassador. And he just kind of looked down, almost embarrassed, and said, “I’m just a cellist.” And from what I know about him, it wasn’t an act.

Another one of those moments was when Sandra Rivers and I kicked off the Play Me, I’m Yours installation [in which pianos were placed in public spaces for anyone to play, in celebration of the 40th, 50th, and 60th anniversaries of WVXU, WGUC, and WMUB respectively] at Fountain Square a few years ago. She’s a phenomenal pianist, a CCM professor, and I’ve played her music on the radio for years. She’s something of an iconic musician to me. And to not just meet her but to have the opportunity to play with her was amazing. It was also ridiculous, because it was an August day, 95 degrees and humid. A very Cincinnati-centric moment.