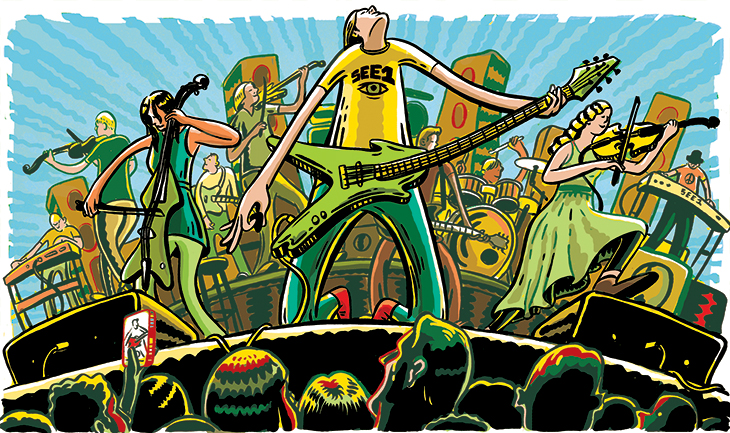 “ ‘Back in Black,’ please,” he says. And the Sycamore Electric Ensemble—also known as the Sycamore rock orchestra—roars away with an amplified sound of which AC/DC would surely approve. The cello and violin players stand straight and use harnesses and straps to wear, rather than hold, their instruments. The instrument models have names suited for roaring race cars: Viper, Stingray, Cobra. It fits the sound. At their February 21 concert, the six string players will use specially designed, futuristic versions of cello, violin, and viola to perform Foo Fighters’ “Everlong,” Imagine Dragons’ “Radioactive,” Coldplay’s “Every Teardrop Is a Waterfall,” and more. They’ll share the stage with a drummer and electric guitarist, bassist, and keyboard player.

To the uninitiated, it can seem cacophonous—instruments blaring away at a volume that would make the Jell-O cubes in the cafeteria shake. But once the kids get the timing right and make room for melodies and solos, it’s exciting. And, though the sound comes from the amplifiers, you can hear the individual string instruments.

This is the 11th year that Smarelli has presented such a concert. (Ticket information at sbob.org.) He allows the kids to spontaneously express themselves if it feels right—knee slides and amp-jumping have been known to occur. While his is probably the region’s first rock orchestra, it has company from newer and somewhat differently structured groups at other public high schools. At Sycamore, it isn’t about rock and roll replacing classical as the standard orchestral repertoire—the strings players are also members of the traditional 68-member orchestra. Rather, it’s about motivating kids to get interested in strings by letting them play what they already know and love.

“Rock’s been around a long time. It’s taken the string world a while to catch on,” Smarelli says. “That’s the good thing about all this. Maybe a kid will want to stick with the instrument after school and play that kind of music just for fun. Not everyone is going to be able to be in a symphony, or wants to be, but maybe they can play a tune they hear on the radio.”

There is a countervailing opinion as well—that rock and roll can save orchestras. Mark Wood, the chief proponent of electrifying high-school strings, sees it as an emancipating force. “It’s not only good, but essential,” he says. “Its about empowering kids in a 21st century way.”

An electric violinist and founding member of the Trans-Siberian Orchestra who is now a headlining soloist on his own, Wood runs a New York–based company that designs electric cellos, violins, and violas. The nation’s first high school rock orchestra, at Lakewood High School outside of Cleveland, started after orchestra director Beth Hankins and her students saw him and Trans-Siberian perform at the Rock and Roll Hall of Fame.

Sycamore’s rock orchestra uses Wood’s instruments, which can cost thousands of dollars. Clearly, he sees that as a wise investment. But to Wood it’s imperative for classical orchestras to innovate. “The reason orchestras are dying in front of our eyes like a dinosaur is there’s not enough creativity,” he says. “Symphony orchestras will be relegated—unfortunately in my opinion—to a museum where you’re protected and you’re there to keep that music of hundreds of years ago relatively alive. [But] that doesn’t breed the next Beethoven or Mozart. It breeds cobwebs.”

High school rock orchestras are still largely a novelty—Wood estimates there are 40 to 50 of them nationwide. But Ohio is clearly a hotbed. In addition to Sycamore, for instance, Hamilton High School’s Live Wire will join with the middle school’s String Fusion rock orchestra for a concert on March 7. And Oak Hills High School’s Highlander Electric Rock Orchestra, under Maria Palassis’s leadership since 2006, had its showcase concert in October.

With a growing number of schools plugging in, how long before there is a citywide battle of the rock orchestras? And where would it be held? A club or concert hall? With rock orchestras, those distinctions may not matter so much. It’s more about the pleasure of playing strings. And cranking it up.