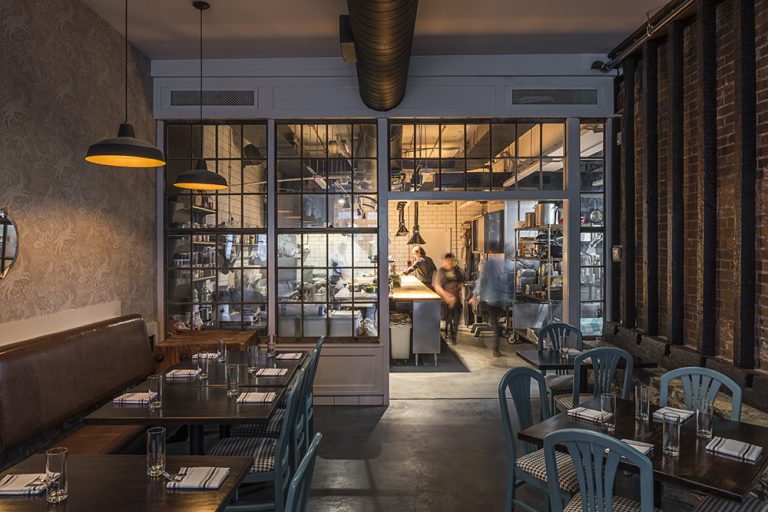 Covington’s Commonwealth Bistro bills itself as “historically inspired, locally sourced.” The menu has its roots in vintage Appalachian cookbooks that chef and owner Chris Burns found in online archives. Everything from the old jukebox by the entrance to the sepia-toned rabbit-and-pheasant wallpaper exudes an appreciation for the antique. Unusual regional ingredients dot the dinner menu and the cocktails—spicebush berries, bitters made from pawpaws, sumac. Still, the menu is not a museum. Happily, it includes plenty of global influences.

In one meal, we enjoyed a French-inspired torchon, a Somalian sauce, and some subtle Korean touches. Rather than duplicating old recipes, Commonwealth has used the history of regional cooking as a springboard to create something elegant and original, without sacrificing what makes home-style cooking so satisfying.

Burns and Commonwealth general manager Bryan Harris both worked with Jean-Robert de Cavel at JeanRo Bistro, and Burns describes this restaurant as a marriage between the Kentucky locale and his “life experiences in the industry.” The restaurant took five and half years from inception to opening, with much of the work going to turn two 150-year-old buildings into a functioning restaurant. (Burns laid the upstairs deck himself over several sweltering days one July.)

Not everything at Commonwealth is a runaway success—there are definitely some hiccups in the service—but two distinct dishes get at what makes this place special: biscuits and fried rabbit. Anyone dealing in elevated regional cuisine had better be able to nail the staples, and Commonwealth delivers. Their biscuit is perfection—moist and flaky, without being coat-your-throat buttery or crumble-to-ash dry. The rabbit is crisp, light, and not at all greasy, with just the right touch of seasoning.

The next challenge, especially for a restaurant charging premium prices, is taking familiar flavors into more interesting territory. Again, in both of these dishes, Burns delivers. The biscuits come with a tart quince butter, and the fried rabbit is served with biz baz sauce, a cilantro and garlic sauce of Somali origin that tastes like a creamy salsa verde.

The regional inspiration is especially evident in the extensive bourbon list and the Ohio and Kentucky farms that supply its meat and produce. I was much more excited to explore the local beer and cocktails than the wine list, which featured the usual bottles from France, Italy, and America’s west coast—somehow, they didn’t feel like the thing to accompany a meal at a place called Commonwealth. The bourbon list, by comparison, is much more interesting, with more than two dozen offerings, including such standouts as Angel’s Envy (finished in port barrels), and Booker’s, which is bottled straight without being cut or filtered. I would rather have a highball made with Ale-8-One, or bourbon with a spicebush dram, when sitting down to a meal of, say, Owensboro smoked beef brisket.

Dessert, from pastry chef Amanda Bowman, again takes down-home flavors and refines them. The honey pie defies cloying with a dollop of delicately tart buttermilk ice cream, and the whole thing melts into a deliciously satisfying mess. Her smoked flan had an intriguing combination of ingredients, including kumquat and carrot dulce de leche, but the more delicate flavors were lost in the overpowering smoke.

A few of the entrées suffered from the opposite problem—the flavors were too subtle. The bright green broth alongside the bass promised vivid, herbaceous flavors it never delivered. Unlike most of what we ate, it was forgettable and has, in fact, already been replaced with an Acadian redfish with smoked shrimp perloo. Burns is at his best when working with a vivid flavor palette suited to Southern home-style cooking. The recent menu changes would seem to support this.

On a logistical note, the dining room at Commonwealth is quite small. How small? You can look up and watch your meal being prepared. With room for about 50 people, some problems become apparent when the place fills up. We stopped in one Sunday for brunch when the restaurant was full. Service was friendly but scattered. Like us, a nearby table ordered burgers. When the dishes emerged from the kitchen, the servers weren’t sure who was getting what. Burgers were served at the neighboring table and then taken away. Eventually, mine arrived, but it was extremely rare—no one had asked me how I wanted it cooked.

This $16 burger (ouch) was the most obvious miss. Other items on the brunch menu were much better, like my wife’s salsa verde pork with pickled jalapeño grits made creamy with the yolk of a 75-degree egg. And all was forgiven when I tasted their Bloody Mary, which was smoky, spicy, not too salty, and served with delicious pickled giardiniera on top.

So yes, there are still a few kinks in service to work out, but I am willing to let them go, because Commonwealth possesses something increasingly rare in our restaurant landscape: a real identity. In all of its best dishes and drinks, there is an obvious vision—love of the past paired with an adventurous spirit bent on innovation. As in those old cookbooks, there are plenty of discoveries to be made.

The Takeaway
Mining history for inspiration, Commonwealth stakes out prime territory in the current dining scene. Plus: They make an outstanding Bloody Mary.