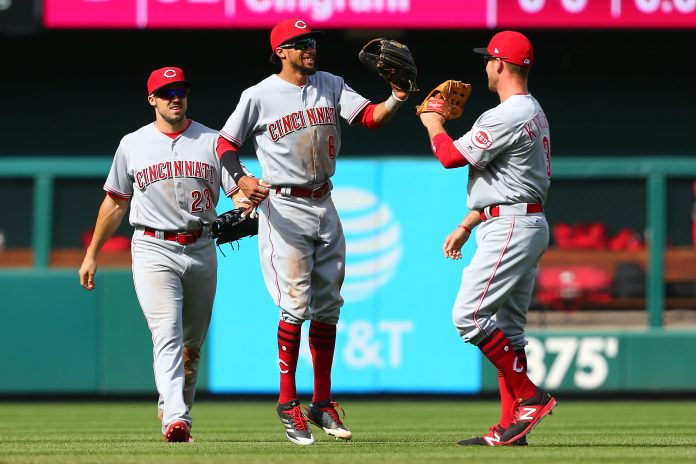 Though for some of you, that should probably read: baseball is back (no exclamation point). I get it. The Cincinnati Reds have lost 192 games the last two years, a boatload of bad baseball.

But hope springs eternal. With the Reds off to a hot start to the 2017 season—two shutouts in a weekend series in St. Louis? Be still my beating heart—I’ve noticed what seems to be a little more optimism among the Reds faithful. And why shouldn’t there be more optimism? Things are looking up for the ol’ Redlegs, right?

Anyway, that’s my story and I’m sticking to it. I’m excited about the 2017 version of the Reds. Here are ten reasons why.

1. The Reds will win more games than they did last year.
This is my personal guarantee to you. The Reds will show real improvement this season, after two years at the bottom of the National League Central division.

As spring training kicked off, I really believed that the Reds were destined to play .500 baseball this season. It just looked to me like the team had improved in enough areas that a substantial overall progression was almost guaranteed. Perhaps 81 wins is a little optimistic, but I didn’t think it was outside the realm of possibility at all.

That was before Homer Bailey and Anthony DeSclafani got hurt again. Which changes the calculus a little, but I still see no reason why the Reds couldn’t catch lightning in a bottle and be competitive—more competitive, at least—in 2017. (I have conveniently included my reasons for thinking the Reds will be substantially better below, for your digital reading pleasure.)

Of course, you might say, the Reds can’t be any worse than they’ve been the last two years! To that, I say: Good point. But if I’m correct, and the Reds have hit rock-bottom and are destined to begin the upswing right now—or if, as is possible, that improvement began with Cincinnati’s performance in the second half of last season—then things are about to get exciting—more exciting, at least—around here.

2. All these kids!
The Reds have spent the last couple of years unloading some of our favorite players, much to everyone’s consternation. Those trades weren’t just about opening up money in the budget; the Reds were able to restock the farm system and use some of the freed-up cash to invest in the international market.

Finally, 2017 is going to be the season when Reds fans are going to be able to see tangible evidence of what the front office has been up to during this rebuild.

Look at the opening week starting lineup. Jose Peraza, Billy Hamilton, Eugenio Suarez, Tucker Barnhart, Scott Schebler—all 26 years of age or younger. Three of those were acquired by trading veterans away, and the other two were drafted by the Reds. All have a chance of contributing to the “next good Reds team.”

It gets even more exciting when you look at the pitching staff. Behold the pitchers on the Opening Day staff who are 26 and under: Brandon Finnegan, Michael Lorenzen, Amir Garrett, Rookie Davis, Cody Reed, Robert Stephenson. That’s the core of what could be a very good pitching staff over the next few years.

There will be some struggles for this group, as they adjust to the big leagues. There will be nights when they look lost, either at the plate or on the mound. But there will also be nights—like Garrett’s astounding big league debut last week—when these kids will amaze and delight, and give us a glimpse of the future.

3. More kids are on their way!
One thing I’m most excited about is the prospects who are just on the cusp of making it to the big leagues. A number of interesting guys have a shot at making their major league debut in 2017. Jesse Winker has been hovering near the top of prospect lists for the last couple of years, and he’ll almost certainly wear a Reds uniform at some point this season (probably sooner rather than later). Winker may even be in the Cincinnati starting lineup by the time the season is over—and then hopefully he’ll remain in that lineup for many years to come.

Dilson Herrera—acquired in exchange for the ever-affable Jay Bruce—is a hitting machine. Optimistically, he’ll get healthy and work his way into the big league mix at some point this season as well. Although he won’t be making his official debut—Herrera came up originally with the Mets as a 20-year-old back in 2014—he’s one of the talented youngsters that have a chance to play in Cincinnati’s middle infield for years to come.

There are more! Pitcher Sal Romano has improved his stock within the organization over the last 18 months more than perhaps anyone in the system. So much so that Romano very nearly made the Reds’ Opening Day starting rotation. He’ll be here at some point.

And then there are third baseman Nick Senzel (last year’s first-round draft pick) and flamethrower Luis Castillo (acquired in the Dan Straily trade). I have hopes that both of those guys can sneak onto the big league roster this year, perhaps in September after rosters expand. Senzel’s development, in particular, is going to be key in determining just how close this club is to being a competitor for a playoff spot within the next couple years.

4. Raisel Iglesias.
Iglesias is healthy after a battle with his shower, and he’s better than ever. Seriously, if you haven’t paid much attention to him, don’t miss the opportunity this season. I say this with utmost sincerity:

There is no pitcher in the entire Reds organization, from MLB to Rookie ball, who has more talent than Raisel Iglesias. He’s a beast, and it’s going to be so much fun watching him baffle big league hitters with his array of pitches and arm angles.

5. The bullpen is good now.
One year ago, in the online pages of Cincinnati Magazine, I lamented the horrific state of the Reds bullpen. Let’s not revisit that, okay? Suffice to say that some analysts declared last year’s bullpen among the very worst in the history of the grand game of baseball.

This year, the bullpen could actually be an asset, if you can believe it. The Reds have three solid relievers that weren’t around during the early part of last year, when the bullpen lost game after game after game for the Redlegs. Cincinnati signed Drew Storen, a local kid who had some good years closing games for the Washington Nationals, and added him to a bullpen that now includes the aforementioned Iglesias and Lorenzen. Those last two in particular are shutdown relievers capable of pitching multiple innings.

Think about it like this: Tony Cingrani saved 17 games for the 2016 Reds, and he just might be the worst reliever in the current version of the bullpen! Cingrani is certainly not a bad pitcher; quite the opposite. He’s just surrounded by more bullpen talent than the Reds have had in a few years.

6. Billy Hamilton.
Billy Hamilton is a comic book superhero. He will be a National League All-Star in 2017. Count on it.

7. It may be Zack Cozart’s last go-round.
One of the first pieces I wrote for Cincinnati Magazine, back in 2014, was a defense of Zack Cozart. This is Cozart’s seventh season as a Red, and it may very well be his last. He wasn’t always the best hitter in town—though he has worked very hard to improve with the bat; unfortunately, injuries have obscured that a bit over the last two years—but he’s always had one of the best gloves in the league.

Cozart has been an integral part of some good Reds teams and, at the moment, he sits at ninth all-time for games played as a Cincinnati shortstop. He’s had a good career for this club. I don’t know whether he’ll be traded, and I think there’s a good case to be made that the Reds should keep him around, but rumors continue to swirl. On the chance that he is dealt, make sure to watch and appreciate Cozart one last time. I know I’ll enjoy watching him play shortstop for this club for as long as I’m able (especially if he continues hitting .450/.478/.700).

8. Devin Mesoraco.
Back in 2014, Devin Mesoraco was a National League All-Star, hitting 25 home runs and putting together a season at the plate that is better than any Reds catcher who isn’t named Johnny Bench or Ernie Lombardi. He was 26-years-old at the time, and looked ready to ascend into the stratosphere.

Mesoraco has accumulated just 95 at-bats in the two seasons since.

We all know about the injuries and the surgeries and constant setbacks. Well, it appears that Mesoraco really stands on the precipice of returning to the big leagues. He’s on a rehab stint in Double-A, and things seem to be progressing smoothly toward a return to Cincinnati in the very near future. It’ll be interesting to see what Mesoraco has left in the tank; if he can return to some semblance of the hitter he once was, the Reds will be in good shape indeed.

9. Joey Votto.
He’s the greatest hitter in the history of the Cincinnati Reds. (How’s that for a hot take?) You should cherish every single at-bat. Votto is a hitting genius, and we get to watch him play for the home team.

10. Dick Williams.
The Reds General Manager is fully in control of the Reds now, and the early returns are very positive, indeed. Williams has more of an analytical bent than any previous GM in Cincinnati, and he’s worked to strengthen the Reds’ organization top to bottom in a number of ways: player analytics, international scouting, minor league coaching, and nutrition.

Go read this interview and see if you aren’t a little excited about having Williams at the helm. “The Plan” may end up going awry, but for now, I’m going to trust the process.

You know, this is the first time since 2013 that I haven’t had this little feeling of dread in the pit of my stomach at the outset of baseball season. Certainly, I was always hopeful each spring, but we all kinda knew what we were getting ourselves into with the last two versions of this ballclub.

But now, the team is clearly on the upswing. There is a ton of fresh, young talent beginning to emerge, we still have one of baseball’s best hitters playing in the Queen City, and management finally appears to “get it.” The next few seasons could be a lot of fun for Reds fans. And maybe, just maybe, my friend Jason—who predicted that the Reds will finish in second place in 2017— will be proven correct.

Hop on board before this bandwagon gets too full.