Home News Religion The Ark Encounter, By The Numbers 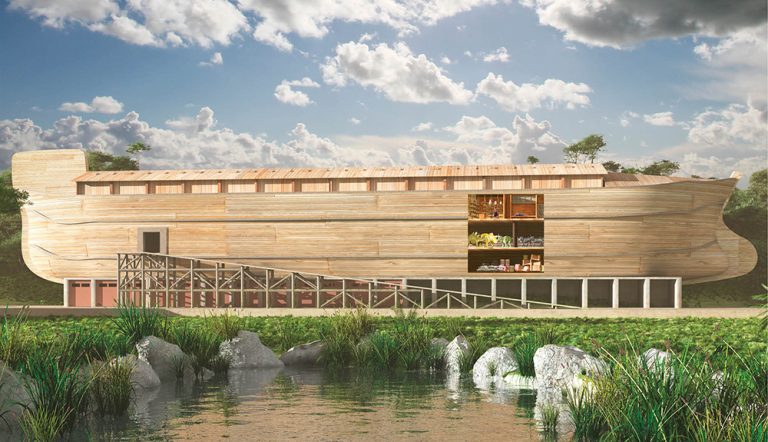 The Ark Encounter, the humongous rendering of what Noah’s big boat might have looked like, is many things: a colossal roadside attraction; a lightning rod for arguments about separation of church and state; a way for Answers in Genesis, the organization that also built the Creation Museum in nearby Petersburg, Kentucky, to communicate their literal reading of the Good Book. But it is one more thing, too: a business venture with a price tag of biblical proportions. Here’s a tally of some of the costs incurred in the creation of the Ark Encounter, which opened in Williamstown in July. We understand it’s a wonder to behold. As are the $8 hamburgers in the onsite restaurant.

$0: Amount employees will earn if they do not sign a “statement of faith” affirming their acceptance of Answers in Genesis’s vision of Christianity

$8: Cost of a jalapeño chipotle hamburger and a side dish at Emzara’s Kitchen

$40,000–$50,000: Research into how ancestors of various contemporary animals might have looked in antediluvian times

$57,000: High-end milling machine used to carve dinosaurs out of Styrofoam

$500,000: Cost of widening Route 36 near entrance to Ark Encounter, funded by Answers in Genesis

$3.2 million: Shuttle buses to ferry guests from parking lots to the ark

$10 million: Cost to state to revamp freeway interchange at I-75 and Kentucky Route 36

$62 million: Remaining debt, in the form of bonds held by Answers in Genesis supporters

$80 million over 20 years: State and local tax breaks given to Ark Encounter

$4 billion: Projected financial impact to region over next 10 years