Joey Votto is good at baseball. In fact, he is a marvel, already one of the best players in Cincinnati Reds history.

Votto also makes a lot of money. In 2012, he signed a 10-year contract extension worth $225 million that will tether him to the Reds through at least 2023. At the time, the deal was the largest ever for the franchise and fourth-largest in baseball history—and the only way to assure the 2010 National League MVP would remain in a Cincinnati uniform. But in the bleachers of Great American Ball Park, one question lingers: Is Joey Votto worth all that dough?

A current estimate by FiveThirtyEight.com calculates that each win above replacement (that is, the number of wins Votto is worth compared to a mediocre, replacement-level player, or WAR) equals $7.7 million. Since his extension began in 2014, Votto has been paid $46 million, meaning he needed to accumulate roughly 6 WAR over those three years to have “earned” his paycheck. In the 2015 season alone, Votto compiled 7.6 WAR according to Baseball-Reference.com. Even with a knee injury in 2014 and his slow start this year, according to the arcane number-crunching of moneyball obsessives, Votto has actually been underpaid so far.

The future is murkier. After 2016, the Reds will still owe Votto at least $179 million; he would need to average about 3.3 WAR per season through 2023 (just over 23 WAR total) to justify that amount of money. Can Votto do that? It’s not inconceivable—he’s a special player—but Father Time is a tough adversary.

However, it’s also worth remembering that because Votto has been underpaid thus far, and because player contracts will likely continue to rise, the long view of the contract looks more favorable. Paying a $25 million salary to an aging Votto will seem less ridiculous seven years from now. The Reds organization will likely look back on the career of one of the best players in franchise history and argue that, yes, Joey Votto was indeed worth all that money.

Whether the fans in the cheap seats will ultimately agree is a completely different matter.

.953 OPS*
Highest on-base plus slugging percentage (which indicates a player’s ability to reach base and hit for power) in Reds history

31st
Where Votto’s 2016 salary ranks among all MLB players 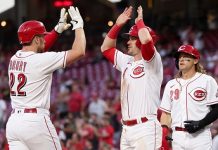 The Reds Find a Tiny Ray of Sunshine