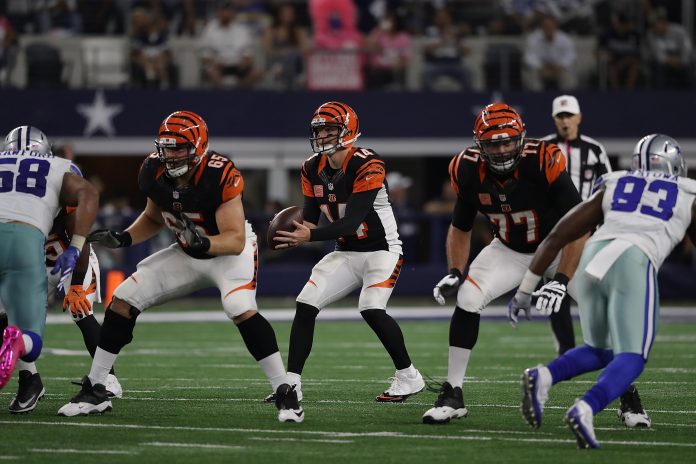 The Bengals played a nice game on Sunday, handling the Eagles of Philadelphia by a score of 32-14 for the team’s first victory since Oct. 23. Andy Dalton was sensational, completing at least two passes to eight different receivers and throwing for 332 yards and two scores while averaging nearly 11 yards per attempt. The non-A.J. Green skill players performed beautifully, with rookie Cody Core hauling in his first catch on a 50-yard bomb and Rex Burkhead showing spunk (save for a fumble) on 12 touches. And the defense, spurred by Vontaze Burfict’s manic greatness (15 tackles, two interceptions), limited the Eagles to seven points through three quarters.

While Sunday was arguably the Bengals first complete performance of the season, it’s also one that qualifies as too little, too late for a 4-7-1 squad that would require collapses by both the 7-5 Ravens and 7-5 Steelers to backdoor its way into the franchise’s sixth straight playoff berth. (Sorry to rain on your parade, Adam Jones.)

And yet, despite a rare instance of Good Vibrations for the 2016 Bengals, another major storyline to emerge from Sunday was the latest negative development in the melodrama that is the play of the team’s beleaguered offensive line.

For the first time all season, Dalton was not sacked and was hit just twice on the day, a surprisingly sterling showing for the maligned unit opposite an Eagles defensive front that ranked sixth in Football Outsiders’ adjusted sack rate entering the game. Cincinnati delivered this performance without normal starting right tackle Cedric Ogbuehi, who dressed for the game but did not play a single snap.

Why didn’t Ogbuehi see the field? Let us turn back time for a moment.

In the 2015 draft, the Bengals selected Ogbuehi in the first round and another tackle, Jake Fisher, in the second round despite the presence of longtime stalwart Andrew Whitworth at left tackle and 2009 first round pick Andre Smith on the opposite side. Ogbuehi missed much of his rookie season recovering from a knee injury, but public perception was that after Smith presumably left as a free agent last offseason—which turned out to be true when Smith departed for Minnesota—Ogbuehi would take over at right tackle. With Whitworth aging (he turns 35 in a week) and a free agent after the 2016 campaign, the Bengals would either elect to let Whitworth walk, or bring him back and move him to guard (his original position), thereby allowing either Fisher to play left tackle or for Ogbuehi to move to left tackle from right tackle and permit Fisher to start at right tackle.

Through the season’s initial five weeks, Ogbuehi played in 100 percent of the offense’s snaps, with his backup, well-traveled 33-year-old Eric Winston, seeing two snaps in Cincinnati’s blowout Week 4 win over the Dolphins and zero action in the other four weeks. But beginning in Week 6, the Bengals began siphoning Ogbuehi’s snaps and giving them to Winston, utilizing a rotation between the two. Why? Because through the team’s first five games, Ogbuehi had allowed more quarterback pressures than the rest of the Bengals offensive line put together.

The following table lists the percentage of the offensive snaps Ogbuehi and Winston saw from Week 6 through Week 12. (Note: the Bengals were off during Week 9.)

According to NFL.com, a poor showing in Week 10 vs. the Giants vaulted Ogbuehi to second place on the league’s sacks+pressures list, which in turn caused the Bengals to immediately slice the Texas A&M product’s snaps. Per Pro Football Focus, in Week 12 against the Ravens, Ogbuehi yielded two sacks and three hurries on 31 pass protection snaps, while Winston allowed two hurries in five fewer snaps.

Sunday, Ogbuehi rode the bench and Winston got the start, with Fisher taking Ogbuehi’s place in the rotation. Post-game, Marvin Lewis was his usual noncommittal self re: his coming plans for his offensive tackles.

“We are going to keep going forward and try to put the best guys out there that we can,” Lewis said. “We need to keep moving forward offensively in every area.”

In the short-term, Lewis’s new strategy is logical, even if it comes at the cost of Ogbuehi’s development. First, Lewis can’t allow his franchise quarterback to be battered game after game. (Dalton has been sacked 32 times this year, the fourth-highest total in the league.) Two, it would be difficult for Lewis to continually play Ogbuehi and justify it to his team, which is still—don’t laugh—mathematically alive for the postseason.

Long-term, it’s obviously not a good look for a journeyman like Winston—who has at best been playing marginally better than Ogbuehi—to poach playing time from a player that was hoped to be a bedrock of this franchise’s offensive line for the next half-decade. (The good folks at Cincy Jungle recently reminded us that Ogbuehi was far from a sure thing coming out of college. Eek.) It’s also fair to wonder why Fisher, who received 125 snaps along the line in 2015, hasn’t cracked the lineup ahead of Winston. And here’s another plot point to consider: Kevin Zeitler, a full-time starter at right guard for the Bengals since the franchise selected him in the first round of the 2012 draft, is a free agent after the season.

After losing one starter from 2015, Cincinnati’s once-formidable offensive line has cratered in 2016. It’s fair to wonder about the stability of the unit moving forward when it’s conceivable that both Whitworth and Zeitler won’t be around in 2017. With four games remaining in the regular season, how Lewis and his staff handle the complicated quandary that is Cincinnati’s offensive line will be most fascinating—win or lose.