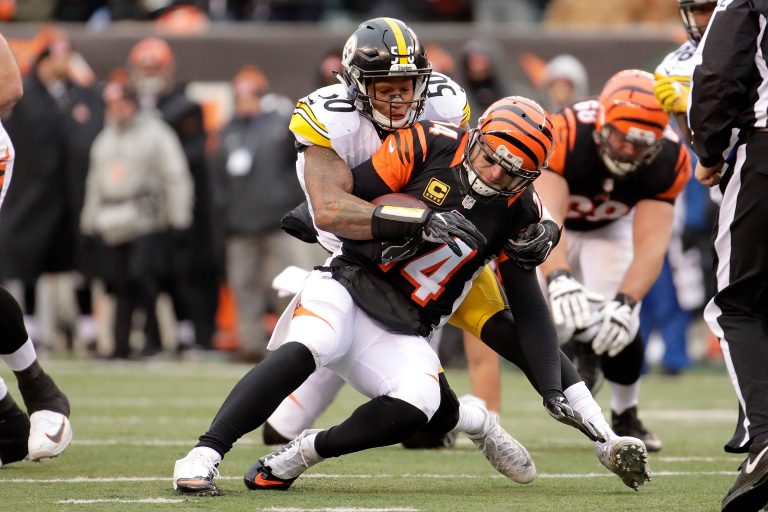 When the Bengals and Steelers kicked off at 1 p.m. on Sunday, the temperature in our fair city was 26 degrees. (And not just a passing, chilly 26 degrees, but a dayum-it’s-fricking-freezing 26 degrees.) The lone person unbothered by the chill may have been Steelers linebacker Ryan Shazier, who delivered a full dose of disrespect to Mother Nature by warming up shirtless.

A gaze into the distance beyond Paul Brown Stadium’s south end zone provided a somber portrait of what many winter afternoons look like in the Midwest. The Ohio River was seemingly still under the John A. Roebling Suspension Bridge, too numb to flow with its typical zest. Above the Northern Kentucky skyline was a bleak gray-blue sky, a funereal reminder that winter is here to stay, that prevalent sunshine and comfortable temperatures are many months away.

The ambiance foretold the Bengals impending doom by not only signaling the team’s latest second half cave-in, but also foreshadowing the extinction of Cincinnati’s slim postseason hopes.

For the first time since the T. Ocho Show—both the on-field pairing and the short-lived television series—Cincinnati’s professional football franchise will miss the playoffs.

Though the Ravens one-point victory over the Eagles was the actual nail in the coffin, the Bengals saw fit to light their own pants on fire in the second half when they racked up 33 more penalty yards (71) than offensive yards (38) on four post-intermission offensive possessions. Those four drives culminated in three punts and an interception, thereby staining the exquisite canvas (20 points on four non-end-of-half possessions) the offense had painted in quarters one and two. Paul Guenther’s rejuvenated defense had also held firm, limiting Ben Roethlisberger & Co. to a trio of field goals, none of which were gimmes as Chris Boswell hit from 45 yards once and 49 yards twice.

It’s difficult to discern if a team performs with more (buzz word alert) “fire” or “hunger” from one game to the next, but one does not require a psychology degree to recognize that Sunday was the Bengals de facto playoff game in 2016. Going toe-to-toe with division rival Pittsburgh is the first part of this equation, especially factoring in the two teams’ recent history—including January’s stunning unraveling by Cincinnati. There was also the Bengals’ ability to (possibly) prolong their feeble postseason hopes for another week with a victory while simultaneously cold-cocking the Steelers back into a first-place tie in the AFC North with the Ravens.

And to their credit, the Bengals delivered a resplendent first-half performance, playing with a controlled vigor. Yes, Jones was flagged for taunting and Jeremy Hill attempted to dismember a Terrible Towel after scoring a second-quarter touchdown, but the squads were seemingly on their best behavior.

“We expected them to jump out quick,” Steelers running back Le’Veon Bell said postgame. “We knew we’d have to chip it out and grind for the entire game.”

The writing was on the wall soon after the third quarter began. Pittsburgh converted a 3rd-and-17 on their initial second half drive and were aided by Burfict’s (dubious) first personal foul penalty of the season later in the possession. After two more Boswell field goals, Andy Dalton picked an inopportune time for his first gaffe of the day, a tailor-made interception to Lawrence Timmons that gave way to yet another Boswell field goal (he finished with six 3-pointers), providing the Steelers a lead they would not relinquish.

The Steelers scored on five of their final six drives, the lone exception a near-six minute sojourn that dissipated the clock. Pittsburgh is now 7-2 in its last nine outings vs. Cincinnati and 4-0 in its last four games in PBS, with its last defeat in the Queen City coming 1,189 days ago on Sept. 16, 2013. (The Bengals’ leading rusher that night? BenJarvus Green-Ellis. Yeah, it’s been awhile.)

As for the Bengals, they enter the “now what?” portion of the season, an unfamiliar feeling for a team that isn’t used to playing for just draft positioning with their remaining forays. Perhaps more young players will see additional snaps; second-year right tackle Jake Fisher garnered the first start of his career Sunday, and many of the team’s veterans could see their playing time cut.

Marvin Lewis submitted a rare moment of candor and insight in his postgame press conference—perhaps born out of his frustration with his squad falling to 1-6-1 vs. teams with winning records in 2016—not only criticizing a specific penalty call (a personal foul on defensive tackle Pat Sims) and specifically naming the referee (head linesman Phil McKinnely) involved, but also postulating that the “emotions” of the game got to McKinnely. Yet, the more interesting nugget from Lewis was the longtime head coach reiterating the lament he feels about not being able to reach this incarnation of the Bengals in the same way he has with previous squads.

“I feel like I’ve not found the right buttons to push to get us to where we need to be,” said Lewis, a sentiment that was similar to comments he recently made to The Cincinnati Enquirer a couple weeks ago. “It’s my job to figure out why we don’t get to where it needs to be. We’ve been short.”

Lewis and his staff will have more time than usual to mull over the future of their team, as the Bengals impressive streak of playoff berths (and equally impressive, albeit depressingly so, streak of first-round playoff losses) will end at five successive seasons. This guarantee had typically-jubilant defensive tackle Domata Peko (a Bengal since 2006) down in the dumps in the postgame locker room.

“It really hurts me—I don’t know how many years (I have left) and I’m going to be gone,” said the impending free agent. “I want to get a ring so bad before I’m done. We fell short this year.”

Surely, even in the face of all those playoff meltdowns, his sorrow toward missing out on the postseason entirely is shared by the organization and its fans.