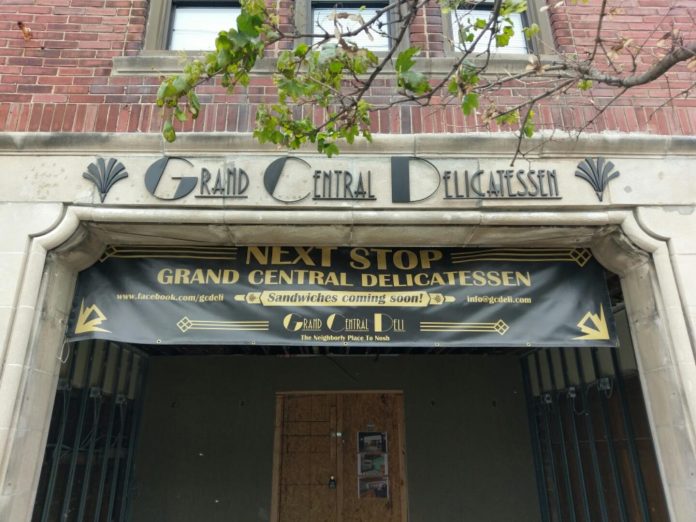 Your sandwich is almost ready. They’re sure of it this time.

Grand Central Delicatessen, the long-awaited New York-inspired deli coming to Pleasant Ridge, is finally nearing an open date. We wrote about the deli last winter, when it was hoping for an early 2016 grand opening. Countless LOLs and angry-face-emojis later, it appears early 2017 is looking far more promising.

Owners Sheelah Parker and Jeff Strong spent the past year auditing a full course-load on the mind-numbing delays and incessant annoyances that come with starting and renovating a new business. They lost some private funding early on, and then had to work with the city and contractors to make the requisite repairs and get the proper permits—which any business owner will tell you is not exactly a swift process, especially outside the OTR corridor.

Parker and Strong kept busy thanks to the catering side, slinging sandwiches and Strong’s crave-inducing guacamole at events such as Bunbury, MidPoint, Riverfest, and private parties. But as renovations and all-clears have picked up at the storefront, Parker is optimistic for a February opening. They’ve already passed the electrical inspection and are hard at work on subflooring and drywall. Most of the original business plan is still in place—including the deli, bistro, bar, and dog-friendly patio. They did have to tweak some layouts and lighting, and also plan to expand the initial menu to now include appetizers and desserts in addition to the regionally sourced charcuterie and deli options, with an eye toward more entrees down the road. They will still feature Sixteen Bricks bread and Boar’s Head meats, and there are rumblings O Pie O could have a presence as well. The deli has also commissioned a mural on the front patio by local artist Danny Babcock, who painted the vinyl-spinning mermaid on the side of Everybody’s Records for forthcoming Casa Figueroa.

Parker intends to open seven days a week for lunch and dinner, and will adjust hours based on what the early response is from customers. The deli also plans to stay open late on weekends for the hungry Overlook Lodge crowd, and hopes to eventually host theme nights, live music, and local artists. Community interaction is a big focus for Grand Central, which has already teamed up with the Cincinnati Pet Food Pantry and plans to give back to neighborhood schools and organizations in some way, potentially with food vouchers for local families. It’s a sentiment of support Parker and Strong have experienced themselves through this lengthy opening process.

“We still get emails and private messages just about every day,” says Parker. “It makes me happy that the neighborhood people still care.”