Home News History “Mummies of the World” Visits the CMC 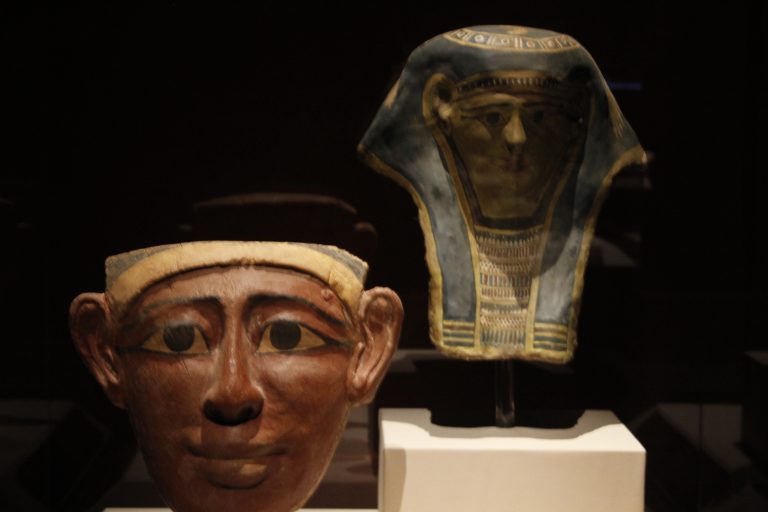 The Cincinnati Museum Center’s Mummies of the World is set up to showcase everything from the very first modern-day Egyptian-style mummy to mummified cats to shrunken heads. “I want people to understand that there is more to mummification than the Egyptian, bandage-wrapped mummies,” Dr. Heather Gill-Frerking, curator of the exhibit, said. “I want them to see the range of natural and artificial mummification that exists in the world.”

Click through to see images from Mummies of the World:

The exhibit begins with a short movie and then opens up to the artifacts, starting with one of Gill-Frerking’s favorites: a baron and baroness who were found in a family crypt in Southern Germany. The couple is a perfect example of how science tells the larger story behind the mummies. “Every mummy has its own little quirk,” Gill-Frerking said, “but from analyses we have done on these bodies we know the woman had a very severe spinal twist, scoliosis— probably from malnutrition—and it must have made it very difficult for her to walk.” That tells Gill-Frerking that the couple wasn’t leading a very healthy life despite being fairly high status individuals.

The exhibit also features another couple and their daughter. According to Marcus Corwin, president of American Exhibitions, Inc., the mummies make up the only such family in the world travelling as a part of an exhibit. The family is also unique because they are from the 18th century and so each member’s age and name—biographical information often lost to the ages—was recovered from church records.

Then there are the beloved Egyptian, bandage-wrapped mummies, which can actually pose a bit of a challenge, according to Gill-Frerking. She said besides the usual temperature and humidity monitoring that is done on each exhibit item, moving sarcophagi is tricky because they are “very, very heavy.” So heavy, in fact, that organizers have to transport each piece separately.

Other artifacts are scattered throughout exhibit as well, to help tell the story of the mummies’ surroundings.

So far, more than 1.2 million people nationwide have seen the traveling exhibit. “Cincinnati has a great cultural history to it,” Gill-Frerking said. “I think people here appreciate some of the really amazing things that go on in the world. It seemed a very natural place to bring the exhibit.”