Home Culture Books You Can Bank on Books

What do you need to know about Cincinnati Poet Laureate Yalie Saweda Kamara? She was chosen earlier this year through an application process managed by the Mercantile Library on behalf of the city of Cincinnati, and she will serve a two-year term to promote poetry in the community. Her new anthology, What You Need to Know About Me, presents stories of young immigrants in their own words, nearly 500 pages of them. Kamara, who grew up in Oakland, California, before earning her Ph.D. in creative writing and English literature from the University of Cincinnati, is the daughter of immigrants from Sierra Leone.

For Kamara, What You Need to Know About Me also speaks to her goals for her laureateship. “I want to contribute to Cincinnati’s embrace of the diversity of its past, present, and future,” she says. “It’s important that my role includes highlighting the multiple and complex realities of Cincinnati’s story.”

One way she’s doing that is through collaborative, multi-vocal poems, such as one she just curated for BLINK in October. Another way is through the nonprofit WordPlay, which hired Kamara as its first Director of Creative Youth Leadership. Manuel Iris, who was poet laureate from 2018 to 2021, serves on WordPlay’s board, and the city’s first laureate, Pauletta Hansel, is a teaching artist there.

Now in its 10th year, WordPlay moved to a new space on Chase Avenue in Northside earlier this year from its original home on Hamilton Avenue. The side of its building features an ArtWorks mural titled Standing on the Shoulders of Giants, which celebrates poet Mary Oliver, an Ohioan by birth, along with famous writers like Joy Harjo, James Baldwin, and Amanda Gorman. WordPlay’s programming reaches children and teenagers both in school and at the Northside space to spark storytelling through writing, performance, and visual arts. Participants can become part of Cincinnati’s own literary story, like the first-ever Cincinnati Youth Poet Laureate Rimel Kamran, a Summit Country Day student whose inauguration at WordPlay was on April 23 (Shakespeare’s birthday).

Nearby in Northside, Downbound Books offers Kamara’s anthology, as well as Iris’s recent book of poetry, This Parting Present, which won an Ohioana Reader’s Choice Award earlier this year. At least a dozen other books there also caught my eye on a recent visit, including a graphic novel of one of my childhood favorites, Anne of Green Gables. I discovered that an acquaintance had written a book about the social history of recipes, which was published as part of a series from Oxford University Press on the history of objects. And a slim hardbound volume titled How to Keep House While Drowning whose opening pages described how it had been designed—from font to organization—with neurodivergent readers in mind. I bought them all.

Michael Link, who worked in the bookstore industry before taking on a leadership role at WordPlay, talks up the transformational power of the written word for both writers and readers. He feels there’s still an important role for bookstores to play in curating experiences for the public and “putting the right books into the right hands at the right times.” He’s also a big fan of Books by the Banks, returning as an in-person book festival on November 19 at Duke Energy Convention Center.

“The best thing about this annual event is the consistently incredible lineup of authors, and I’m not just talking about headliners,” says Link, who has served as a BBTB volunteer organizer for years. “Cincinnati has some of the best authors and illustrators for young people in the country.” You might even leave inspired, he says, recalling one such case from a few years ago. “We had a young girl, Piper Hawkins, who was inspired by the festival to write and publish her own book, which debuted at the Books by the Banks the following year.”

Consider taking your own literary field trip sometime soon, check out upcoming programming at WordPlay, or attend Books by the Banks. Spending time with books and the people who write them might make our city feel at once bigger and more like home.

Books by the Banks is 10 am–4 pm November 19. Details are at booksbythebanks.org. 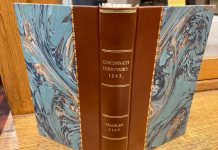