For Iris, this recognition is special not only because he stands among highly regarded literary lights (this year’s list includes a Pulitzer Prize winner and three finalists for the National Book Award) but also because the award is open any Ohio author. “The Ohioana award doesn’t have a bilingual category or translated poetry,” he says via telephone from Uaymitun, a remote beach on Mexico’s Yucatan coast. “It’s just poetry, just plain poetry in English. I am very honored that they are considering me like that.”

Iris assures me, laughing, that he really does feel like an Ohio author now. He recently got into a spirited discussion with a friend about what constituted a good diner (there are many to choose from in our city, to be sure), and he likes to start his day with the Cincinnati classic, goetta. At the end of the day, he prefers bourbon to rum, so he brought some with him to Mexico, where the spirit is hard to find.

Iris has been in Ohio for more than a decade. He earned a PhD in Romance Languages from the University of Cincinnati, and he teaches English at a local high school. While he has academic expertise in 20th century Latin American poets and while he spends his days teaching English to local teens, his real passion is writing poetry—as well as his 4-year old daughter, Olivia, to whom The Parting Present is dedicated.

In fact, Iris found out he was selected as Cincinnati’s poet laureate while at The Christ Hospital on the day Oliva was born. “My career in English was born, and my daughter was born,” he says. “Now, four years later, this is the first time I’m nominated for an award for the English version of my poems.” Olivia’s arrival again shifted Iris’s sense of home and identity. “I do not want to be a foreigner to my daughter,” he says, which is yet another reason that Ohio is now home. It’s her home, her place of origin, and that will always make it home for him. 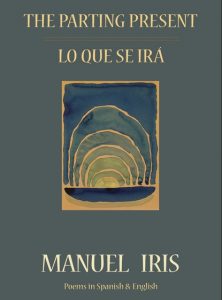 The pandemic brought Iris and his daughter closer. “I am a teacher, and she is not school age,” he says. “She was home and I was home teaching online. We would spend so many hours and days together, and we had nothing to do but be together. Outside the world was falling apart, but inside there was a sort of joy.” The bonds of home life—the sweetness of it—is explored in his poems, too.

Regarding poetry as a “sister to music,” Iris writes listening for rhythm and melody, often composing first in Spanish and then writing English translations. Both versions of each poem are included in The Parting Present. “Sometimes I am not faithful word by word,” he says. “To really understand or to really get the meaning of the poems, you need to listen to the melody between the two versions.” The space between English and Spanish is not only manifested on the page itself, but also in the poems’ content, such as “Language of the House” (included below), which explores what it will mean for Olivia to come from a family who speaks Spanish inside their home while living in a community that mostly speaks English.

“It’s a poem about a feeling I didn’t know I was going to have when my wife was pregnant, and it was the fear of which language was my daughter going to speak first,” he says. “In the house we speak Spanish, but we speak English when we leave the house. I was afraid that the language I have my deeper and stronger feelings for would be unknown to her. That’s a poem many immigrants in many countries and in many places have experienced. I can’t believe that anyone has moved somewhere that they don’t feel this fear. Language isn’t just about communication, it’s about identity and belonging. People everywhere feel that.”

As an immigrant and bilingual author, Iris says, inclusion in this year’s list of Ohioana Book Awards finalists is “already an award for me.”

The Language of the House

Sometimes I’m afraid you will talk
in the language in which I cannot dream.
I almost always wish
that you live first
the language of the house,
the one in which I lull you to sleep,
in which I imagine you
telling me your things.
(You still do not know
that there is a different music, outside)
Lately
I have been afraid of the months
because you were born here,
in this place, in this language
in which I am a foreigner
and I want
to live
in your world
in the language that you will have,
within your words.
I am afraid
that you will also know
the impossibility of belonging.
But you will build your own homeland, like anyone else.
If someone asks you where are you from,
tell them that you came from your father’s heart,
a heart that would learn any language
to talk with you.