Three years ago, Katherine Dalton read Overdressed: The Shockingly High Cost of Cheap Fashion, a book by Elizabeth L. Cline that covers exactly what it says. After learning about the fashion industry’s negative environmental impact and the inhumane conditions that clothing brands’ overseas factory workers endure, Dalton became determined to learn more and also educate others on the hidden truths of their shopping habits. In September, the 28-year-old launched Wolfpack, an online retailer of ethically sourced and sustainably made clothing, accessories, home goods, and art. Friday, March 29 marked Dalton’s grand opening of her first physical location on Main Street in the former Lucca Laser space. We sat down with Dalton (and her incredibly cute, 130-pound 1-year-old Alaskan Malamute shop dog, Timberwolf) to chat about Wolfpack’s mission.

How do you find ethically sourced products when buying wholesale for your store?
I basically have a funnel of questions that I ask when I’m buying. The No. 1 question is usually, Where and how is it made? Which for clothing can be kind of hard to figure out. When you’re buying wholesale, they don’t have that information just out in the open. If [brands are] doing things right, they’re usually advertising that up front. If ethically made [goods] is their thing, they’re trying to let everyone know because it explains the price point. If you’re paying the people in your factories a fair and living wage, your clothing is going to be more expensive than your average clothing shop. For the home goods and accessories, I’m buying directly from the maker.

Why is it important to you to sell ethically sourced goods?
I’ve been pretty interested in human rights for a while and trying to make sure I live my life in a way that doesn’t oppress anyone. I can’t say that I’m a feminist or that I’m someone who cares about people of color and people in poverty and then wear clothing that doesn’t back that up. One in six people in the world are in the garment industry, so this is a huge thing, and how many of those one in six are working in terrible conditions and paid less than a living wage? Once I really looked at the industry and learned what was going on, I felt like I had no other option. I can’t go back to the way I used to buy clothing.

You came to this realization about three years ago after reading Overdressed, which you now offer free copies of in your shop. Why?
Because I want people to know what’s going on. I always knew that if I took a straight-on look at the whole issue, I would have to change the way I lived, and so I was kind of like, I’m just going to look away, because I didn’t want to change the way that I was shopping. I was a photographer and I worked for brands that weren’t ethical, and I liked working for them; I liked the notoriety that it got me and the money it put in my bank. But a few years ago, my husband’s father passed away suddenly and it kind of changed everything about the way we were living our lives. One thing for me was moving away from photography. At that time, I was reading this book, and it sealed the deal of, Maybe my new career should be something about this.

You’re a Cincinnati native, but you attended the University of South Carolina for photography.
I was a visual communications major. I ended up going the freelance photography route right out of college [in 2013]. I was a wedding photographer for the past five or six years, which was great. I was traveling internationally and people were paying for me to do that. But it just ended up not being fulfilling. I hated that I was always alone and never around my husband, who’s a teacher. I felt like I didn’t have a community, and so going this route was an attempt to be more rooted and be in one place and make an impact rather than running around building up my own little brand. I shot my last wedding last July, and since then I’ve basically put [photography] on the back burner.

Then you launched Wolfpack. What are some of the brands you sell?
One brand that I love is Back Beat Rags. They make everything in L.A. It started by a woman who emigrated from the Philippines and worked in L.A.’s fashion district for a long time, saw what was going on, and decided she didn’t want to be a part of the old way of doing things. She started making everything out of organic cotton and hemp and paying everybody the amount that they deserve to be paid and all that good stuff. I’m really proud of the brands that we [carry]. There’s nothing that I’m trying to hide. If someone asks me, What’s this made of?I’m happy to tell them.

What’s wrong with how most people shop?
One of the biggest problems is the amount and the waste. We’re throwing away hundreds of thousands of tons of clothing every year because of the fast fashion industry, and brands are dropping new designs every single week. We’re buying cheaper clothing, and because it’s cheaper, it’s made crappier and not going to last as long. We’re buying trendier clothing, so then we throw it out faster, but it’s made of man-made materials. It’s made of polyester usually; polyester is plastic and takes like 300 years to break down. Three hundred years for that shirt that costs $4 at Forever 21. The other problem is the people on the other end in India and China and Bangladesh, who are in the factories working. They have no one to take care of their babies—they’re mostly women—and they lay their baby on the floor; they work 13-hour days and they have no overtime; they have to make a certain amount of clothing in a certain amount of time; and they get paid barely a dollar a day to do it. That’s just the beginning of what’s wrong with it. The dyes that we’re using are unhealthy; the factories run the dyes into the river that the factory workers have to bathe in later that night. It’s all a mess right now.

The thing that I have to figure out is a way to talk about that without calling people out and being like, You’re all wrong!, because none of us were taught to ask where this stuff comes from. One mindset that I’ve been trying to have with the shop is educating and empowering people rather than calling them out. I saw a fashion activist on Instagram say something along the lines of, I’m not calling you out; I’m calling you in. Like into a movement and a better way of doing things, and that’s an attitude that I’m trying to have at the shop. No one’s going to want to shop here if I’m like, You suck! And all these other brands suck! How do I empower them to make better choices instead of make them feel ashamed for not knowing any better? I still have plenty to learn about all the issues involved in sustainability, ethics, and fashion in general. I can do better, so can Wolfpack, and so can all of us, and that’s kind of the point of our business: asking, How can we do better together? and then setting our sights on that goal and working hard to get there.

What do you want people to take from their shopping experience at Wolfpack?
Hopefully I don’t get sued for this, but on our website I have a quote from Game of Thrones that says, The lone wolf dies, but the pack survives. That’s the mindset of the shop. If we keep consuming with only ourselves in mind, it’s not going to end well for the environment or any of [us]. But if we think communally and we think globally about the people we want to support and what we want to do with our money, time, and clothing, we would naturally want to take care of each other. So I hope that people walk in and feel a sense of community. I also hope they walk away feeling empowered to make better choices and they’re excited to do that.

So is that the reason for the name Wolfpack?
It’s partially that, and it’s partially because we have another dog at home [named Tomahawk] that’s a Husky, so they both look like wolves. Our friends always jokingly called us the Dalton Wolf Pack, because we go everywhere with them. It was just an easy extension of our family.

Do you have any future goals for your shop?
Oh, so many. I really hope that someday we can have our own line, so I’m hoping we can invest in some of the young designers coming out of the DAAP program. There’s a ton of empty warehouses here; I would love to bring production to Cincinnati, because I think sewing and garment jobs can be a really dignified work. Our economy needs unskilled labor jobs. We need jobs that people can have without having to go to college. So I would love to have our own lines, invest in young designers, open factories here and give back to the economy, and maybe even buy some farmland in Kentucky and grow organic cotton or hemp. I think the potential is unlimited. Those are probably really big goals and maybe a while off, but that’s what we’re hoping to do.

Click through our gallery to view more photos of this store: 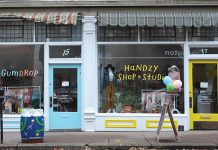