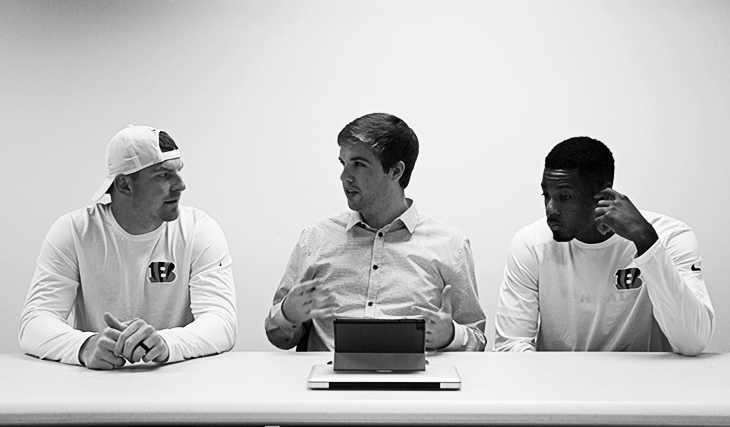 For the September football issue of Cincinnati Magazine, I had the chance to sit down with Andy Dalton and AJ Green of the Bengals to discuss their quarterback-receiver relationship, breaking down a few of their more impressive pass plays from the 2013 season. (You can read a truncated, teaser version in the print issue as well.) We discussed three separate snaps from last year, delving into audible calls at the line of scrimmage, the exact moment when AJ knows he’s going to blow by his defender, and the continued development of their on-field rapport. (Note: this interview took place about a week before Dalton signed his six-year extension. Otherwise, I would have asked him for some cash.)

Andy, I want to start with you. What are your initial thoughts when you come to the line for a pass play? Is it always the same, or is it different predicated on the play?
Andy Dalton: It all depends on the play. There are certain times where coverage makes a difference on where you’re going to be looking, other times it’s just a true progression read where you’re going to look at one guy depending on the coverage, and if he’s not open, then you’re going to move to the next. It all depends on what play is called.

What is the most important pre-snap read for you personally?
Andy: You gotta find where the safeties are, what coverage it looks like they’re playing, if they’re going to be blitzing, doing different things. That’s the initial read, with the safeties and what kind of shell they’re playing.

This first play is from the win over the Vikings in Week 16 of last season, a 29-yard touchdown throw to AJ. (The NFL doesn’t allow most of the internet to embed game clips, which is lame, so we’re linking to the actual highlight.)

There’s obviously some kind of audible on the play, so I’m curious what you’re seeing.
Andy: We’re getting a man or zone tip. I know they’re playing Cover-1 here and I’ve got a good look on the way they’re playing AJ in relation to the play we had called. AJ has a good matchup, and he’s going to win nine times out of 10.

And what exactly is Cover-1?
Andy: It just means they’re playing man coverage with a safety high in the middle of the field. 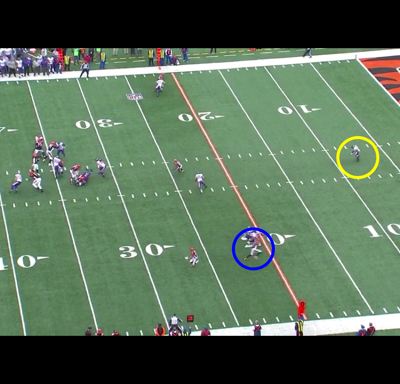 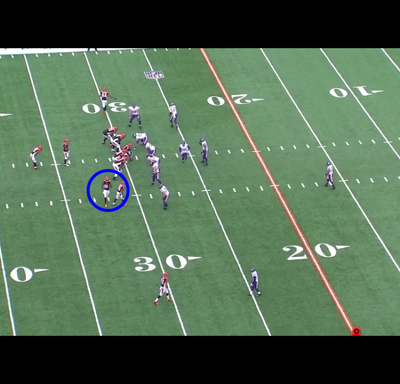 Was there a change in your route based on the audible he called coming to the line?
AJ Green: It was just a check from the stunt route to a go-route from the inside slot. 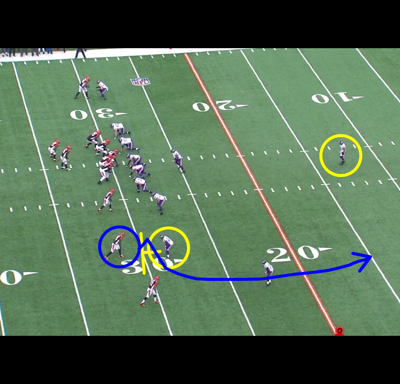 Is there anything that happened after the snap that was different than what you thought would happen before?
Andy: No, this is exactly what we wanted. This is something we work on. We go over different looks, and as soon as we got this look I knew that we were going to score a touchdown. 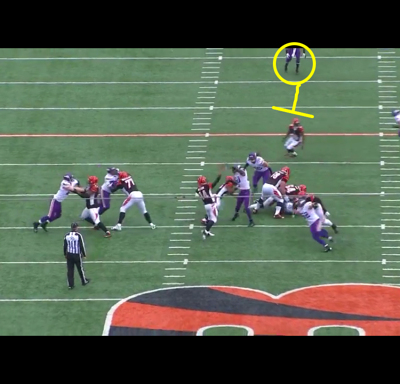 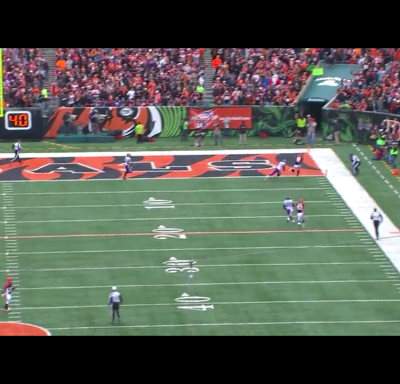 Do you ever have to keep a poker face when you come to the line if you see that you have one-on-one coverage? Is it tough to not start waving your arms to make sure that Andy sees you?
AJ: No, he knows everything that’s going on. I trust him, and he always makes the best play.

What about for you, Andy, if you come to the line and see that AJ has favorable coverage? Is it tough to not rush the play knowing you might have a good matchup, or are you always looking for that to see if you need to change the play?
Andy: You’re trying to get to the best play. At that point we got the play that we needed and it’s the exact look that we want. When we saw them playing that look, we were excited because we knew we were about to score.

The next play is from the Jets game in Week 8 (also know as the Marvin Jones Game). You two hooked up for a couple big pass plays in this matchup, and this is the second of those, a 53-yard completion in the third quarter.

This is a similar play to the last one we saw, with an audible as you come to the line.
Andy: Again, this is a look that we wanted. As soon as we got that look, we knew what we were going to check to. For us, we know that on these longer throws AJ can run by these safeties and corners, so when we get the look we want, we hit it for a big one. 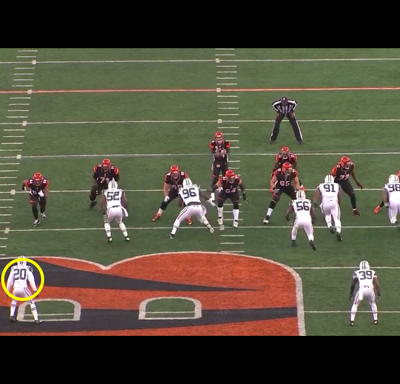 What caused the audible on this particular play?
Andy: I saw that it was quarters coverage (or Cover 4, meaning that four defensive backs divide the field into four areas and play a matchup zone), so if AJ has a big post, it all depends on the safety. The safety stayed low and AJ is going to run right past him. 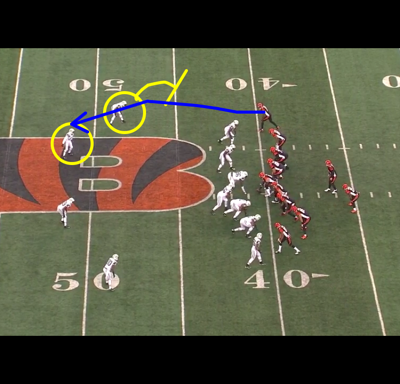 AJ: Yeah, same thing for me. Safety is kind of low and my job is to beat the safety. That corner was already done because he’s playing with outside leverage, so I knew I could just push by him and then had to get by the safety. Andy gave me a good ball to go run underneath. 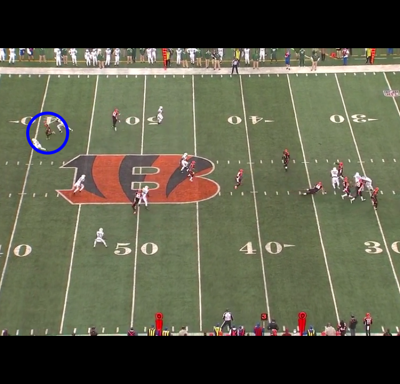 When you come to the line on a play like this, or any play, when do you know that you’re going to beat a guy?
AJ: I saw this one from the snap. The safety was low and the corner was heavy outside, so all I had to do was push at the corner. I knew if the safety was going to try to run with me I could run right past him. 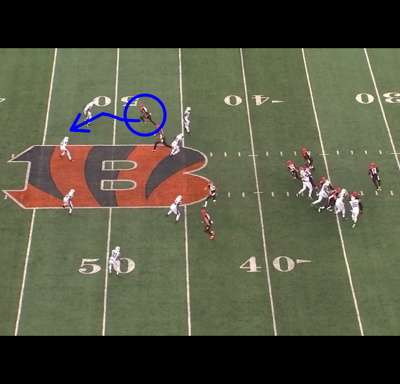 It’s no secret that AJ is always a deep threat, so Andy, are you ever worried when you come to the line and it looks like you have a favorable matchup? How often do you think they’re trying to trick you with that look?
Andy: That’s why you have other options. AJ’s not the only guy going out on routes. Obviously we want to take a shot and throw to him when we can, but if they cover, that’s why you have other guys out there.

This last play is a little different. It’s the Hail Mary from the Baltimore game in Week 10, which you guys eventually lost in overtime.

I would assume that a play like this doesn’t have as much planning going into it, but walk me through this. Is it as simple as letting the receivers run down and the QB throws it up for grabs? Andy, is your goal just to get it into the pack and let somebody make a play on it?
Andy: Uh, yeah (laughs). Basically at this point, that’s what you do. You buy enough time to let everyone get down there and then throw it up and hope it gets into one of our guys’ hands, or it gets tipped up like it did. It doesn’t always end up that way, but it’s just how we drew it up. 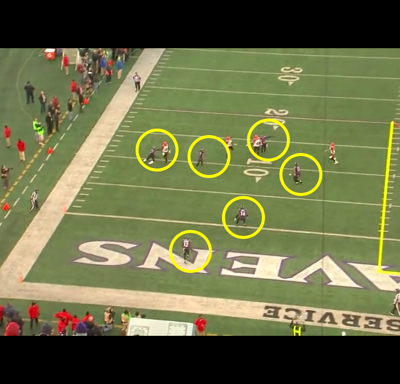 Is that the craziest pass you’ve ever caught?
AJ: Yeah, because first of all, I’m supposed to be in the pack jumping. I just ran past everybody and the ball just happened to pop up. It was luck. 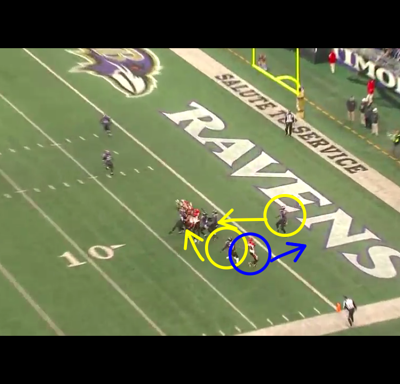 So the play is not designed for you to hang around the back?
AJ: No I’m supposed to get in there and jump, but I ran past the pack, and it worked out well. I was in the right spot at the right time.

Andy: That’s one of those plays where you get everybody in the pack, the ball can get tipped up like that, so you want to have somebody ready, and AJ was ready. 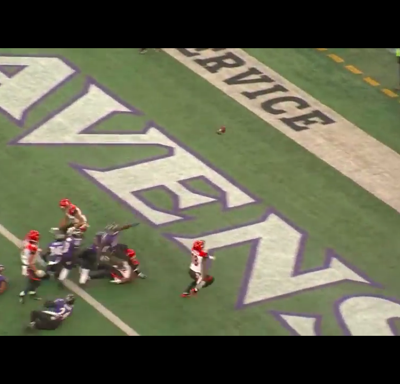 When you’re coming to the line, making pre-snap reads, is it easier knowing AJ is the guy you might be throwing to?
Andy: Absolutely. When you have one of the best receivers in the league on your team, you know that whomever he matches up against, he’s going to win. That’s why we’re able to do a lot of the things that we’re able to do.

In terms of communication between the two of you, how has that grown? This is going to be your fourth year together.
AJ: It’s changed a lot. I feel like we know each other better. Our first year, a lot of what we were going off of was raw talent. Our first couple years even. But now, he is the leader and whatever he says I try to do. We just have better chemistry now because we came in together, and we’re trying to take that next step and become one of the best duos.

There was a segment on 60 Minutes a few years ago of Tom Brady and Deion Branch, and how the two of them could communicate pass patterns just by the look they gave one another. Are you guys at that level yet? Is that what you’re working toward?
Andy: I think we both have a really good understanding of what we’re trying to do. There are certain times where if a guy is playing him a certain way, I know what he’s going to do. This is our fourth year, we’ve done it for a long time. You have those instincts of, Ok, I know what he’s going to do on this one. Even though it’s something that may not be talked about or maybe isn’t exactly how it’s drawn up. It may not be us actually looking at each other and motioning, This is what you’re going to do, but it’s something where I just understand where he’s going to be.

How often do you feel completely in sync? I’m sure there are times where you feel like you missed something on one end or the other.
AJ: It’s going to happen like that sometimes. But whenever we score, it’s good. It’s a good drive. Doesn’t matter if it’s coming to me. But we still have a lot of work to do. We’ve been together a few years, but we’re still trying to build on that. 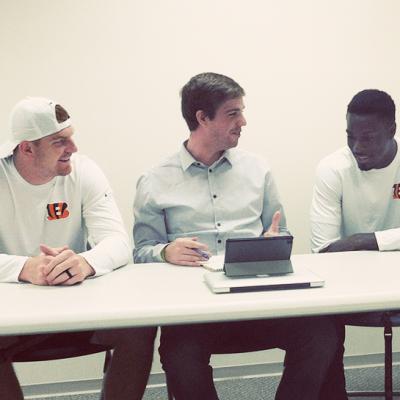