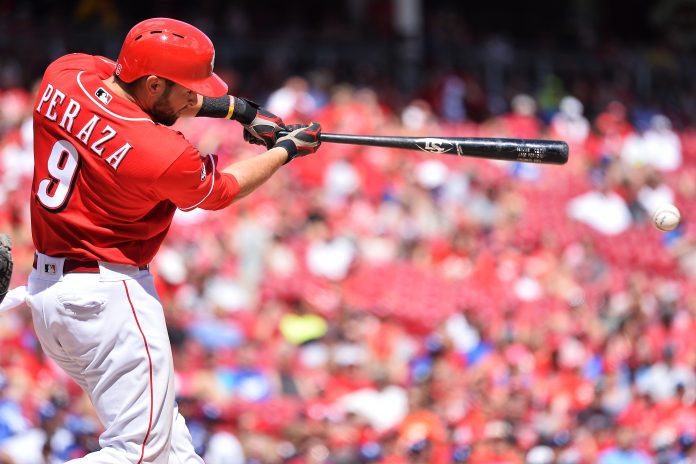 A line from a scatterbrained song sung by a scatterbrained man seems like a good intro to scatterbrained article, yes? The words on this web page constitute my final contribution to Nuxhall Way for the season, as I will be transitioning over to covering the Bengals for Fulcher 2 Stay next week.

Just about every blog I wrote about this season was written with one eye on the future, whether it be a trade-related post or a piece focusing on the Reds young pitching. That’s what 2016 was about: the future. On only a few occasions do I remember shaking my head or offering a few choice expletives after witnessing a misplay or loss. The spike in blood pressure wasn’t worth it, not with the Reds publicly acknowledging that the 2016 campaign would be a rebuilding one. That’s why Reds fans were subjected to 31 games of Jordan Pacheco, seven games of Steve Delabar, and six games of Drew Hayes. The franchise didn’t care about winning—and that’s fine.

So, I’m going to borrow the framework from which NFL writer Peter King gives his ‘Ten Things I Think I Think’ and offer Six Things I Think I Know after watching the 2016 Reds for five months:

I think I know that Jumbo Diaz, Tyler Holt, Ross Ohlendorf, and Alfredo Simon—worth a combined -2.8 wins by FanGraphs Wins Above Replacement measure—will not be suiting up for the 2017 Reds. (Gotta have at least one lay-up, folks.)

I think I know that Joey Votto (first base), Jose Peraza (shortstop), Eugenio Suarez (third base), Adam Duvall (left field), and Billy Hamilton (center field) will be in next year’s Opening Day lineup. In order to clear a spot for Dilson Herrera at second base, the Reds will A) need to find someone to take Brandon Phillips off their hands and B) convince Phillips to accept a trade after BP twice rejected trades last offseason. Should the Reds find a willing trade partner, they would likely be on the hook for most of the $14 million Phillips is due in 2017. At catcher, who knows if Devin Mesoraco will be healthy enough to earn first-team reps over Tucker Barnhart. And in right field, Scott Schebler is likely first in line if the Reds believe Jesse Winker (.397 on-base percentage in 2,000-plus minor league plate appearances) needs further time at Triple-A Louisville to hone his power stroke, as the 23-year-old has smacked just three round-trippers at Louisville this season.

I think I know that Homer Bailey and Anthony DeSclafani are the lone starters assured of spots in the 2017 rotation. Dan Straily (3.92 ERA in 154 innings) has outperformed his season-long (4.72 FIP) and career peripherals (4.71 career FIP) to date and will be 28 when next season starts. In this writer’s humble opinion, the Reds are better off moving Straily to the bullpen (possibly as a long man/swing starter) and finding out what they have with their horde of young arms.

I think I know that the three other rotation slots will be filled by some combination of Brandon Finnegan, Amir Garrett, Raisel Iglesias, John Lamb, Cody Reed, and Robert Stephenson. (To me, Michael Lorenzen’s future lies in the bullpen.) Finnegan has kicked ass lately (20 innings, four earned runs, four walks, 29 strikeouts), but his season-long control issues are difficult to ignore. I think Iglesias and his balky throwing shoulder will be provided with one additional opportunity to start. Stephenson, like Finnegan, has command problems to rectify. Garrett, a former college basketball player, remains a bit raw. Lamb—who underwent back surgery last winter and is presently on the disabled list with Louisville—needs to have a healthy offseason. Reed needs to forget about his forgettable first 10 starts in the majors. The choices the Reds make with their rotation next spring could echo three to four years down the line, as some of the losers may be relegated to bullpen duty.

I think I know that I have no idea who will be managing the Reds in 2017. I think general manager Dick Williams, slated to become the team’s chief decision-maker next year, will want to hire his own guy at some point. But if Williams hands Bryan Price a one-year extension through 2017 (provided Price would even agree to that arrangement) and the Reds flirt with a .500-ish record in 2017, there will be pressure to retain Price—who would be intimately familiar with all of the Reds young players by the end of next season—for 2018, which is when the Reds expect/will be expected to win on a regular basis again.

I think I know that the Reds will be better in 2017, likely finishing with 75-82 victories. The Reds 23-20 record since the All-Star Break has some feeling warm and fuzzy about Cincinnati, but educated fans should never forget the collective crime against baseball that the Reds’ bullpen was only a few months ago, an atrocity that fueled a 17-35 start through May. A steady onslaught of injuries to the pitching staff and an inconsistent offense played a role in the Reds forgettable first half as well. But if 2016 was about the initial slow burn of a rebuild, 2017 should offer more clarity. After next season, the Reds should have a firm grasp on what Barnhart, Duvall, Hamilton, Mesoraco, and Suarez—all players who will have multiple full seasons in the majors—are capable of; they should at least know four of the five pitchers who will fill out the rotation through the end of the decade; and most important of all, the Reds should know whether or not they are ready to field a committed winner in 2018.