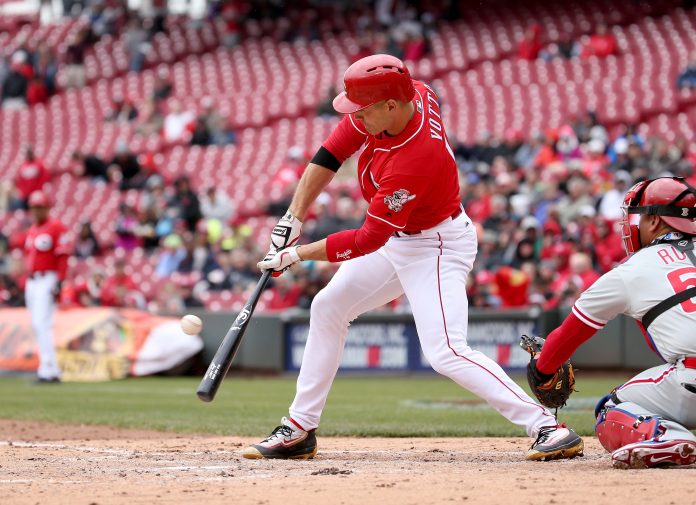 Today, I want to talk about walks, and how the Reds as an organization need to take steps to reorient their approach and acquisitions toward players with a more patient approach.

Let’s start by establishing that the Reds don’t walk much. So far, this year, the MLB average walk rate (BB%) is 8.3%. The Reds, as a team, are walking 6.5% of the time. That is 28th in MLB. Here is the complete list of players on the team who are walking more than 8.3% of the time:

You’ll notice the steep dropoff in playing time after Votto. No starters other than him are walking more than the league average.

“So what?” you say. Walks are boring. I don’t want to watch people walk. Okay, let’s get into that. Right now, with the recent offensive spurt, the Reds are 14th in baseball in scoring. In 2010, the best offensive season from the recent playoff run, they were 4th. The team’s walk rate in 2010? 8.3% (league average was 8.5% that year). Remember Paul Janish and his weak stick? He walked 9.4% of the time that year in 224 PAs. His .338 OBP would be behind only Votto and Holt on this year’s team.

The bottom 50? It includes only 13 players who generated more than 10 WAR during their careers. The top three are Art Fletcher (45.0 WAR), Hal Chase (26.0 WAR), and Charlie Hickman (20.7 WAR). Those guys all played in the deadball era. Oh, and the bottom three? Bill Bergan (-16.2 WAR), Tuck Stainback (-5.2 WAR), and Andres Thomas (-4.6 WAR). That is just an entirely different story. It is almost impossible to be a good major league hitter if you can’t take a walk.

But why is that? It’s pretty simple. Players who don’t take walks share, in general, one trait: They swing at pitches outside the strikezone. A lot. The strikezone exists for a reason. Taking a walk means, in general, that a player understands what not to swing at. Do some players get pitched around? Sure they do. But those guys typically come up already knowing how to walk. To pull three random examples: Barry Bonds walked 13.4% of the time in his first full season. Mike Trout walked 10.5% of the time. Joey Votto walked 10.0% of the time. These players, as is the case with nearly all elite hitters, already knew what not to swing at, so when pitchers started pitching around them, they let those pitches go by.

Okay, okay. But what about badball hitters? They exist, right? Yes. Yes, they do. The best one I have ever seen is Vladimir Guerrero. He walked 9.7% of the time over his career. Maybe the most famous badball hitter ever is Roberto Clemente. He walked only 6.1% of the time. So, okay, if your Clemente, swing at everything and it will work out for you. Clemente and Guerrero were both also relatively low-strikeout guys. In the current era, the average major league player strikes out more than 20% of the time. That makes drawing walks even more important, because the odds of a player making up for his low walk rate by making contact with everything is severely diminished.

By the way, Zack Cozart, if you want reason to hope, is managing to strikeout at a relatively low rate. This year, he’s striking out only 12.9% of the time. That does make up for some of his low walk rate (3.7%). But players like that are rare. The Reds, as a team, are striking out 23.1% of the time. This is 2.0% more than the league average. So one can’t claim the front office has assembled a scrappy bunch of contact hitters.

The Reds, as an organization, need to stop being seduced by toolsy guys with great speed or lots of power. They need to start paying attention to how well players control the strikezone. A while back, Carson Cistulli did some really convincing work showing that the ability to control the strikezone correlates better with major league success than any of the tools scouts traditionally grade. If you aren’t convinced by me, I encourage you to go read his work.

Fortunately, the Reds may have started to get the message. We’re all still learning what to expect from new GM Dick Williams, but on Thursday, the Reds used the second pick in the draft to select Nick Senzel, a third baseman who walked twice as much as he struck out in his most recent college season, and who does not have as much power as the other highly touted hitters who were available. You never know what’s going to happen with a draft pick, but the Reds selection here could be an early example of shift in approach. I sure hope so.