With Walt Jocketty and the Bob Castellini still waiting to pull the trigger on what many thought would be obvious trades of Johnny Cueto, Aroldis Chapman, and Jay Bruce, the rumblings of a Mike Leake trade grow louder by the day/hour/minute. There’s good reason for that, as Leake has won six of his last nine starts, including a 3-1 record with a 1.61 ERA and 0.89 WHIP in the month of July. His performance yesterday (8 IP, 4 H, 1 ER, 0 BB, 6 K) in game one of the Reds double header against the Chicago Cubs was perhaps his best of the season, and it left his name resonating even louder through the trade deadline musings. 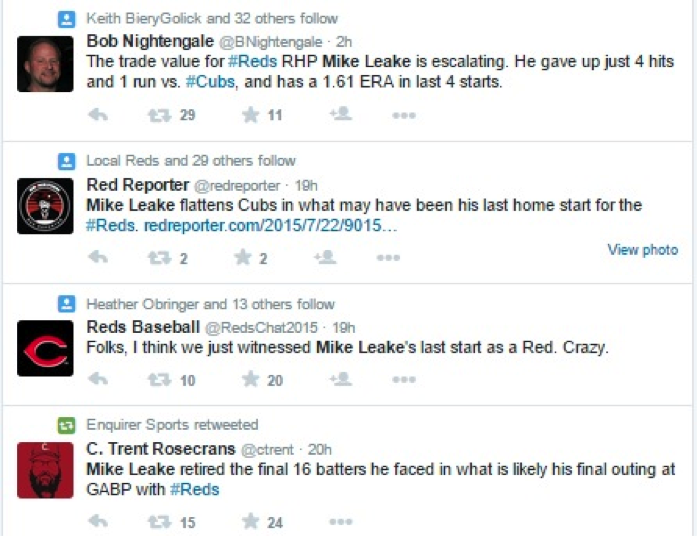 Leake’s contract situation makes it all the more likely that he’ll be headed out of Cincinnati in the very near future. He’ll be a free agent at the end of the season, which means that a team in contention could trade for him with no real intention of signing him after the playoffs come to an end. It’s the same rental idea that the Oakland Athletics utilized with John Lester during the second half of last season, and it’s a viable move for teams trying to win in the short term without spiking their payroll or gutting their farm system in the long term. The Reds will surely receive a few enticing offers for Leake, but in my opinion, he should be one of the few players that Jocketty isn’t shopping. Aside from the general fear that the Reds won’t trade anyone at all, at which point all faith/hope will be lost, retaining Leake—for a number of reasons—should be a viable option for Reds fans as the trade deadline draws near.

1. A rubber arm among the unproven:
Leake’s fastball tops out in the low 90’s, and his delivery is not one that puts his legs under particular strain, either. He was sixth in the N.L. in innings pitched last season with 214.1, and he’s on pace to surpass that mark this year—he’s currently fourth in the N.L. with 128.2. Assuming Cueto is traded, Leake would be the only proven innings eater left in a rotation full of promising youngsters who have all shown issues with fatigue and amassing high pitch counts early in games.

Taking Cueto and Leake off that list is frightening in more ways than one. First and foremost, the Reds mix of young starters (the only area where the organization has promising youth to move forward with) could potentially be thrust into more starts and pitches than they are prepared and/or ready for. Then there’s the issue of the extra innings that would be forced upon an already depleted and inadequate bullpen. The Reds bullpen ranks a dismal 25th in the MLB in total ERA (4.03) despite being bookended by J.J. Hoover (1.70) and Aroldis Chapman (1.74). With Chapman likely soon gone and the Reds shopping mostly for prospects, there’s no reason to think the bullpen will be anything more than marginally improved next season and the remainder of this one. And while we’re on the topic of scary thoughts, what if the Reds trade Cueto and Leake, and Homer Bailey has a setback in recovering from surgery before next season? A starting rotation of DeSclafani, Lorenzen, Iglesias, Moscot, and probably Robert Stephenson (obviously disregarding any starting pitchers that may result from trades) could make for an even uglier rebuilding process than everyone is preparing for.

2. Because his situation is far different than Cueto’s or Chapman’s:
Setting aside the notable differences—and the fact that Cueto and Chapman are elite pitchers, while Leake is a pretty good mid-level player—the biggest difference between Leake, Cueto, and Chapman is that the Reds can feasibly keep him. The Reds have to trade Cueto because the prospects he’ll fetch are the only hope for future success…and because they can’t afford to pay him what most of the league will as a free agent…and because he’s probably fed up with pitching for no run support. The Reds have to trade Chapman because the value of a closer will never again be higher than Chapman’s after he obliterated three of the best players in the A.L. in the All-Star Game about as easily as three middle-aged drunks in a beer league softball game.

Like Chapman, Leake’s value is also at an all-time high, but those values are two different things. In trading Chapman, the Reds can likely snag at least two strong prospects, while also alleviating the books of a closer who is being paid starter money (on a bad team, no less). Leake, on the other hand, is a top-end third or fourth starter with no stats or pitches that will blow anyone away. He is the kind of player that teams covet—and might over-spend for—as a final small piece to their playoff-run puzzle, but he’s not the type of player who will result in a long-term, potentially franchise altering trade in the way that Cueto and Chapman can. The Reds incentive for trading Leake is more so that they don’t lose him in free agency for only a compensatory draft pick, to which I would suggest, “then don’t lose him.” As Nuxhall Way’s fearless leader, Justin Williams, pointed out to me earlier this week, “Mike Leake is exactly the kind of player that some team with too much money is going to pay too much money for.” He’s not wrong, but if the Reds start off free agency with a qualifying offer larger than Leake expected, they have a chance of keeping him in town without totally breaking the bank. Considering that Cueto and Chapman should be gone, the Reds could certainly reach a little bit to keep a consistent, quality starter in Leake. At any rate, I don’t see a scenario where the Reds get more value from trading Leake than they would in keeping him, especially with his high ground-ball rate being of particular importance at home-run friendly Great American Ball Park.

3. Because the next two or three years are going to be hard enough with him:
It’s widely known at this point that the Reds are probably a solid three years away from playing consistent winning baseball, and that’s if they get what they should in several theoretical trades which haven’t happened yet. Leake (61-47 in six seasons with the Reds) is the kind of pitcher who can help to right the ship during that type of transition period—a 15-win, 200-inning pitcher if he gets the run support. Best-case scenario, he plays second fiddle to a healthy Homer Bailey next season; worst-case, he’s at least a veteran presence (and a day of rest for the bullpen) in what could be one of the youngest starting rotations in the MLB. In my eyes, Leake is a better Bronson Arroyo, he’s only 27 years old, and hasn’t been injured since 2010 (and is a decent candidate to pitch well into his Jamie Moyer years). With Leake’s control, and the lack of stress his arm endures compared to most pitchers, there’s no baseball logic against him having six or seven quality years left, if not more. If I’m Jocketty, I trade Cueto, Chapman, and Bruce if I can, and then do my best to lock up Leake for a decent amount of time. If this whole rebuilding process goes to plan, Leake slots back into being one of the best three or four men in baseball in three years’ time. If it doesn’t, a 30-year old rubber-armed pitcher isn’t worth THAT much less in a trade than he is right now at 27.

The next eight days will determine much of the next eight years for the Cincinnati Reds, and it’ll be an eight years better off if Mike Leake is around for most of that time. Either way, don’t count it out. We all know that with Walt Jocketty and Bob Castellini in charge, anything (or nothing) could happen.