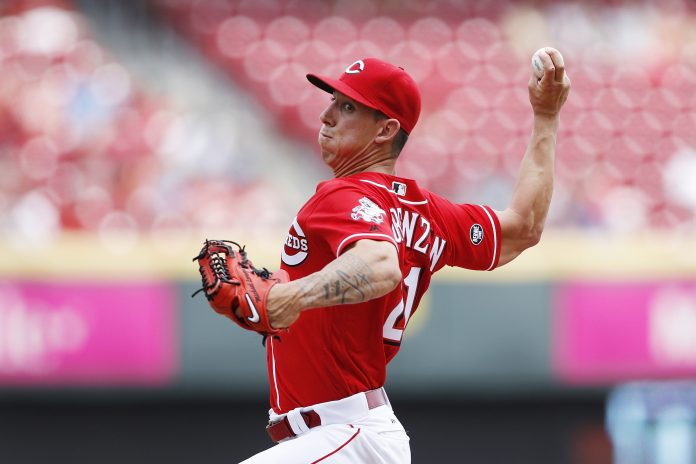 The Reds have raced to a 22-15 second half record in part due to a resurgent pitching staff. With the regular seasons of the organization’s minor league affiliates nearing their respective end, what better time than now than to reflect on the Reds army of 26-and-under starters and determine which pitchers have seen their stock rise during 2016, and which have taken a step back. For the purposes of this article, only the 26-and-under starters who could conceivably pitch for the Reds during the 2018 season will be considered.

Jonathon Crawford: Stock Up
The former first round pick is still finding himself after surgery on his right (throwing) shoulder last August, and the mere fact that he is able to take the ball every fifth day for High-A Daytona after losing a year-and-a-half to shoulder issues makes this season a success for the 24-year-old. The organization still believes in Crawford’s talent, and the former first round pick will likely begin what could be a career-defining season at Double-A Pensacola next spring.

Rookie Davis: Stock Up
The chief returning piece from the Yankees in the Aroldis Chapman trade, Davis outperformed his peripheral numbers in Double-A (96 innings, 5.4 K/9, 2.4 BB/9, 2.72/4.29 ERA/FIP) despite pitching through various injuries, which robbed him of his normal mid-90s velocity and cut down on his strikeouts. Davis earned a promotion to Triple-A Louisville after he struck out 25 over 23 innings in his final four starts with Pensacola. The 23-year-old righty will compete for a starting spot with the Reds in spring training, but will almost assuredly begin 2017 with Louisville.

Anthony DeSclafani: Stock Up
An oblique injury cost DeSclafani the first two months of this season, but the 26-year-old righty has an ERA/FIP of 3.27/3.72 through 14 starts. He’s averaging nearly eight strikeouts per nine innings while limiting his walks to a tidy two per nine innings. With the Reds cutting costs over the last two seasons, DeSclafani—arbitration-eligible for the first time after the 2017 season—could be the recipient of a contract extension offer over the winter as the club begins to lock up some of its younger players.

Brandon Finnegan: Stock Down
Would you, dear reader, be surprised to know that Finnegan is only 23 years of age? (In fact, Finnegan is only one day older than Cody Reed.) Because he was pitching in the majors when he was 21, Finnegan is the victim of some unfair expectations because of A) a longevity bias B) he spent all of 2015 switching between a starter role and a reliever role. The Reds acquired Finnegan from Kansas City in part because they thought he could start in the majors. In this lost 2016 season, the Reds provided Finnegan with an opportunity to be a full-time starter. The result? A 4.32/5.61 ERA/FIP split in 141.2 innings. Finnegan’s strikeout rate is the lowest of his career, and among 83 qualified starters, only Francisco Liriano has walked more batters per nine innings, a significant reason why Finnegan has failed to pitch at least six innings in 11 of his 25 starts. It will be interesting to see if Finnegan, who has also had control issues as a reliever, winds up back in the bullpen in 2017.

Nick Howard: Stock Down
Another year, another lost campaign for the Reds’ 2014 first round pick. Howard, who hasn’t pitched since late June, walked 81 batters over 58 innings over the past two seasons, a stunning and sustained loss of control for the former University of Virginia standout.

Raisel Iglesias: Stock Down
Iglesias and his live wire of a right arm have lost value simply because, for the second year in a row, Iggy’s shoulder has kept him from finishing the season in the rotation. Presumably, the Reds will allow the righty another chance to prepare as a starter over the winter. On the other hand, using Iglesias as a multiple-inning strikeout machine isn’t a bad Plan B.

John Lamb: Stock Down
A back malady robbed Lamb of the first month of the season, and he lacked any sort of consistency in 14 starts after posting a splendid K-BB rate of 17.7 percent in 10 starts with the Reds last season. At age 26, Lamb—presently on the disabled list with Louisville—still has a shot at earning a future rotation slot, but the clock is ticking on his window of opportunity.

Michael Lorenzen: Stock Up
Another early-season injury casualty, Lorenzen didn’t make his 2016 debut with Cincinnati until June 24 because of an elbow injury and a bout of mononucleosis. And after spending the bulk of his time in the rotation in 2015 with little success (ERA/FIP of 5.45/5.48 in 21 starts), Lorenzen was transferred to a more familiar role in the bullpen, as the 24-year-old righty was a full-time reliever in college and in his first season of pro ball in 2013. Lorenzen has thrived as a reliever, striking out 25 percent of the opposition and limiting hitters to a .212 batting average. It’s conceivable that Lorenzen will be given another shot to start in the spring, but it’s more likely that Lorenzen’s long-term role lies in the bullpen—hopefully as a multi-inning fireman.

Tyler Mahle: Stock Up
A seventh round pick of the Reds in 2013, Mahle has proven to be a sage pickup for the club. Named the Reds 2015 minor league player of the year after dominating Low-A Dayton (152 innings, 2.43/2.93 ERA/FIP, 8 K/9, 1.5 BB/9), Mahle tossed a nine-inning no-hitter for Daytona on June 13 before garnering a promotion to Pensacola.

Keury Mella: Stock Down
Mella, who came over with Adam Duvall from San Francisco in last summer’s Mike Leake trade, has regressed in his second full season of High-A ball in 2016, posting a career-low strikeout rate while allowing 143 hits in 125.2 innings. The Reds will likely continue to let the 23-year-old Mella start, but the right-hander’s future probably lies in the bullpen.

Jon Moscot: Stock Down
This poor guy has endured some Charlie Brown-esque luck over the past year-and-a-half. After a left shoulder injury prematurely ended his 2015 season, Moscot lasted only 21.1 innings in the bigs in 2016, first because of a combination of ineffectiveness and lingering soreness in his surgically-repaired shoulder. Moscot then underwent Tommy John surgery in mid-July to fix his ailing (right) pitching elbow. In order to keep pace with the organization’s more highly-touted pitchers, Moscot needed to impress the Reds in 2016. Now, he may not pitch again until the 2018 season.

Cody Reed: Stock Up
Despite Reed’s very real struggles in 10 starts with the Reds prior to his demotion, there’s still plenty to like about the 23-year-old southpaw. Earlier this week, Redleg Nation did a fine job of outlining Reed’s struggles (command, home run rate, throwing his fastball too often in the heart of the strike zone), but a positive development was the progression of Reed’s changeup, a necessary third pitch that Reed will need to complement what should be a plus-fastball and plus-plus slider in the future.

Sal Romano: Stock Up
The big man has taken a giant step forward in 2016 at Pensacola, registering career-best marks in K/9 (8.5) and BB/9 (2.1) through 142 innings. Standing at 6-5 and 260 pounds and armed with a mid-90s fastball, Romano may be in line for a future move to the bullpen, but his improvement as a starter this summer has to be perking the ears of the Reds brass.

Jackson Stephens: Stock Up
A seemingly innocuous 18th round pick in the 2012 draft, Stephens proved himself last season at Daytona when he delivered his best season to date despite a 78-inning increase from 2014 to 2015. Though his walk rate his increased this season at Pensacola, the 6-3, 205-pound right-hander has also bumped up his strikeout rate to complement a very solid 3.17/3.13 ERA/FIP over 144.2 innings. Still only 22, Stephens is in line to pitch at Louisville next season.

Robert Stephenson: Stock Down
Stephenson did a solid job in two spot starts in April for the Reds (14 innings, four earned runs, four walks, four strikeouts), but he has regressed in his second season at Louisville, posting a career-low K/9 (8.4) while still struggling with command. Stephenson, who has never had a stint at Double-A or Triple-A where he averaged less than 4.4 walks per nine innings, was recently called-out publicly by Louisville manager Delino DeShields, a move that came off as a psychological ploy attempting to right arguably the Reds top pitching prospect. Stephenson is still young (23), so there would be no shame in the righty returning to Louisville in 2017, but the Reds would surely like to see their 2011 first round draft pick take the next step forward and play a large role with the 2017 Reds.

Nick Travieso: Stock Down
For the second year in a row, injuries have kept Travieso from building up innings. Pitching at Pensacola this summer, Travieso’s K/9 (6.8) is his lowest since 2013 and he’s walking more batters (4.1 K/9) than he ever has in his pro career. The Reds have been high on the 22-year-old right-hander since they drafted him, and the Florida native is a fun guy to talk to, but he has undoubtedly fallen behind some of his peers (Davis, Garrett, Reed) on the development curve, and it wouldn’t be a shock to see him begin the 2017 campaign back at Pensacola.