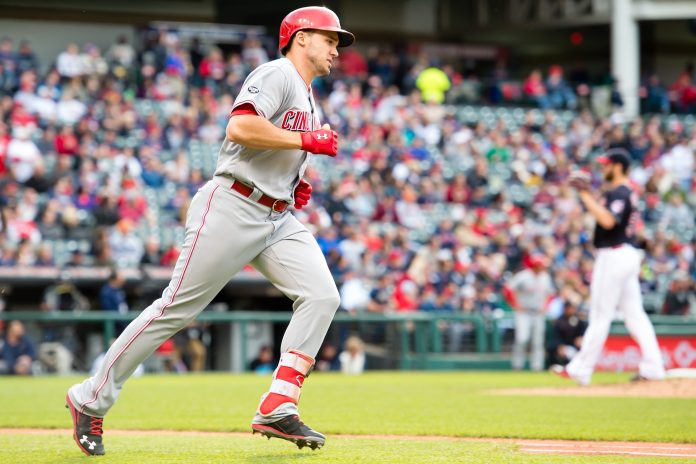 Last July, the Reds traded soon-to-be free agent pitcher Mike Leake to San Francisco in exchange for 21-year-old right-hander Keury Mella. Mella (and his blazing, mid-90s fastball) was ranked as the top pitching prospect in the Giants organization by various publications in the business of making such rankings.

In essence, the Reds were trading a couple months of Leake for a young pitcher with a lot of upside. Good deal, right?

Fast forward to the end of May 2016, and Duvall is the talk of the town. On the heels of his two-homer game in Denver on Monday, Duvall is hitting .271/.305/.606 with 13 home runs and 29 RBI. After beating out Scott Schebler for the full-time job in left field early this year, Duvall went nuts. His 11 homers in the month of May were tops in the National League, and he just keeps hammering the ball. In fact, 26 of Duvall’s 42 hits this season have been of the extra-base variety.

Duvall is the Most Interesting Man in Baseball: I don’t always hit the ball, but when I do, I get extra bases.

It’s hard to believe right now, ten months later, that Duvall was basically an afterthought in that deadline deal, but it’s true. Over at Redleg Nation, we literally included Duvall as parenthetical information in our discussion of the trade. Pretty much all the coverage of the deal focused on Mella as the primary piece, and even in hindsight, that was not unreasonable.

After all, as a 25-year-old rookie with the Giants, Duvall hit only .192/.234/.342 in his first shot at big league pitching.* He had had some success with the bat in the minors—in 2014, Duvall hit 27 homers in 91 games in AAA—but procured a reputation as a brutal fielder at the hot corner who had trouble with plate discipline.

*Of course, Duvall did hit a home run in his first big league game. The opposing pitcher? Cincinnati’s Mike Leake.

Besides poor defense, the knock on Duvall had always been his inability to get on base consistently, and his refusal to take a walk. In their annual book—which I find is worth the money every year—Baseball Prospectus had this to say about Duvall:

Duvall is a one-dimensional player who came to Cincinnati last summer as part of the Mike Leake trade, but since that one dimension is right-handed power, he has a chance. The baseball world has finally agreed they can no longer stomach watching him at third base, so the latest plan is for Duvall to live out his dreams in left field; unfortunately, those dreams are often the ones where you’re chasing after something but never quite catch it. He doesn’t make enough contact or draw enough walks to post a serviceable on-base percentage, but when he catches up to an ill-placed fastball he can put a serious hurt on it. Duvall is a poor man’s Mark Trumbo, making him a reasonable enough outfield placeholder for a rebuilding team but not a long-term solution.

That assessment seems, to me, to be right on the mark. Duvall’s power is as good as anyone in the league, but the holes in his game are as big as anyone’s, as well. Look at that .911 OPS; it’s powered almost exclusively by his slugging percentage* of .606, a SLG that puts him within the top five among all major league hitters (Trumbo is on the cusp of the top ten, too).

*As discussed in the newest episode of the Nuxhall Way podcast.

Even better, Duvall’s ISO—isolated power, a measure of extra bases per at-bat and a good shorthand to show how much power a hitter has—of .335 is second only to David Ortiz among all major league hitters. When he hits it, he hits the ball hard.

The flip side of that is Duvall’s .305 on-base percentage, a function of having just six walks—against 46 strikeouts!—in 165 plate appearances. His BB% is a paltry 3.6 percent—which, to be fair, is somewhat below the walk rate we saw from him in the minors. But still, it’s not good, and he’s 27 years old now, so let’s not expect Duvall to learn plate discipline at the major league level. He is what he is.

But you know what? I’m satisfied with what he is. Duvall has crazy, insane power to go along with a lot of flaws that prevented him from getting a shot at a regular job in the big leagues until his age-27 season. That batting average is never going to get much higher than it is now, and there is no reason to believe that he’ll ever master the strike zone any better than what we’re currently seeing. His defense has been barely passable in left field this season, which is understandable, since Duvall had played just one game in the outfield in his entire professional career before last year.

In other words, he isn’t a perfect player. If Duvall is going to make it as a full-time big leaguer for the next few years, it’ll be on the strength of…well, his strength. That power. And I think he has a chance to do that. A guy that can hit the ball as hard as he can would have a place in my lineup, especially right now, when the Reds are searching for anyone that can put runs on the scoreboard.

Listen, Duvall is making a good case to be an All-Star this year, so I’m not trying to harsh your mellow by pointing out some of his inadequacies. I love the guy. I’m glad Duvall is a Red. He’s a relatively local guy who went to the University of Louisville. He regularly pounds the ball into the upper deck and has been one of the few reasons to watch the Reds this season. It’s a great story.

Do I think he’s the long-term solution for the Reds in left field? No, but that doesn’t mean he can’t be a fun player to watch for the next few seasons. And if he keeps hitting with this kind of power, it may be difficult to take him out of the lineup even when a better option appears on the scene. Duvall has grabbed the brass ring and taken advantage of the opportunity he was given. I love guys like that.

Oh, and by the way, Keury Mella is looking pretty good this season in high-A ball for Daytona, too (4-4, 2.64 ERA). At this point, however, he has a lot of work to do if he doesn’t want to be the historical afterthought in that Leake trade.