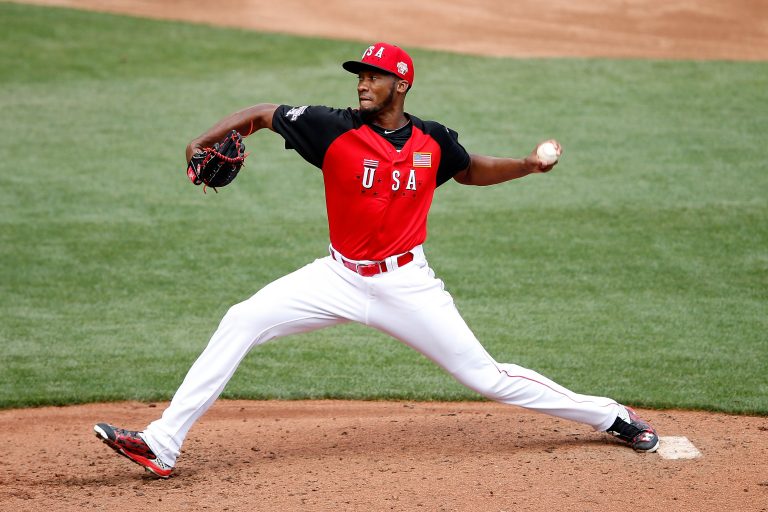 It’s call-up season for the Cincinnati Reds, and every of the call-ups you’ll see has passed through Triple-A Louisville this season, which means Delino DeShields has been their manager. I talked to DeShields and got his thoughts on a few of the big names.

On what he had seen from Jesse Winker this year: “Like a lot of young kids, they spend most of their time on their offense—their hitting. So I had a conversation with him…I feel like he’s gonna hit, but the rest of his game was going to need to improve. So he really picked it up and started working on it. So his work habits have really improved.”

I noted that I had seen Winker getting to balls lately that I hadn’t known were in his range before. DeShields said he’s been working on it, even in batting practice. Shagging balls in earnest instead of “holding court.”

On Amir Garrett: “Amir is improving by leaps and bounds…I’d have no problem with him starting in a big league ballgame. I think he can compete on that level right now. Whether or not they decide to give him that opportunity—your guess is as good as mine.”

Garrett is also noted as someone who works hard to correct problems after a bad start. DeShields called him, “A quick learner. He makes adjustments fast.”

I also asked if there was anyone he thought might be getting overlooked, and DeShields very quickly pointed out Hernan Iribarren. Iribarren is 32, but currently leads the International League in hitting and has played every position this year except catcher (yes, he has pitched, too). “Hopefully he’s done enough to open some eyes.”

On Tony Renda, who Reds fans have already seen a little of this season: “I believe he can play every day in the big leagues. Whether or not he’ll get that opportunity here with the Reds, I don’t know. The infield situation here with the Reds… it’s getting crowded.”

Dilson Herrera, acquired in the Jay Bruce trade, hasn’t played much due to injury. DeShields said, however, that he’s “liked what I’ve seen.” And of course, there is Robert Stephenson, who has had tension with DeShields lately. DeShields noted, however, that “the job’s there waiting for him.” DeShields also said Cody Reed has had a good demeanor since coming down and, “I think Cody’s gonna be a really good pitcher.”

From my own observations, I would say there is a reason that people are talking about Renda. He seems to have opened a lot of eyes. His size makes him easy to underestimate, but he has already earned a reputation in Louisville as one of the hardest working and most prepared players on the team, and his numbers back him up.

Winker, as a hitter, has been ready all year, but his defense has gotten much better. He has a solid arm as well. He’s never going to win a gold glove, but he isn’t frighteningly bad in the outfield right now.

Amir Garrett is, for my money, the best pitching prospect in the system now. He works and he adjusts and his results have been better than either Reed or Stephenson have gotten. Watch him closely.