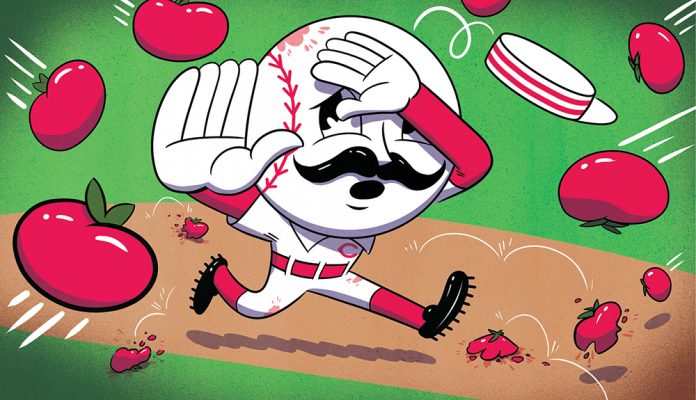 Around here, April is the happiest month—or at least the most optimistic. After all, we’ve been celebrating baseball’s Opening Day for more than a century. The city’s first parade, which featured Cincinnati Reds players in a horse-powered wagon, took place in 1890.

This year, however, the prevailing sentiment seems to be unease. Starting with last season’s trade deadline, the home team hit the reset button, offloading stars Johnny Cueto, Todd Frazier, and Aroldis Chapman for a clutch of dreamy prospects. But the problem isn’t the rebuild itself. Instead, it’s the growing evidence that the Reds are a team trapped by their own conservatism, an approach too inflexible and incurious to compete with the league’s top teams.

These complaints might seem unfair in light of the franchise’s clear improvement under principal owner Bob Castellini, who modernized the fan experience, funneled profits back onto the field, and above all, provided the franchise with a culture of stability. He also brought on Walt Jocketty as general manager—a safe and familiar hire, given their overlapping tenures with the St. Louis Cardinals—and together they assembled a group of players who, from 2010 to 2013, enjoyed the best run by a Cincinnati squad since the Big Red Machine. Still, those teams never managed to win a playoff series. Even worse, after two straight disappointing seasons, it’s become clear that, in good times and in bad, the Reds’ front office tends to be rigid and insular, slow to adapt but quick to recycle. What once felt like stability now feels like stagnation.

It’s worth noting that this trend doesn’t emerge from baseball’s old culture war of intangibles vs. analytics—or, as Reds fans like to call it, Marty Brennaman vs. Joey Votto. The Reds have innovated, outside of the announcing booth at least. In their minor league parks, they’ve begun installing 3-D Doppler radar systems that track just how fast a breaking ball spins or where a pitcher releases his fastball. And this offseason the team announced that Dick Williams, a fortysomething data junkie with a background in investment banking, would succeed Jocketty.

The problems, rather, flow from a deeper, almost philosophical place. Consider the case of Jose Peraza, one of those newly acquired prospects. Peraza is an exciting player—compact swing, good defense at shortstop or second base, and impressive-to-anyone-not-named-Billy-Hamilton speed. Best of all, he’s young, making his big-league debut last summer with the Dodgers at age 21. So it made sense that the Reds targeted him this winter when the Dodgers inquired about Chapman. Even though that deal collapsed after news broke that Chapman had allegedly “choked” his girlfriend, the Reds fell hard for Peraza, and completed an elaborate three-way trade a few weeks later, shipping out Frazier for Peraza and some lesser prospects.

To which the baseball cognoscenti responded: Huh? On the face of it, Frazier seemed like a more valuable chip than Chapman, in part because the slugger came with a longer, cheaper contract. Were the Reds right to key in on Peraza as a potential star, or is it more likely that they became fixated on him, even as the cost ballooned from Chapman to Frazier? We won’t know for sure until Peraza has played for a few seasons. Still, the move fits an alarmingly broad pattern. You can see it in Jocketty’s rigid rebuilding plan, which prioritizes experienced prospects over those with upside. You can see it in specific acquisitions; when the Reds eventually dealt Chapman to the Yankees, the chief prize was a third baseman named Eric Jagielo—a player the Reds had once planned to draft themselves.

You can see it with the number of ex-Reds in front office positions. You can even see it in Dick Williams, the new GM tapped to marshal the team’s youth movement who also extends their tradition of incestuous baseball hires—not just because his father and uncle are minority team owners, but because the Reds appear to have made another big promotion after considering only internal candidates, much like they did with manager Bryan Price.

Williams may turn out to be a fine GM, just as Peraza may develop into a stud. What’s troubling is the process. Smart teams realize they can adapt when a trade goes bad, that people with good baseball ideas may exist outside their psycho-geographical bubble. The Reds seem less like a smart team than a stubborn one. And it’s getting harder and harder to shake the sense that this mindset is now endemic to Cincinnati baseball—as much a part of the franchise’s DNA as parades on Opening Day, Mr. Red dancing on the dugout, and a transcendent streak of 1970s baseball that slips ever further away.