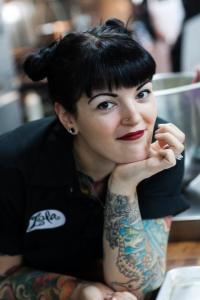 Congratulations to Pastry Chef Summer Genetti, who begins a new chapter in her sugar chronicles as the pastry chef of Cleveland’s wildly popular Lola Bistro and its sibling restaurant Lolita.

Referred to Lola’s chef/owner Michael Symon by Le Bernadin’s former pastry chef Michael Laiskonis (who Genetti did a brief apprenticeship with), she secured the position in an audition by wowing the chefs with no less than 13 desserts, Baked Alaska with pistachio cardamon cake + peach ice cream + roasted peaches, and her chocolate pot de creme crowned in salted caramel popcorn among them (expect to see the latter, a real crowd pleaser, on Lola’s dessert menu).

Genetti says: “While leaving Cincinnati and all that it contains for me is certainly the most difficult thing I have ever done, I am incredibly excited to join Chef Symon and his dynamic team at Lola and Lolita. His good nature, commitment to farm-to-table cooking, and his genuine love for his guests and staff really resonates with me. The cuisine is superlative, honest, beautiful, and not without a healthy dose of humor. To say that it’s an honor to be chosen by such a talented chef would be an understatement. I know that I’m leaving my hometown in extremely capable hands, and excited to represent this river-town on the great lake”.

The self-taught Genetti began her career selling cupcakes to a coffeeshop down the street from the tattoo parlor where she was employed as a body piercer. From there she built her reputation in local kitchens that began with Chef Jimmy Gherardi at J’s Seafood, eventually developing a mentoring relationship with Chef Jean-Robert de Cavel as the pastry chef of his restaurants Pho Paris and Chalk. It was during this period that Genetti’s distinct style for combining sweet and savory flavors in deeply flavored, seriously whimsical desserts grew. “Summer has the unique ability to create dishes that follow the seasons as savory dishes do, never forgetting they’ll be the last bites of a memorable meal” says de Cavel. After Chalk closed in 2008, Genetti was hired as the Executive Pastry Chef of The Palace Restaurant at The Cincinnatian Hotel where she added custom desserts, specialty celebration cakes, and tea pastries to her dessert menu, as well as a Rising Star Chef award from Gayot. After three years at the helm of The Cincinnatian’s hyper-productive pastry kitchen, Genetti left to join her long-time friend Chef Shoshannah Hafner at her Northside restaurant, Honey.

Cincinnati will miss her. Cleveland, be prepared to rock a little harder.