If there was any doubt about whether libraries still matter, the question seems 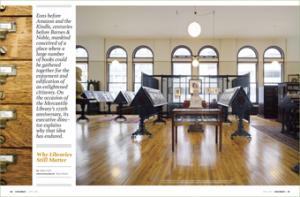 to have been well and truly answered, at least in this corner of the state, when in an economically catastrophic year, 73 percent of voters approved the 2009 tax levy to support the Public Library of Cincinnati and Hamilton County. There’s no question that the lopsided victory reflected that institution’s long history of good management and great service, but I think that it can also be read as a referendum on the very idea of collecting a bunch of books under one roof in the age of supposed Internet domination. I would further bet that any public library not actively torturing household pets would have stood a pretty good chance of getting voter support. Even the surging anti-tax forces didn’t sound as if their hearts were in their work when they tried to rally a little opposition to the levy. Cincinnati’s public librarians were too polite and too relieved to crow about the big win, but they couldn’t help notice in the results that there was only one precinct where the levy failed to pass. Ultimately, the levy passed because libraries matter.

Why is that? How do they matter? I think that first and foremost, libraries matter because a significant number of us love to read. Deeply. Thanks to the American insistence on education and the belief that every citizen ought to be literate, we’re a nation of pretty good readers. And we have been pretty good readers for generations. If reading is not yet in our DNA, it’s getting there through that epigenetic stuff we’ve been—a-ha!—reading about. Sure, there are anti-readers, people who tell their children to get their nose out of that book. Or at least there are anti-readers in, well, books. But anti-readers are villains. Bad guys. They’re up against latter-day saints like Laura Bush and Bono. Who wants to be on that team?

Even the worst schools manage to turn out some people who like to read, and no matter what you’ve heard, most schools do better than that. Even the much maligned big-city public schools turn out pretty good readers by the millions. No, not everyone reads a book at every opportunity, and there are capable readers who freely admit that they haven’t read a book in years. But even those bookless types remember, in some part of their brains, leaning against a parent or an aunt and being read to. They remember the substitute teacher who ignored the lesson plan and read a book aloud. They remember at least one time when they were reading something they couldn’t put down. And those are powerful memories, good and deep. Libraries are the guardians of those memories. We know that we can revisit those memories by walking in the door, and I think that matters to us enough to hang the (very modest) expense.

Here’s another reason libraries matter: Because they are good places to be. Sometimes they’re even great places to be. It doesn’t matter whether you’re visiting the basement of a hard-used elementary school, the cozy branch library on Warsaw Avenue, the Brezhnev-era monstrosity on the urban campus, the pleasantly ugly small town Carnegie-funded building, or the Beaux Arts temple in the heart of the city—a library is almost always a better place to be than most of the other venues in your work-addled life. Way better than your cubicle. Infinitely better than your traffic-stymied car. Better than big-box stores. Much, much better than airports.

With very few exceptions, a library is a calming place. It’s not just that there’s no commerce or career advancement in a library; there’s not even the slightest expectation of those worthy activities. Great libraries—large and small, public and private—wrap you in silence, offer you exactly what you had meant to read if only you had remembered it, and tuck you into a comfortable chair where no one will bother you till closing time. Libraries engender out-of-body experiences—mushroom-free. And a library doesn’t have to be great to be good. It just has to have books. Even a library that’s been stupidly rebadged as a “Resource Center” has books. That’s all you really need. Books and a place to sit. You may not get to the library more than once every five years, but you want it to be there. It’s an insurance policy.

Libraries were the “third place” after home and work a hundred years before the term was invented. That matters. Libraries—specifically public libraries—matter because they are one of the widest and best understood manifestations of government as a benign force. It is and will probably always be fashionable to bash government, but public libraries represent to most people the kind of service that government can not only do but should do. And, except for the dark, dirty details of funding, public libraries are done well. They are, for the most part, near the people who use them. Their employees are helpful. Unlike far too many government employees, public librarians step up and ask what they can do for you. And then, if it is at all possible, they do it. That matters.

We live in a world full of phony fun. Theme parks. “Family-oriented” activities. Face painting. Play dates. Dolls with backstories. Thank goodness—and thanks to the foresight of readers from generations past—we have libraries to show us and the generations we are trying against daunting odds to raise as thinkers, that fun does not necessarily require a rigid grin or manic shrieks. Fun can be private and absorbing and it does not have to be about spending money. Libraries are where we show children that fun doesn’t have to be organized by corporations or dreamed up by committees. In libraries we can show our children and our grandchildren that there is pleasure to be had in deciding for oneself what story we will sink into, what other worlds there are, how we are like everyone in our needs and minds, and how we are unlike anyone in our needs and minds. We can show them how simple it is to pick up a book from a shelf, a book about anything and anyone, and how simple it is to plop down and read it. Because how our children turn out matters enormously to us, libraries matter.

Libraries are an alternative to mindless noise. There are exceptions, of course. Public libraries seem to have agreed that there is no point in trying to control the sound level on Saturday mornings when the minivans descend. At some point, public libraries decided that it is better to have chattering families than not, and it is hard to disagree with that. But most children grow up and understand that the quiet of a library has value. They understand that quiet can be companionable and that it greatly adds to the pleasure of reading. Because even the most ardent rocker eventually needs a fix of quiet, libraries matter.

Full disclosure—as the custodian of the city’s oldest library, an institution that has just replumbed, rewired, repainted, and rearranged itself in celebration of 175 years at the center of the city and at the center of city intellectual life, I cannot even pretend to be unbiased on the questions of why or whether libraries matter. If I didn’t believe libraries matter, I wouldn’t be spending my golden years dreaming of better decimal systems.

Libraries, when they are not run by ideologues or theocrats, have no agenda. They are genuinely open markets of ideas. We may wander in and sample the wares in these intellectual souks, check for ripeness and spoilage, compare quality, heft the goods, and otherwise evaluate, and we may do all this alongside people we would not otherwise encounter in our lot-size-restricted suburb or time-worn city neighborhood or in the glow of our personal computers. We will stand alongside someone we don’t know and we won’t mind it. No one will tell us to get out of the political science shelves or that our eyes will go bad from looking at too much Matisse. We will not even have to buy a cup of coffee to buy time on the sofa. In its bazaar of books, a library offers public privacy even as it spills the infinite supply of ideas on the countertop. Before there were hot links and search engines, there was the serendipity of shelving, the chance encounter with an undreamed-of work, the accidental reunion with a mislaid author, the passage from topic A to topic Z that happened routinely in libraries because a binding caught an eye or because one wanted to see what an attractive reader in the next alcove had found so fascinating. Serendipity is still the rule in libraries, where fiction is two steps from biography. For all but the most unimaginative or intolerant, those serendipitous encounters matter in a way that Google ranking does not.

Beat that, Steve, Jeff, and Bill.