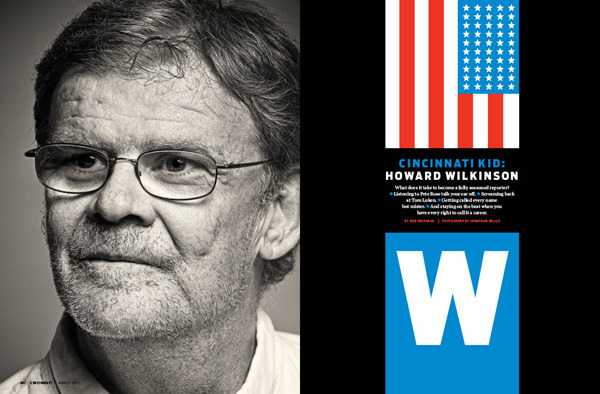 Howard Wilkinson spent his childhood in Dayton convinced that Cincinnati was the happiest place on earth. “There were only three things I knew about Cincinnati: Crosley Field, the zoo, and Coney Island,” he says. “I thought this was just a magical place.” Now 59, Wilkinson has as good a view as anyone of the less magical sides of the city, having covered and studied politics on the local, state, and national levels for 30 years from his perch at The Cincinnati Enquirer. As reporters go, that’s definitely long enough to qualify as “fully seasoned.” He expresses no regrets for having declined job offers in Washington and elsewhere. “I spent basically my adult life learning the politics of this state, so why leave it?” In April, Wilkinson took an early retirement offer from the Enquirer and quickly accepted a new job at WVXU, the NPR affiliate, where he writes a political blog (Inside Pitch) at WVXU.org, chats about the week in politics with news director Maryanne Zeleznik every Monday morning, and regularly appears on Zeleznik’s Impact Cincinnati public affairs program on Thursday mornings. It may not have been a predictable career move, but it keeps him on the beat he knows better than any other reporter in town.

You were an ink-stained wretch reporting from The Cincinnati Enquirer newsroom for nearly 30 years. What’s it like to wake up and head to a radio station instead? It’s different and yet it’s the same. Journalism is journalism. You’re going out looking for stories, writing stories, telling stories.

It did my heart good to hear that you were staying in journalism and moving over to WVXU. Are you excited about your new gig? Yeah, it’s fun. If you told me six months ago I’d be working in public radio, I would have thought you were insane. But here I am.

Are the station and your blog effective ways to get the news out? WVXU and WMUB [WVXU’s partner station in Oxford] have a quarter of a million people listening. It takes me back to my days at Ohio University when I was a freshman, sitting in the dorm room in Washington Hall with my little radio listening to WOUB. There was a new show on at the time called All Things Considered, and I thought, Wow, this is pretty good. That got me hooked. For all the years I worked in the newspaper business, I would listen to NPR in the morning on the way in, and I’d listen to it on the way home.

Which stories stick with you as you look back on your career? Politics is one part of it. You go back to the Lucasville prison riots, the Air Canada jet crash, the savings and loan crisis in ’85—those were all big stories. But the ones I’ll always remember are those personal stories, like a Mariemont man in his 80s who bags groceries just to have something to do. I wrote his story about being part of the liberation of Paris [in World War II] and all of these people who knew him at the Mariemont Kroger looked at him through a different set of eyes—with respect. It changed his life.

What were your least favorite topics to cover?  I’ve never particularly liked doing what I call “covering buildings,” like City Hall or the county courthouse. I’m not a meeting type of guy. I’d rather go out and find stories.

Watching the sausage getting made at those meetings can be painful.  It can be mind-numbing. I mean, somebody’s got to do it.

What qualities do the best politicians share? There are two types: There are those who have no filter between their brains and their mouths. They make good copy. On the other hand, there are politicians who are extremely self-controlled. They’re very measured and they think before they speak. [Senator Rob] Portman is a good example of that. He’s one of the most disciplined politicians I’ve ever seen.

You never see a gotcha story about him. He’s never off-message, he’s never off his script. He knows exactly what he wants to say and what points he wants to make. It’s like covering baseball players. Some are like Pete Rose, others are like Joey Votto. Votto is a very controlled person. He doesn’t speak a lot and when he does he has something to say. Pete, on the other hand, will talk to anybody, anywhere, and never stop talking. If you run out of questions, he’ll ask you “What else you got?” Politicians can be like that, too.

I would imagine you’ve been accused of bias by people along the whole political spectrum anytime you wrote something they perceived as negative. I’ve been called every name but mister.

So how do you set aside your opinions of people and issues to report objectively?  It’s not my job to try to spin a political story, or an election for that matter. People who read this stuff are smart enough to make up their own minds. I’m the recording secretary who is going to write down whatever Politician A says. If he contradicts something he said in the past, I’ll point that out. That’s not biased. That’s putting things into context.

Did politicians ever try to bully you into writing a story a certain way? They don’t necessarily bully you, but there were some who were famous for testing how far they could push you. [Former congressman and mayor] Tom Luken was a master. Every time a new reporter would come along, he would get on the phone with them and start screaming and yelling about nothing in particular. He was just trying to put the fear of God in you. I figured him out very quickly. So I started giving it back to him. He and I used to have these shouting matches over the telephone, him in Washington and me back here in Cincinnati. I think he ended up having a lot of respect for me, and me for him in the end.

How so? When I started, you had Democrats on one side and Republicans on the other. They would argue the issues all day long, but at the end of the day it was all over. It was like the old story of Ronald Reagan and Tip O’Neill. They would call each other names all day long for the national media, and then in the evening, Tip O’Neill would take his limo down to the White House and they’d sit there and drink Scotch all night. Now it’s like blood sport, and no one gives any quarter. When things become that ideological, that rigid, then of course nothing is going to get done.

Is it the rise of the Tea Party that’s primarily to blame for that rigidity? No, it’s both sides—the Left and the Right. It’s people talking past each other. And a lot of this is fed by the cable news networks with the talking heads, who keep those fires burning.

They find the biggest flame-throwers…  And they put them on, the guys with the biggest mouths. And the politicians, the guys in Washington who are in leadership positions like [House Speaker John] Boehner and [Senate Majority Leader] Harry Reid, almost feel like they have to follow suit and be tough guys, too. That’s how you end up with gridlock.

Can the pendulum swing back somehow? [Long pause] It’s going to take something cataclysmic, I think, to bring these people together again. Maybe something so serious that it threatens the security, the economic existence, of this country.

OK, then how about we talk about some good news. This conversation is taking place in early summer, and the Reds have been rolling. How did they become your passion, as opposed to the Bengals or high school football or college basketball?  As a little kid, I played the game. To me, it has just always been the greatest game of all. I naturally grew up with the Reds in Dayton. College basketball I pay a little attention to, but that’s something to pass the time until spring training.

You’ve written a lot about the Reds over the years. Editors would always call on special occasions. Big stories like when Ken Griffey Jr. came. I was involved in covering the Pete Rose gambling scandal back in the ’80s.

When you’ve covered the Reds, have you been able to maintain your professional decorum?  No. [The editors] didn’t expect me to. I could let loose. I can’t do that with politics. But with baseball, they would just let me go and write about the beauty of the game, the Reds, my own feelings about them, with absolutely no pretense of objectivity whatsoever.

You and Mike Keating [a former Enquirer photographer who retired at the same time as Wilkinson] threw out ceremonial first pitches in May. That was pretty special. I have this bum shoulder that I got when I was coaching Knothole League. So I was working on that shoulder for a month so that I could get that pitch up there. To walk into the middle of a Major League ballpark with three decks…that was pretty amazing.

I haven’t seen the video. Did you get it over? Yeah, I got it over. When I let loose, it looked like it was going to be straight as a string. And it was over the plate. But at the end, it dropped. It went way down out of the strike zone. [Enquirer reporter] John Kiesewetter got it right off the dirt. It was the kind of pitch Drew Stubbs would have swung at.

Originally published in the August 2012 issue
Photograph by Jonathan Willis