Home Longform “C” Is for Cycle 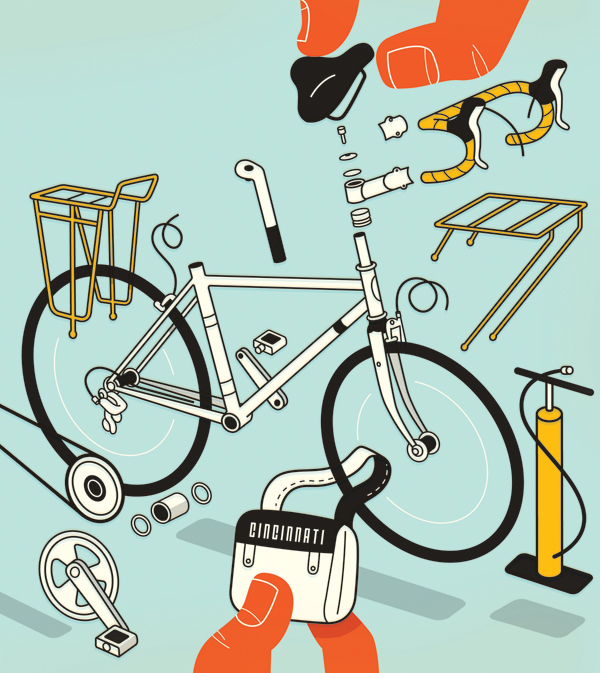 I’ll be up front: I like bikes. I’m not a fanatic—I don’t have clip-in pedals, aerodynamic shades, or padded shorts—but I cycled everywhere before I bought my first car, at age 25, when I was moving from Montana to Cincinnati. My bike is a 1991 Giant Sedona. It probably couldn’t fetch $50 on Craigslist, but it’s dear to me. So when my fiancée and I packed the car for the 2,200-mile cross-country drive, I made sure it was strapped tightly to the back.

My first impression of biking in Cincinnati was that if I did it often, I would die. It seemed only a matter of time. Bike lanes were scarce, the roads narrow, and the cars wide. When I asked around, the opinion was almost unanimous: Cincinnati was not a bike-friendly place. So we explored our new city by car, and I hauled my bike up to the attic, where the tires went flat from sheer depression.

Two years later, I began to reconsider. My fiancée needed the car more, and I missed my old two-wheeled freedom. So I dragged my Giant downstairs, took it to Reser Bicycle Outfitters for a tune-up, and tentatively started biking to work. The first rides were tense. I was crossing Gilbert Avenue once when a turning car screeched to a halt five feet from my front tire. I retreated to the sidewalks until a downtown cop threatened me with a ticket. But every repetition taught me something new. I grew more familiar with my route. I  became more intuitive in traffic. And I think the cars adapted to me, too. I’m still vigilant, but now I can cycle from Covington to Norwood several times a week without once fearing for my life.

I’m not alone. In a recent census, 326 cyclists were spotted over a two-hour period at 18 locations across the city, up from 291 in 2010. A survey of 590 Cincinnati cyclists found that 78 percent ride more than once a week; 70 percent of those trips are six miles or longer. Still, in terms of bike-friendliness, the cyclists graded Cincinnati a “C” for the third straight year.

“It’s probably what we deserve,” admits Michael Moore, director of the city’s Department of Transportation and Engineering. “If a child brought that report card home, I wouldn’t be very happy with it. But considering where we’ve come from…” He trails off. Where we’ve come from, precisely, is 1976, the year the city’s last bike plan was implemented. “It’s a nice historical document,” he says, but it only addresses recreational biking. In 2010, Moore adopted the Bike Transportation Plan, a commitment to cycling that earned Cincinnati a bronze-level Bicycle Friendly Community award from the League of American Bicyclists.

Moore says his staff thinks about bikes with every project they undertake. According to that recent survey, 85 percent of cyclists said they would ride more if there were more bike lanes. Cincinnati currently has a paltry 8.3 miles of them, plus 4.9 miles of “sharrows,” markings that remind cars to share the road. “We’re a little behind on where I’d like us to be,” Moore says. But more bike lanes would mean less curbside parking, which upsets drivers. “You try to achieve a balance between all the needs and all the users,” he says. “It does take a whole lot of community engagement.”

Cincinnati is fortunate in that regard, Moore says. His department collaborates with outspoken bike advocacy groups like Queen City Bikes and MoBo Bicycle Co-op in Northside. “We don’t have a huge cycling community,” he says, “but we have an excellent cycling community.”

A recent addition to that community is Jared Arter, a long-haired 25-year-old who moved here from Chicago this spring to manage the new Cincinnati Bike Center in Smale Park. The CBC is the third such center in the country, after Chicago and Santa Monica. For $150 per year, $25 per month, or $2 per day, members get access to secure bike storage, showers, lockers, and an on-site bike mechanic. The center also offers bike rentals, Segway tours of the city, and valet bike parking during Reds games.

Standing in the cool bike vault beneath Smale Park, Arter says the center’s mission is simple: “If you offer people a bike and the support, they’ll bike again,” he says, channeling Field of Dreams. “It’s fun to be out there.” Arter commutes from Norwood on an emerald 1973 pro-level racer, his second of 14 bikes. He enjoys the light traffic here, but is still adjusting to the poor infrastructure—and the hills. “Coming from Chicago,” he says, “these things are kicking my butt.”

Even so, Arter loves bikes. To him, they are “rad,” “pretty awesome,” or, in the case of my Giant, “bomb-proof.” “There’s such a joy in cruising around and being self-sufficient,” he says. “It puts me in a different state of mind than when I drive.” And it’s a thrill everyone can experience. “You don’t have to be the freak in spandex shaving your legs,” he says. “You can ride downtown two days a week and still save money and have fun.”

One of the bikes in the racks is a titanium Lynskey R230 that belongs to Tom Kahle, a partner for the law firm Baker & Hostetler. One of the center’s first members, Kahle rides twice a week from his Pleasant Ridge home to his Scripps Center office, 11 miles each way. He’s happy he can lock up his bike while he’s working. “When the Bike Center opened and you could store your bike there and go in and out, it made things ideal,” he says. “It was just what needed to happen.”

Kahle’s commuting raises some eyebrows around the firm. “I think people are a little surprised when they first hear about it,” he says. “Most people think that it takes a lot of effort or it’s a little dangerous. But when you sit down and explain it to them, and tell them about the Bike Center, people say, ‘Oh yeah, I get it.’ It’s a whole lot less unusual than it would have been years ago.”

Kahle has lived here for 37 years and cycled for nearly 20. He’d like more bike lanes and connectivity to the bike trails outside of town, but he’s noticed biking conditions improving. “Cycling is a much bigger part of this community,” he says.

He’s right. More people than ever are cycling in Cincinnati and the bike infrastructure is improving, however slowly. Now the city just needs to do its homework, and keep pedaling, to pull its grades up next year.

Flesh Wound
Michael Moore hasn’t attempted a bike commute since a mishap in Raleigh, N.C. He put his tire in a sewer grate and flipped. “When I walked into work, they thought I’d been mugged. My shirt was torn. There was blood pretty much everywhere.”

Bona Fide Biker
Arter has been doored by a cop, spent a winter as a Jimmy John’s bike deliveryman, and carried a pair of panties across Chicago as a bike messenger. (He didn’t ask.)

Habit Making
Moore hopes people will choose their bike rather than their car for everyday errands like running to UDF for a quart of milk. “You have to generate a cultural change,” he says. “It just takes time to
do that.”

Dutch Dreams
The Netherlands has great bike infrastructure, Arter says. “They have parking garages for bikes. You can’t remember where your bike is. There are that many. It’s crazy.”

Illustration by Harry Campbell.
Originally published in the August 2012 issue.