Home Perspectives Editor's Letter Letter from the Editor: May 2016

The call came out of the blue, like some of the best ones do. The guy on the other end of the line said his name was Bob Woodiwiss, that he’d sent me a copy of his book, and was interested in doing some writing for us. This was a couple of years after I’d stepped into the editor’s job. One of my prime directives was to inject more humor into the magazine, and Bob knew how to write funny, but funny with a sharp edge. Having grown up in Cincinnati, and attended school here, and ground out a career in advertising, Bob had a distinct sense of humor about his (our) state of existence. Another way to put it is: His soul had not yet been crushed, and he was fighting valiantly, mano-a-mano, to avoid the crusher. His weapon of choice? Satire.

His first piece appeared in July 2006. Playing off of an actual press release about a “Take Carson Palmer to School” contest, Bob confected some fake news blurbs for school visits perpetrated by other local luminaries. I knew we were off to a good start when he imagined Phil Burress, the leader of Citizens for Community Values, “putting pants on Jake, the ‘naked’ biology class skeleton” at Cincinnati Hills Christian Academy. Six months later, Bob took up residence on our back page where he proceeded to pump out 72 consecutive installments of The Last Detail. He had his fans and his detractors. More than once we got a letter demanding Bob’s head on a pointed stick—a good sign!

When he shifted from the back page to the front to write The Observer column, he was able to stretch out a bit and craft personal essays on subjects as wide-ranging as his battles against weight-gain and the inanities of marijuana legalization. The reactions toned down. A bit. I wish I’d saved the two-minute-long artillery barrage one person left on my phone after reading Bob’s barbed appreciation of the many hours he’s spent grocery shopping at the Kroger in Hyde Park Plaza. Instead I’ll quote one of my favorite sentences from that column (March 2015): “Sizing up the lines at the checkout lanes, our mission accomplished, I often wonder: Does anyone else hear ‘Taps’?”

This month, we play “Taps” for The Observer. I’m sad to see it go, but I understand: Bringing the funny and speaking the truth every other month is hard work. Bob says he wants to keep writing for us, though. So all you haters out there can rest easy. He’ll be back. 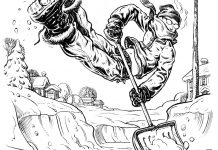