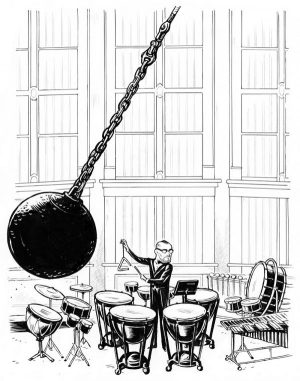 As Music Hall closes for renovations amid a chorus of voices screeching You’re doing it all wrong! I wondered: What arguments happened during previous renovations? I’m sure they were just as loud.—AL LEGRO

Dear Al:
You are incorrect. One argument, in 1937, was much louder than any other: “Evacuate Music Hall now and demolish that firetrap before it explodes!”

Building Commissioner Clifford Stegner pulled no punches. His inspection report warned: “This venerable and dearly beloved structure is primed for a blast that may rival the Hindenburg zeppelin explosion,” which occurred only a week earlier. Over the past 60 years, he said, a full inch of dust had collected in Music Hall’s expansive roof. A single spark could trigger an explosion that would drop tons of debris onto the audience (whose final thoughts could have been that this season’s 1812 Overture finale was perhaps a bit much). Countless other dangers throughout the facility, he declared, made demolition the only option.

The issue, however, was not that simple. Mr. Stegner’s report may have been less than objective. Various Cincinnati constituencies were competing to force Music Hall into a major overhaul, or to even be replaced by one of those new “convention centers” that other cities were building. Fortunately, short-term fixes combined with long-term renovations saved the facility and everyone’s agendas. The new-and-improved Music Hall officially celebrated itself on October 17, 1941. At last, everyone could relax. Seven weeks later, Pearl Harbor was bombed.

The Mellow Mushroom pizza joint in Hyde Park has a large mural honoring Cincinnati’s King Records. It shows James Brown, obviously, but there are four other performers that I didn’t recognize. Nobody on staff had any information. Can you help me out? —MELLOW MURALS

Dear Mellow:
The Doctor is at your service, especially when a meal can be written off. Mellow Mushroom’s food and service were excellent, but the mural’s ingredients were, indeed, incomplete. The restaurant’s customer feedback page includes topics like “burnt food” and “wait time” but not “those mystery dudes on the wall.”

To James Brown’s right is Cowboy Copas, a country singer whose career was going fine until the day he joined Patsy Cline on her final flight. To Cowboy’s right is the original “Gangster Of Love,” Johnny Guitar Watson, a virtuoso show-off who inspired many of Jimi Hendrix’s antics. On Brown’s far left is Moon Mullican, the king of rockabilly, a decade before that word was coined. He is beside Hank Ballard, who wrote and recorded a song called “The Twist,” only to see Chubby Checker’s version become a worldwide craze. James Brown aside, that’s the story of many King Records artists: paving musical roads others cruised to bigger fame. Check, please.

I got into an argument with my sister, and we decided it was about something trivial enough to be settled by the great Dr. Know. Of the many songs about Cincinnati, which one has been recorded by the most people? —QUEEN CITY DITTY

Dear Ditty:
First, the Doctor humbly accepts your honorific as First Source for Inconsequential Information. Second, this topic requires boundaries. No sports team anthems, alma maters, or TV themes. Recorded by the most people excludes cringe-worthy YouTube performances, or even tolerable ones. We’re talking only about commercially released songs.

And the answer is rather embarrassing: At least 13 versions exist of a wretched but substantial hit song from 1950 called “Cincinnati Dancing Pig.” This musical horror (“Cincinnati Dancing Pig…he’s the barnyard Mister Big”) arrived during the period between the decline of the big bands and the rise of rock and roll, a time when America suffered an avalanche of cutesy-poo juvenile novelty songs.

This was also a time when popular artists were obliged to record their own versions of whatever was hot, so when country singer Red Foley’s rendition charted at Number 7, this song was forced upon such mainstream musicians as Vic Damone, Tennessee Ernie Ford, Gene Krupa, Hoagy Carmichael, and Teresa Brewer. Ms. Brewer’s version is notable for its group chorale spelling out “Cin-cin-nat-ti” with two T’s, an insult lost amid the greater disgrace of the song itself.

Dr. Know is Jay Gilbert, weekday afternoon deejay on 92.5 FM The Fox. Submit your questions about the city’s peculiarities at drknow@cincinnatimagazine.com