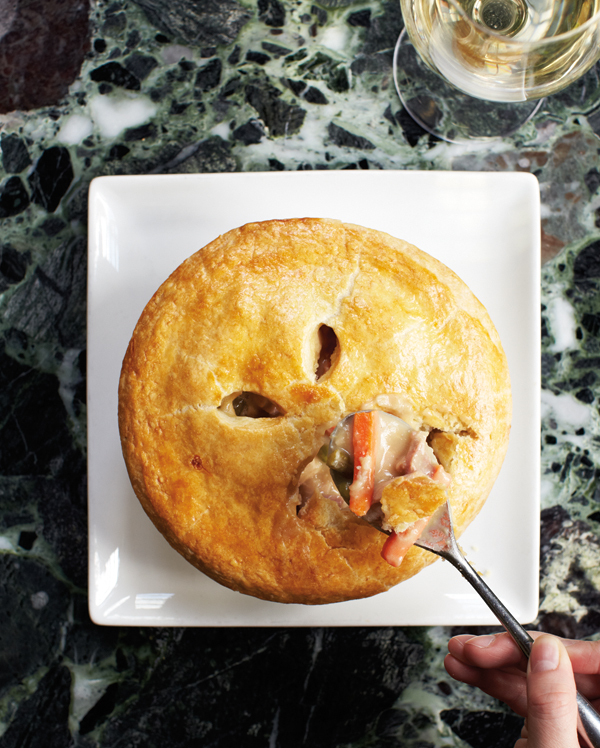 Walnut Street Grill has a prize address. It’s smack in the middle of the downtown area that has been trying to brand itself as the arts and entertainment district since the Aronoff Center put down roots in 1995 and the Contemporary Arts Center moved into its new home in 2003. This is the second incarnation for the two-story restaurant owned by Jeff Ruby; in its short-lived first life, it was known as Bootsy’s Produced by Jeff Ruby (although no one but the unlucky person who answered the phone there ever called it anything more than Bootsy’s). That iteration was a partnership of sorts with Bootsy Collins, featuring a ground floor quasi-museum stocked with memorabilia from King Records and the grandmaster funkateer’s personal collection. Upstairs, the dining room was just this side of a psychedelic dream, awash in candy colors and appointed in a highly stylized mashup of rock and roll icons, Alice in Wonderland, Victoriana, and Arabian Nights furnishings.

As in most Jeff Ruby restaurants, there was a clubby DJ-driven lounge and bar area, private dining, and a small, luxurious bottle service room in addition to the main dining room—which, due to the building’s layout, was largely obscured by a wall and therefore seemed secondary to the bar scene. The menu was no more straightforward: Hispanic specialties, tapas, sushi, pasta, seafood, chops, and steaks all clamored for recognition. Some got more than others. Though the hallmark Ruby hospitality was evident, the restaurant wobbled between to-funk-or-not-to funk, and instead tried casting its net wider to be all things to everyone. Three chefs and not quite two years later, Bootsy’s closed. Six months after that, it was reborn as Walnut Street Grill, and except for its faint southern drawl I’m not sure it’s any more clear about what sort of restaurant it wants to be.

Walnut Street Grill’s location is also a double-edged sword. While an increasingly crowded arts and entertainment district has the potential to fill seats, the growing number of neighboring bars and restaurants means competition for your dollar is keen. Any establishment that wishes to be profitable has to be focused and driven.

The restaurant, marked by its glass elevator and second story patio with a line-drive view of Walnut Street, is flanked by bars: Scene and The Righteous Room on its left; to its right the kilted Nicholson’s Pub. Just down the block, the much anticipated 21c boutique hotel with its art driven, award-winning restaurant Proof is currently under construction and scheduled to open in late 2012. At about the same time, Boca Restaurant Group will open the doors on two Italian / Mediterranean restaurants in the former Maisonette site around the corner (their mothership restaurant, Boca, now in Oakley, will occupy one floor). Bartini’s, Mr. Sushi, and Trattoria Roma are the first residents on the ground floor of the 580 Building, where developers are hoping to build a Restaurant Row. A slight half block south on Walnut Street, Nada (also brought to you by Boca Restaurant Group) slings very good margaritas and tacos to throngs of very pretty people, while the same distance north, Jeff Ruby’s Steakhouse has cornered the pleasure principle market with two-fisted Manhattans and expensive, dry-aged steaks.

Therein lies the irony, because if anyone has shown the generation of restaurateurs whose establishments surround Walnut Street Grill what it means to build and brand an identity, it is Jeff Ruby. So why does it feel like his 9-month-old restaurant is in the throes of an identity struggle?

Walnut Street Grill replaced Bootsy’s street level museum with a woodsy full-service bar fronted by a garage door that rolls up to integrate the street scene, weather permitting. Upstairs, a wall has been cut to bring the large, open dining room more into view, and with the exception of the blazing bright red and green tiles in the open kitchen, the interior palette is toned down from pop-art colors to richer, earthier tones. Gone is the wall of Rolling Stone covers and the clubby lounge furniture. Where Bootsy’s rock icons once hung, the signature Jeff Ruby celebrity gallery of 8 x 10 glossy photos has moved in, and comfortable booths for dining clearly indicate the club kidz aren’t going to be grinding out the late night in Walnut Street Grill’s bar area. Trying to connect the dots of the rather prosaic patchwork of interior space is the menu—more cohesive in its comfort food theme than the multiple culinary personalities of Bootsy’s, but still reading as if there are too many cooks in the kitchen.

The menu for the most part was designed by Chef Jeremy Lieb, a wunderkind who spent five years at Maisonette with Jean-Robert de Cavel before leaving Cincinnati and working his way through kitchens at Daniel Boulud’s Restaurant Daniel, Le Cirque Las Vegas, and his own Trois in Atlanta. But a week before Walnut Street Grill opened, Lieb left the restaurant for the Boca Restaurant Group. An interim chef managed the kitchen until August, when Chef Tony Efstratiadis—who had worked at Ruby’s Waterfront for a couple of years—stepped in.

The best of the menu is the section titled “from mom’s kitchen.” For their humble pedigree, many of the dishes have no less potent appeal than the $50 hand massaged steaks down the street.

The chicken pot pie is outstanding—a pie chickens themselves would sanction—with large pieces of tender meat, potatoes, green beans, carrots, and peas enrobed in silky gravy and tucked under a flaky, buttery crust. Short ribs braised in port wine and served with roasted potatoes, carrots, and celery is Sunday supper comfort at its best, the custardy square of Kentucky cornbread…perfection. We added the steak burger to our list of favorites in the city, and vowed to come back for the cornmeal crusted catfish with grits and red-eye gravy again.

If the menu could stay tight and focused on these classic homespun elements, it would have a distinct voice in the neighborhood and (hopefully) be able to hold its own.

But things begin to go sideways with appetizers that are better designated for bar food, main courses such as pasta primavera and grilled mahi tacos that veer off course with a limp, and in case you did not know this was a Jeff Ruby restaurant, steaks. Six of them (plus the steak and cake). Why? One or two, sure. In the comfort food hall of fame, not much beats a really good steak and potato. But why create an auxiliary steakhouse with familiar sides when the best steakhouse in town is less than half a block away? (In case you think there’s a significant price difference, think again: the Freddie salad differs by one dollar; WSG’s $30 New York strip steak is 12 ounces, while JR’s 14 ounce strip is $38).

The menu could use some feng shui. Trim it down from 45 items, and let a chef who cooks with poetry and passion knock out a focused menu of simple dishes with vibrant flavors made from top notch ingredients. Walnut Street Grill is surrounded by restaurants that know their voice. And more will be opening soon. To stay in the mix, I hope WSG finds its own voice. Mom would want it that way.