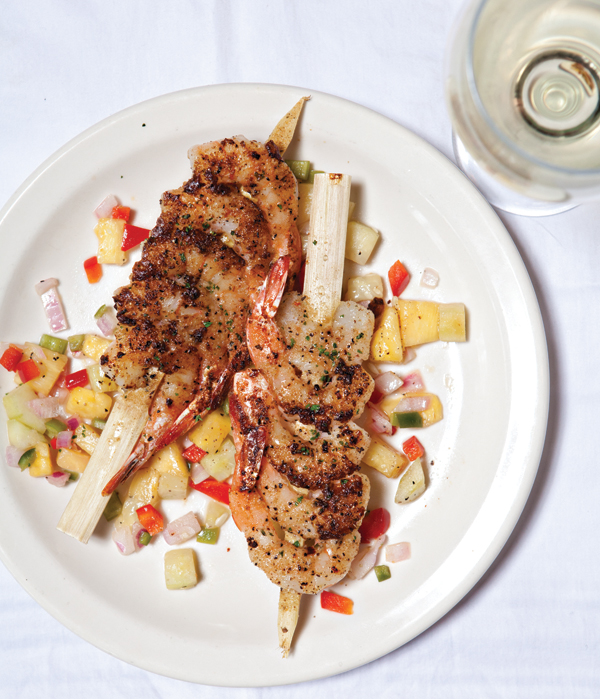 I am not a fan of neighborhood-style restaurants like TGI Friday’s or Ruby Tuesday. Perhaps it’s because I was once mistaken for a woman at the latter (I hope it was the long hair). So when I was assigned to review Copper Blue—a restaurant that shouts neighborhood-style with its slogan A Grub Shack!—I tried to hide my disappointment. Thankfully, Copper Blue exceeded expectations. No, they don’t serve quart-sized draft beers, but they do have a good selection from Mt. Carmel and 21st Amendment. The BBQ Cajun shrimp is satisfying if a little skimpy on shrimp, its grilled bread the perfect delivery system for the homemade sauce; and the black bean dip (with corn, cream cheese, tomatoes, red onion, and jalapeño) has just the right amount of kick. With the exception of the bratwurst burger—which comes topped with hot onion slaw, a melding of German tradition and American desire for meat on a bun—the entrées aren’t necessarily inventive. But you don’t go looking for culinary innovation at a grub shack; you go looking for quality. And Copper Blue delivers. The classic burger is good and messy, the Buffalo mac-and-cheese is served in a sizeable portion, its tender chicken deliciously doused in all that mac. Both the fish tacos (with sweet slaw) and the cod sandwich (with chipotle tartar sauce) stand tall. And with the drunken carrot cake volcano, this grub shack saves its best for last. The ultra-moist carrot cake is topped with vanilla ice cream and a Woodford Reserve icing that blows chain desserts right out of the water.

Originally published in the December 2011 issue