Long Haul: Shenandoah National Park
Spring awakens dramatically at Shenandoah National Park in northern Virginia, a roughly seven-hour trip by car. The protected wilderness, which stretches over eight counties for a total of 197,000 acres, is home to 850 species of flowering plants, 70 percent of them native. Get there by mid-May—before the canopy leafs out and the forest floor is still dappled with light—for the biggest variety of woodland beauties, including pink and yellow lady’s slipper orchids, bloodroot (from the poppy family), and large-flowered trillium. Hone your identification skills during the park’s annual Wildflower Weekend (May 9 & 10), two days of naturalist-led hikes and workshops.

Stay in the park’s own resort, lodge, or cabins for easy access to 500 miles of trails, streams teeming with brook trout for fly fishing, and 15 waterfalls (Overall Run Falls has the tallest drop at 93 feet). For a hike back in time, walk the four-mile round trip to Rapidan Camp, Herbert Hoover’s presidential retreat. Three original buildings still stand and are open to the public during ranger-guided programs. Even leaving is pretty: Skyline Drive, the park’s only public road, extends 105 miles and has 75 overlooks where you can take in one last view. Shenandoah National Park, nps.gov/shen

Day Trip: Yellow Springs
Up in Yellow Springs, you can take your pick of three parks to hike in search of seasonal blooms. Scan ground level for patches of Virginia bluebells at Clifton Gorge State Nature Preserve, a 268-acre national landmark recognized for its dolomite and limestone gorges. The gorge extends to John Bryan State Park, adjacent to the preserve. More than 340 species of flowers grow in the park, including Dutchman’s breeches, identifiable by stocks of nodding white blossoms; jack-in-the-pulpit, with striped bracts that look like cobras about to strike; and columbine, whose dangling pink and yellow flowers attract hummingbirds.

Head into town for lunch at Ye Olde Trail Tavern (serving pub fare since 1847) and a stroll through Glen Helen, a 1,000-acre preserve managed by Antioch College. Here, 69 species of flowering plants have been identified. The rare white snow trillium has already come and gone, but other white varieties thrive this time of year, including large-flowered and nodding trillium. Native black raspberry shrubs, which flower May through June, are also abundant in the glen. John Bryan State Park, parks.ohiodnr.gov/johnbryan

Weekend Stay: South-Central Indiana
From late April to early May, wild hyacinth blooms densely in the southwest corner of the Charles C. Deam Wilderness, located in the northernmost part of Indiana’s Hoosier National Forest, near Bloomington. Unlike the cultivated grape hyacinth, this wild lily has wispier petals and a softer lavender color. If you can’t make it to the forest now, plan for July, when prairie wildflowers peak.

Nearby Brown County State Park has hosted an annual Wildflower Foray since 1986. This year’s three-day event (April 24–26) includes guided hikes and a boat trip through the backwaters of Lake Monroe. You’ll also get a checklist so you can log your sightings. It catalogs 216 species of wildflowers, vines, and shrublets (woody species commonly mistaken for flowers) that have been spotted here before—such as six varieties of yellow buttercups, white forget-me-nots, and pink and purple wild geranium, whose five-petal blooms first open in early May. Near the park is the Brown County Artist Colony, established circa 1907 by American impressionist painter T.C. Steele, an Indiana native whose home is now a historic site. The colony is anchored in the village of Nashville, where accommodations abound. Brown County State Park, in.gov/dnr/parklake/2988.htm 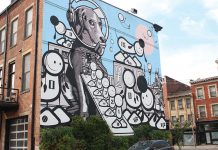