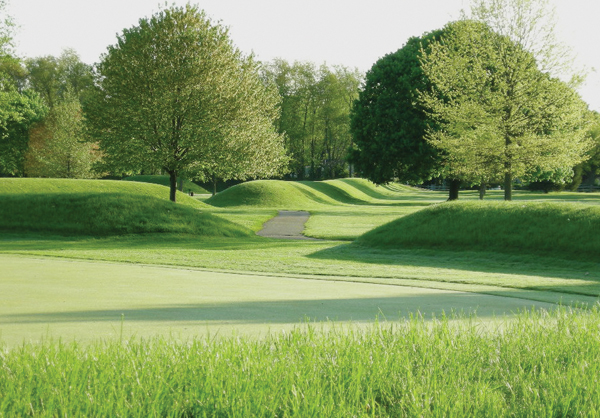 For people who enjoy and appreciate the outdoors but would rather sleep on a mattress than on a bed of bugs at a campsite, visiting moundbuilder sites is the right kind of earthy getaway. With the help of our own personal earthworks expert, John E. Hancock, professor of Architecture at the University of Cincinnati, we’ve put together a collection of sites worth seeing. Hancock was instrumental in creating the itinerary provided at ancientohiotrail.org. While we recommend you bring it along, we propose you occasionally veer off the trail and let curiosity guide you. Ohio’s earthworks are best experienced by simply meandering through them on foot, allowing time to appreciate and take in each tiny little detail.

“The Ohio Earthworks constitute the most elaborate, complete, coherent, and typologically diverse collection of monumental earthen architecture in the world,” says Hancock. “Each of these unique architectural masterpieces represents a complex sophistication.”

Flint Ridge State Memorial
According to Hancock, the “beautiful, hard, sharp, and rainbow-colored” flint was used for weapons and tools and was also traded for more than 10,000 years by the ancient Ohioans. Explore several miles of quarry pits and workshops where you can see the effort and labor used to remove the flint from the earth. Cool off by walking under the giant canopy trees in the hardwood forest. Then visit the Museum at Flint Ridge, which sits upon a restored prehistoric quarry pit, to learn about the digging and shaping of flint from modern expert flintknappers. Maybe treat yourself to some locally manufactured flint jewelry, too. Just up the hill from Roscoe Village in nearby Coshocton, the Apple Butter Inn (applebutterinn.net, 740-622-1329) helps you keep the pace slow with a front porch that’s perfect for rocking. The Warehouse Steak n’ Stein restaurant (warehousesteaknstein.com, 740-622-1329), where you can indulge in a plate of their trademark onion rings, is just a block away.

Newark Earthworks
Made up of circular and octagonal shapes, the Newark Earthworks have hills and dips and lengthy lines, much like those at Serpent Mound, arguably Ohio’s most well-known earthworks site. According to Hancock, The Great Circle enclosure is “the largest monumental portal ever made by the Ancient Ohioans.” In the center of the circle you can see the appropriately named “Eagle Mound,” a memorial built over the remains of a long, timber-framed building with two “wings.” Also part of the Newark Earthworks is the Octagon, which may be the most astounding of the surviving works due to its amazing astronomical properties. A stay in the village of Granville at the Buxton Inn (buxtoninn.com, 740-587-0001) will provide rest and sustenance (the tavern serves up everything from roast duckling to eggs Benedict) to even the most weary earthworks walker.

Marietta Earthworks
The focal point of the Marietta Earthworks is easy to spot: it’s the Conus mound—located at the corner of Fifth and Scammel Streets in downtown Marietta—marked by the still intact and visible ditch-and-ring design. Nearby, a patch of thickly planted flags signifies several graves of Revolutionary War Veterans. Make sure you save enough daylight to explore the Capitolum Mound—which is now a platform for the Washington County Public Library on Fifth Street near Washington—and Quadranaou Mound, which is preserved in a park farther north on Warren Street between Third and Fourth. Then finish off with a stroll along the broad ancient ceremonial way, Sacra Via. The Lafayette Hotel (lafayettehotel.com, 740-373-5522), an early 20th century high-rise on the riverfront, makes for a relaxing place to lay your head. Enjoy locally made Rossi Pasta at The Levee House, on the riverfront (127 Ohio St., 740-374-2233).

Mound City Group
Mound City, just a few miles north of Chillicothe and visible against a backdrop of forests, river, and prominent hills, is made up of 23 unique mounds and an enclosing wall. Each mound covers the remains of a funerary or ceremonial building, but excavations have exposed some noteworthy ornaments such as effigy smoking pipes and sheets of mica. The Mound City enclosure “was likely a prototype for the more precise and complex geometric figures of later Hopewell-era monuments,” says Hancock. Be sure to begin your tour at the Visitors Center of Hopewell Culture National Historical Park, just north of town on State Route 104. The stately Atwood House Bed-and-Breakfast (chillicothebedandbreakfast.com, 740-774-1606), offers a Greek revival–style home base. (It was built in 1843.) It’s a good idea to venture out to Water Street to feast at the Old Canal Smoke House (oldcanalsmokehouse.com, 740-779-3278). Choose from a variety of different meats that have been smoked on the premises and take home bottles of their unique sauce. Trust us, you’ll want to keep that stuff on hand.

Originally published in the May 2012 issue.