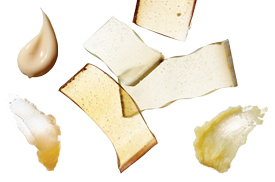 In 2005, four years after moving to Cincinnati for a job in nuclear medicine technology, Sebastian Rey developed multiple, devastating food allergies. Already slim, Rey lost 30 pounds; he struggled to find food to eat and had allergic reactions to soaps, lotions, and shampoos. Rey’s first doctor wanted to medicate him, so Rey went in search of alternative therapies. Eating organic, nutritious foods seemed to stabilize his condition, and a new doctor had a challenge for him. “He said, ‘You have a background in chemistry,’” Rey recalls. “‘Why don’t you make your own skincare products?’”

By 2008, Rey was experimenting in the kitchen of his downtown loft, trying to perfect formulas for several products using organic ingredients like honey, coconut oil, and oatmeal. The trial-and-error phase included plenty of errors: soaps that wouldn’t hold together, lip balms that were too soft. But as his products improved, friends started asking for them. Now the line, Skin Awareness by Sebastian Rey, has eight products, including facial bars, toner, moisturizer, and skin scrub.

Rey still holds a day job working with cancer patients at University Hospital, but he spends many of his weekends mixing products for his line. He’s transformed half his loft into a production facility using hospital-grade sterilization techniques. Skin Awareness products are available at Posh Boutique in Hyde Park and Inner Peace Holistic Center downtown, as well as on his website (sebastianrey.com).

Rey envisions a day when he can quit his day job and concentrate full-time on his skincare line, but for now he’s content to be healthy and busy. He regained the weight he lost and his health has improved so much that he hasn’t had a cold in six years. That he also gained a business as a result of his illness is a happy bonus. “When I saw my health come back,” he says, “I knew that everything was going to be OK.”

Originally published in the May 2012 issue.