Every couple of years, it seems, someone decides that Cincinnati needs a slogan. There is a certain hubris to this urge, since everyone who puts pen to paper (or keyboard to electrons) in praise of Cincinnati lays claim to outdoing Henry Wadsworth Longfellow who, in 1854, wrote the eternal lines of the closing stanza of his poem “Catawba Wine”:

And this Song of the Vine,

This greeting of mine,

The winds and the birds shall deliver

To the Queen of the West,

In her garlands dressed,

On the banks of the Beautiful River.

Not to mention the slogan or motto prominently displayed upon the seal of the city: Juncta Juvant. This Latin slogan is translated in various ways but is perhaps most accurately as “Things joined together are helpful.” If this is somewhat less than inspiring, just remember that Quidquid latine dictum sit, altum viditur. (“Whatever is said in Latin sounds profound.”)

And yet, the rhymesters and jinglers continue to strive. In 2013, there was a short-lived effort to make “Where Pigs Fly” the official Cincinnati slogan, replacing the effort only a year earlier to adopt “The City That Sings.” Just two years before that, in 2010, the Regional Tourism Network for Cincinnati and Northern Kentucky unveiled to audible yawns the classic “Rediscover your weekend state of mind.” As recently as July of this year a Cincinnati Enquirer columnist asked “Does Cincinnati Need A Slogan?” as if none of these earlier attempts ever happened. At least the Enquirer‘s Chuck Martin, in 2006, employed a bit of humor when he came up with a list of 10 potential Cincinnati slogans, among them “At Least There’s Graeter’s” and “Move Here and Run for City Council. Please.”

If we have not yet succeeded in crafting the most appropriate Cincinnati slogan, it is not for lack of trying. The search has been underway for more than 100 years, at least since 1909, when Cincinnati’s Advertiser’s Club jumped into the fray with a call for suggestions. The Cincinnati Magazine*, Vol. 1, No. 1, April 1909, reported on the effort:

“The Advertisers’ Club has been particularly active along this line for many months. Suggestions galore have been made, and through recent publications in the daily press, the attention of the general public called to the demand for a slogan. The result has been thousands of pertinent suggestions, and the committee of the Advertisers Club, to whom the selection :has been referred, found themselves confronted with no small task.” 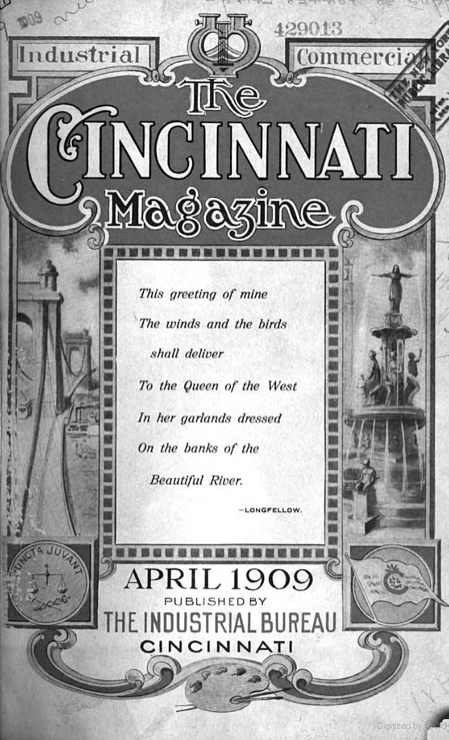 The winning slogan was “Cincinnati Supplies The World” and came equipped with a fine graphic design that, strangely enough had a sort of subsidiary motto tucked into it, “A Square Deal.” And the Advertiser’s Club was doggone proud of it. According to The Cincinnati Magazine:

“The Advertisers Club, as its name indicates, is made up of the hustling advertising representatives of the various publications and the various large business houses of the city; men who are keenly alive to the advantages of advertising, and who believe in lending some of their energies to advertising the advantages of their own city. The recommendation of the committee for the adoption of the above was unanimously adopted by the Club and preparations at ‘once begun for arranging to place free of cost in the hands of every business house agreeing to use the same a cut which the houses could use on all printed matter.”

The Ad Club arranged with the Rapid Electrotype Company to give away free “cuts” of the image to be used on the letterhead of all Cincinnati companies and in all of their advertising. By June, the club was elated to learn that the editor of “El Vordodro Anuncio” (Real Advertising) in Havana, Cuba, had requested a copy of the Cincinnati mark to show Cubans how it was done. The club was also pumped by a thumbs-up from “Practical Advertising,” a magazine out of Atlanta. According to the Cincinnati Enquirer [24 June 1909], the Georgia publication was effusive:

“The Advertisers Club of Cincinnati aimed at the stars when it adopted a motto or slogan for its home city. The ambitious claim that the city by the river gives ‘a square deal’ and that it ‘supplies the world’ cannot be surpassed, for it touches the acme of perfect salesmanship, and it’s good advertising, too.”

And so, in August of 1909, just months after the unveiling of the definitive Cincinnati slogan, a delegation of Cincinnati advertisers traveled to Louisville to attend the grand convention of the Associated Advertising Clubs of America. All of the Cincinnati delegates wore a distinctive lapel pin, emblazoned with a common slogan.

One might expect that these pins, since they were so prominently displayed by men who were members of the Cincinnati Advertising Club that selected the “Cincinnati Supplies The World” slogan and promoted it so energetically, would have that slogan printed on their lapel pins but, no. The Cincinnati lapel pins read:

“Was You Effer In Zinzinnati.”

And so the quest for a Cincinnati slogan stumbled onward, ever onward.