For Amanda and Christopher Edman, it wasn’t just about the exquisite hillside setting, the delightful decor, or the whimsical yard games. Yes, those details were stunning and creative, but it was the people and their union under God, they emphasized, that made their wedding special. 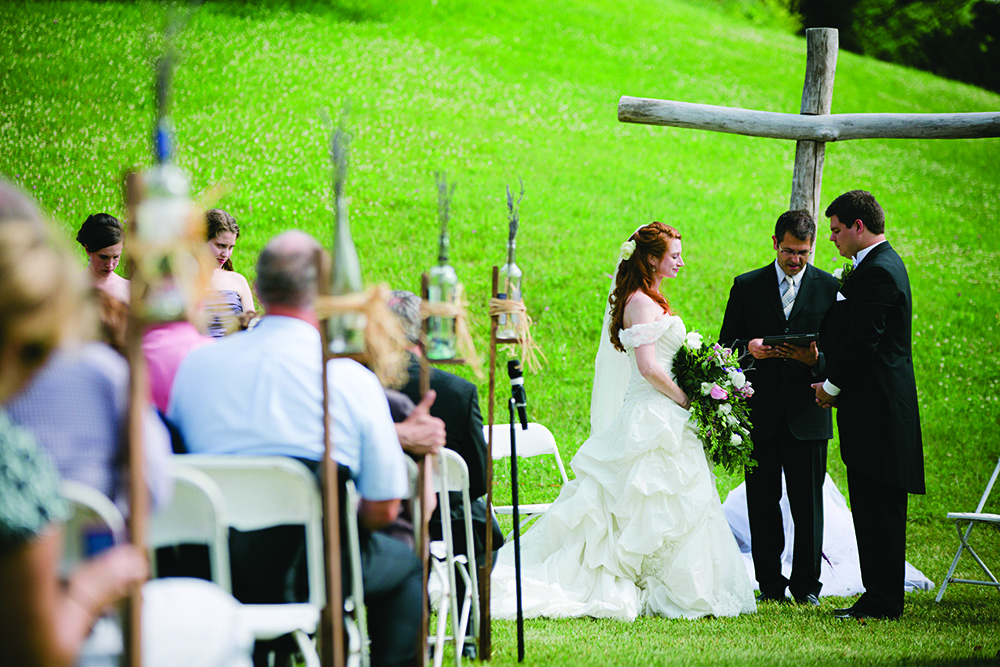 Amanda spent most of their 20-month engagement in Gabon, Africa, where the couple plans to return on missionary work in August 2018. While she was abroad, their friends and family went above and beyond to help pull the wedding details together.

Amanda’s mother made the vanilla-on-vanilla wedding cake, the twig and lace table votives, the bridesmaids’ dried lavender bouquets, the groomsmen’s boutonnieres, and Amanda’s garden-esque bouquet. She also helped Amanda create her cathedral-length veil, which she wore over her face as she walked arm-in-arm down the aisle with her father, who co-officiated the ceremony.

The couple exchanged vows in front of a rustic wooden cross loaned by their church, Hillside Chapel. “Because we weren’t married in a church, we wanted [the cross] to be something that pointed to the focus of the wedding,” Amanda says.

A family-style pasta dinner was catered by One Bistro, a Dayton nonprofit organization that helps fund a “pay what you can afford” café. A dessert spread of family-favorite bars and cookies was made by the couple’s aunts, and both friends and family contributed to the collection of yard games, which included a spray-painted Twister board on the grass, jars for catching lightning bugs, and a cornhole set crafted by Amanda’s grandfather, who also made the barn-wood signs throughout the wedding.

Fleur-de-lis symbols were sprinkled throughout the reception—on Amanda’s earrings, on a wrought-iron lantern, and on the ceremony programs—to represent a Bible verse Christopher referenced when he popped the question. Details like the maypole at the center of the reception tent and the silver tea tray gave a nod to Amanda’s childhood in England.

Vintage dessert plates, scavenged by friends and family from antique shops over several months, doubled as party favors. “They are one of so many examples of all the help and support we had,” Christopher says. “It was a celebration that was made possible by so many people, and we’re tremendously grateful for them.”