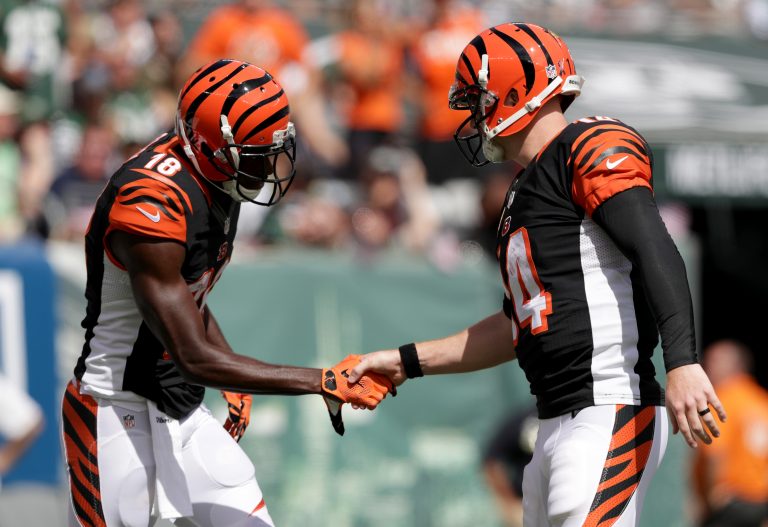 “I’ve been working here since nineteen and eighty-seven. Ain’t nobody ever ordered nothing but a T-Bone steak and baked potato. Except one time, this asshole from New York ordered a trout. We ain’t got no goddamned trout.” — Hell or High Water

On Sunday, the Cincinnati Bengals began their 48th season of play on the 15th anniversary of 9/11, opposing the host New York Jets at Metlife Stadium, a train ride away from Ground Zero.

Opening up on the road against a quality foe is always a tough task, especially since the league’s starters seem to accrue fewer and fewer reps with each passing preseason. That reasoning, combined with the heat (the temperature was 80 degrees at game time and much steamier on MetLife Stadium’s synthetic turf surface), the absences of Vontaze Burfict and Tyler Eifert (two of team’s better players), and the emotion surrounding a marked anniversary of a seminal moment in the history of this country, and a recipe for Week 1 setback was seemingly perfectly concocted.

Eight months have passed since the Bengals collapsed late before a national audience in their playoff tilt against the Steelers, and thus much of the narrative and collective chit-chat since that fateful January night has surrounded the meltdowns suffered by Burfict and Adam Jones. But over that span, some forgot that the 2015 Bengals opened the season 8-0 and were 10-2 with a healthy Dalton.

And while the departures of Marvin Jones, Mohamed Sanu, Andre Smith, and Reggie Nelson are not to be discounted, the Bengals are built to withstand exits from secondary talents so long as the likes of Dalton, Jones, Burfict, A.J. Green, Andrew Whitworth, and Geno Atkins remain under contract and in some form of their prime.

On Sunday, the Bengals offensive line—a year-to-year strength of the team—stood no chance blocking the likes of Muhammad Wilkerson (seven tackles, 1.5 sacks), Leonard Williams (six tackles, 2.5 sacks), and Steve McLendon (five tackles, two sacks). So, the Men in Stripes countered their inability to contain Gang Green’s relentless pass rushers by going to the long ball; Brandon LaFell reeled in a 49-yarder on 3rd-and-18 while Green and third-string tight end C.J. Uzomah each hauled in 54 yards bombs from Dalton, the former burning past Revis Island for a touchdown in the process.

Not only did contributions come from a relative unknown (Uzomah) and a newbie who barely played in the preseason (LaFell), but Margus Hunt—the former second round pick thought to be on the preseason roster bubble after an underwhelming start to his career—delivered a blocked a field goal, a tackle for loss, and a pair of pass deflections. Josh Shaw, whose stock fell in the 2015 draft after he concocted an elaborate lie to shroud the real reason why he injured himself jumping off a balcony, sealed the game after former Bengals quarterback Ryan Fitzpatrick seared an interception into the defensive back’s shoulder.

Despite 52 wins over the last five seasons, this group still has the NFL’s longest postseason winless drought hanging over its head, but that bit of infamy is inconsequential until January. Week 2 brings forth a slightly-less publicized issue: the Bengals recent shortcomings against the Steelers, as Cincinnati has prevailed just once in their past five meetings with Pittsburgh and triumphed only thrice in the two teams’ prior 13 tilts.

After their contest in January descended into bloodsport, the Bengals and Steelers will likely be on their best behavior—or something approaching that—come Sunday afternoon in the Steel City. The fact that Burfict—who was recently quoted as saying that he gives “no f—-s” about the Steelers—is barred from suiting up likely ensures Sunday’s bout will be a bit more civilized.

In any case, the Bengals—being the plain T-bone steak and potato combo that they are—should be ready.