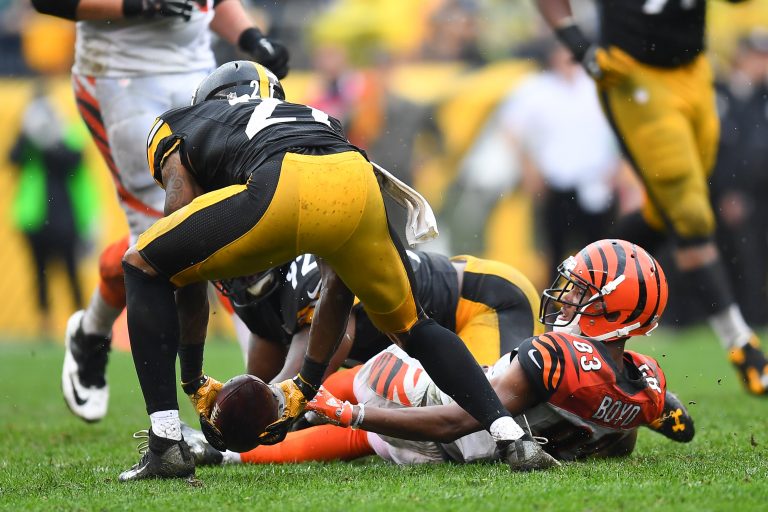 In what was a hotly contested game against Pittsburgh, the Bengals offense didn’t come away with too many positives. They couldn’t establish a rhythm or a running game, looked lost on third down, and only scored one touchdown. However, one of the few shining stars in the Bengals offense this week was rookie Tyler Boyd. The Pittsburgh native is no stranger to Heinz field, having starred there at the University of Pittsburgh and Clairton High School, where Boyd won four consecutive PIAA Class A state championships. He got started early on Sunday, converting the first third down of the game on the team’s opening drive.

The route is a simple quick out, and with the defender 5 yards off the ball and shaded to the inside, it’s an easy catch. The outside corner has to run with A.J. Green on the outside and C.J. Uzomah occupies the middle with a stick route, leaving Boyd wide open. He does a nice job catching the ball and getting his head around before being sandwiched between both defenders.

Following this play, Boyd didn’t see any recorded stats until midway through the second quarter. However, his next catch shows his playmaking ability as a possession receiver, with an ability to make catches and get tough yardage, even with defenders looming.

The route combination on his side of the field is the same as before, but the backside routes are all that change. The outside man is still running a go route to clear space and Boyd runs the quick out again. Both defenders have seen this before so they’re quicker to react and close in quickly once the ball is gone. Boyd makes the reception with defenders breathing down his neck, yet is still able to contort his body around them to stretch out for extra yardage. He smartly uses his hand to keep himself up and it turns a potential 3rd and medium into a short yardage situation.

The next play Boyd makes is on the next Bengals drive and shows the feet and route-running that made him such a coveted prospect coming out of college. While coming out of a tight bunch look, Boyd is going to run a skinny post and sit behind the zone coverage to give Andy Dalton a target. Green helps on the play by running a crossing route that draws attention from the linebackers to play up tight to him. This extra yard or two is the difference that allows Boyd to sit in the zone and give Dalton the window to put it between two defensive backs. That’s a rare trait in the NFL for a rookie receiver. Getting a proper feel for zone coverage is almost instinctual and typically requires years to adjust to.

Entering the second half, the Pittsburgh native would continue to put on a show, getting a first down on this 1st and 25 situation with the Bengals deep in their own territory. The Bengals are running all verticals with the outside men taking go routes straight down the field, and the inside men running seams to try and find space. Boyd beats his man and immediately knows to look for the football. To this point the play is easy, but to be able to hold onto the ball after taking the hit he receives is great. Mike Mitchell is one of the harder hitting safeties in the league and is known for sticking receivers in the middle of the field. Boyd holds on after taking the high-low tackle, a play that lesser receivers would likely drop.

At the beginning of the final quarter of play, Dalton immediately looked for his productive slot man. By looking at the defensive alignment he knows the corner over Boyd is blitzing—whenever the safety is stacked over a corner that generally dictates the corner is coming after the quarterback. At the snap, the corner comes and Dalton fakes the run to Jeremy Hill. This play action freezes the linebacker Timmons, allowing Dalton to get a quick strike in to Boyd.

And now for Boyd’s sixth and final catch. This is the one that sadly everyone will likely remember, although that would be shame considering how well he played all day.

With the offense down eight and driving to tie the game after the two-minute warning, Dalton found Boyd on an innocent hook pattern over the middle. He comes across the formation at the snap and sits in the underneath zone. Dalton takes the easy dump off and Boyd goes down after a modest 6-yard gain. Well, at least that’s what we all believed to happen, including the officials on the Bengals sideline. Someone else on that crew thought differently though and upheld the on-field call of a fumble—despite the fact that you could clearly see Boyd’s knee down. Some have disputed whether or not you could see possession from the limited camera angles, but I’m not one of them. Don’t you find it odd that a league that has ridiculous tax breaks can’t find the technology to get decent camera angles, yet we were able to land on the moon almost 50 years ago. Can’t anyone add a zoom to the wire camera? WHAT ARE YOU HIDING MORELLI???

Camera angles and Pete Morelli conspiracy theories aside, it was a fantastic day for Tyler Boyd and Bengals fans should be excited for the possibility of what he can provide with 14 regular season games still to play. The Broncos bring to town this week and excellent set of corners in Aqib Talib, Chris Harris Jr., and Bradley Roby. If Boyd can keep his production up against that good of a group, all should be well in Bengaldom.