Home Sports Football How Trevor Siemian Carved Up the Bengals 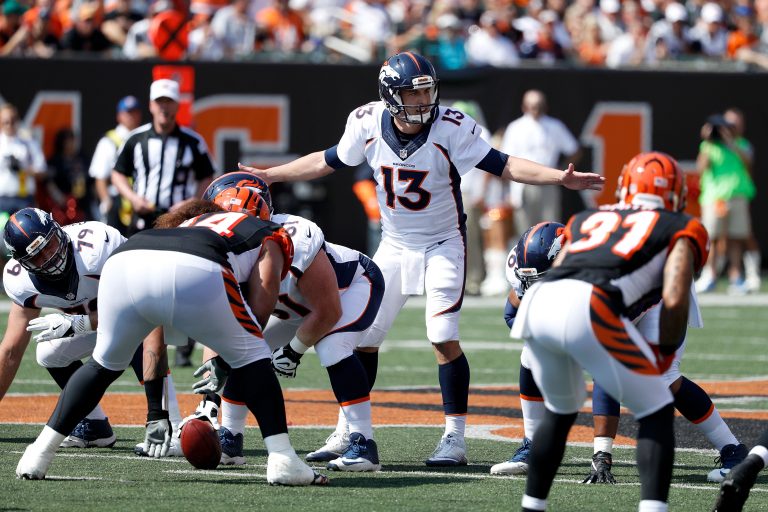 Coming into Week 3, the Cincinnati Bengals had a game plan that I’m willing to bet almost every defensive coordinator in the NFL would agree with: Stop the run and make an unproven Trevor Siemian beat you through the air. Despite the receiver talent the Broncos have in Demaryius Thomas and Emmanuel Sanders, the thinking likely was that the Bengals talented secondary should be able to cover them long enough to cause trouble for the new quarterback, right? In theory it sounds perfect, though it proved to be anything but.

You have to give credit where credit is due, so we’ll be begin by saying that Paul Guenther’s group did what they set out to do in shutting down the run game. CJ Anderson and Devonte Booker looked absolutely pedestrian on the ground. After running for at least 120 yards in their opening two games as a team, with at least one player averaging no less than a 4.6 yards per carry, the Bengals held the Broncos to 50 yards on the ground. CJ Anderson was the leading rusher with 14 carries for 37 yards, an average of only 2.6 yards per carry. Give credit to defensive tackles Geno Atkins and Domata Peko for causing havoc on the interior and the linebacker rotation swarming to the ball. There was absolutely nowhere to find success on the ground.

But only executing half of your game plan defensively isn’t going to end up with a win. There was pressure on the Northwestern QB to deliver. And he did. The Bengals historically love to run zone pass coverage, and they continued to show a lot of zone coverage on Sunday. With a defense committed to stop the run at any cost, the Broncos offense took advantage of it to the fullest.

Early in the game with the Broncos on the cusp of the red zone, the offense showed some aggressive zone run blocking at the snap. With the corner on Emmanuel Sanders so far off the ball, it’s an easy throw for Siemian to get the ball to him on a smoke screen. It’s a safe play for a young QB and it allows a quick-footed Sanders to be able to work in space. He’s able to break away from an attempted Adam Jones tackle and pick up 11 yards.

But it wasn’t just gimme plays that the young quarterback was able to make. Even in expected passing situations, he proved he could thrive. Take a look at this trips look where Trevor shows some excellent timing.

With three receivers to the right, the Bengals bump the outside man. Dennard flies to the flats in order to stop the quick out to the sideline and Vincent Rey is occupied jamming and then passing off the inside receiver. These delays, combined with some good technique from the receiver, allows him to get separation off the break. As soon as the receiver plants his foot to break on his route, Siemian is driving the ball forward with near perfect timing. These rhythmic throws allow him to find a lot of success in the particular defense Cincinnati was showing him, causing the Bengals to have to dial some different looks up to try and disrupt that rhythm.

They would attempt to do just that on a 3rd and 5 situation before the end of the first half. Here the Bengals bring the house to try to force a quick decision by Trevor—either throwing the ball away and forcing a punt, or generating a turnover. Unfortunately for the boys in black, it didn’t work. The looping inside pressure is perfectly picked up by Denver. Over the top the Bengals appear to show a Cover-3 look with Iloka occupying the middle of the field and Jones responsible for the third to the near sideline. Sanders runs an out and up, and although Jones doesn’t totally bite on the double move, the single coverage is enough of a reason for Siemian to take a shot. He puts the ball up and gives Sanders a chance, who with some aggressive hand-fighting is able to separate from Jones at the last second for the score. This just goes to show you that even with the secondary in position, a failure to get pressure in key situations can leave some of your best players hanging out to dry.

If that were all that happened though, the Bengals still may have won this game. But it was Denver’s last touchdown that came on a coverage I’m still having trouble understanding.

With Denver driving downfield with a lead in the fourth quarter, they show the Bengals a trips bunch look with a lone receiver on the weak side split wide. That lone receiver is Thomas, who is arguably certainly the team’s best offensive player. That generally wouldn’t be much concern though as Adam Jones and Dre Kirkpatrick are solid corners capable of covering him one-on-one. Except they weren’t covering him. Of all people to put on the Pro Bowl receiver, it ended up being Chris Lewis-Harris. (Josh Shaw picked up a knock a bit earlier, and Jones appeared to cramp up on a nice pass breakup against Thomas a play earlier.) The Broncos clearly recognized the mismatch (though it’s unclear if the Bengals defensive play-calling did the same), and it pays off pretty much as you’d expect. With the Bengals focused on disrupting the bunch, Iloka’s over-the-top coverage is drawn to that side, and Thomas is simply not going to lose a one-on-one matchup with Lewis-Harris. That was essentially the final dagger in a disappointing home opener.

So while Siemian certainly played well, there were plenty of factors involved. The Broncos gave him a favorable game plan with some excellent play-calling. The Bengals didn’t help by failing to generate the proper consistent pass rush to throw Siemian off his game. But perhaps most importantly, the young Bronco showed impressive patience and timing for the most part in this game. He took shots when he needed to and let his star receivers make plays, but he also made some plays himself when called upon. Some may have assumed Siemian was a quarterback tasked with merely being a game manager, he’s proving now that he’s also capable of being the guy if Denver needs him to deliver.