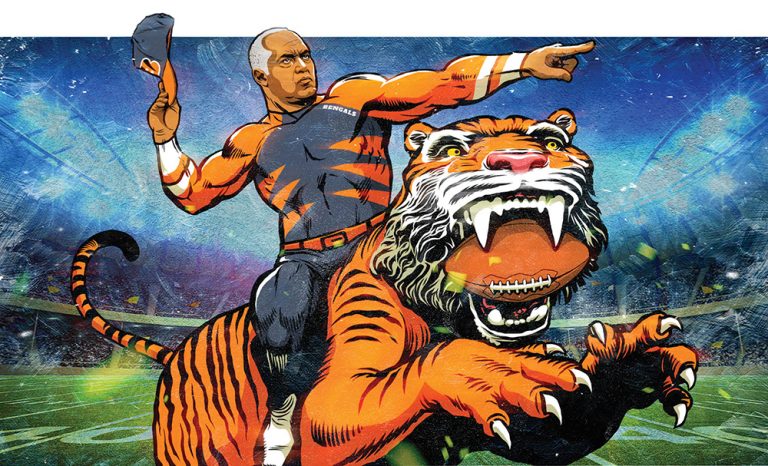 Entering the 2016 NFL season, his 14th as head coach of the Cincinnati Bengals, Marvin Lewis had prowled the sidelines for 112 wins, the most in franchise history. He led the squad to seven playoff appearances in 13 tries, including its first postseason in 15 years back in 2005, and each of the last five seasons. Lewis is also 0–7 in those playoff tries, the worst record in NFL history, capped by last season’s epic meltdown against the rival Pittsburgh Steelers at Paul Brown Stadium.

Most people—fans and pundits alike, near and far—tend to focus on the bad when it comes to Marvin Lewis. That 0–7 playoff record gets tossed around far more than the 112 wins. This is not unreasonable. As Lewis himself told me, “Players win and coaches lose.” If you poll tailgaters outside Paul Brown Stadium on a Sunday afternoon about the biggest impediment to the Bengals getting over the proverbial playoff hump, Lewis is bound to be the most popular culprit. Ample media coverage following the collapse against the Steelers suggested Lewis should be fired, and it’s fairly common to hear fans claiming—even demanding—that Lewis has to go. This, too, is not unreasonable. I just disagree with it.

For the November 2014 issue of this magazine, I wrote a feature story on the Brown family’s ownership of the Cincinnati Bengals, much of which focused on how Mike Brown’s reputation as arguably the worst owner in all of professional sports has softened quite a bit in recent years. The team’s overall success of late is largely responsible for the shift in public opinion, but in talking with players and coaches (past and present), team employees, and community members for that story, the principal reason for that on-field success—and, remarkably, Brown’s own changes—always came back to one man. “I have to credit Marvin Lewis in a lot of instances for straightening the franchise’s thinking out, the direction, anything and everything you can think of as it relates to football,” Bob Trumpy, the former Bengals tight end and longtime broadcaster, told me. This was a common refrain.

Bengals fans haven’t forgotten how putrid the team was in the 1990s—the weight of it is still ingrained in the fanbase’s psyche, if not the team’s. But it is easier to forget that Lewis was the impetus for ending the franchise’s decade-plus string of incompetence when he was hired in 2003. It was the organization’s first truly outside hire at that position since Forrest Gregg in 1980, and showed at least some understanding by the front office that an overhaul was necessary. “When I first came to Cincinnati, that was the thing: You called me. You wanna be in the NFL, let’s be in the NFL,” Lewis recalled at training camp in August. “Mike [Brown] changed things. We did some things different.”

They weren’t all immediate, but over time, Lewis established his influence. The organization improved the way it drafts, retains, and trains players. It upgraded its facilities and amenities. It increased its charitable and communal outreach, spearheaded by the Marvin Lewis Community Fund. “He’s changed the face of this franchise,” says Darrin Simmons, Bengals special teams coach. “Since he got here, we’ve added a different level of respectability, not only in the national sense, but more importantly, right here in this locker room.”

Perhaps the most significant impact Lewis has had on the Bengals, aside from that on Mike Brown, is the respect he garners from his players, an esteem unmatched since Sam Wyche’s tenure. Up and down the roster, guys will tell you how approachable Lewis is as a head coach, his unique way of establishing a distinct, personal bond with each player. Some even look to him as a father figure. “I know Coach Lewis cares about me more than football,” says cornerback Adam Jones. “We talk all the time, on and off the field. He came to my wedding. When people do certain things like that, they show that they really care about you as a person.”

It’s allowed Lewis to adapt, to continue being successful even after down seasons or yet another devastating playoff loss. “Most coaches, when they are in those situations, they start to lose their players,” says offensive tackle Andrew Whitworth, in his 11th year with the team. “For him to have the ability that after a bad season, he can get the players to rebound, that speaks a lot to who he is as a coach.”

Granted, the ultimate goal is to win, and offering up Lewis’s proven ability to reach the playoffs and lose as some evidence of his coaching merit is damning him with the faintest of faint praise. If seven isn’t enough, how many chances should he get? I don’t have a good rebuttal for that, other than the argument that if not for Lewis and the way he has changed the franchise, changed the locker room, and most of all, changed Mike Brown, those chances likely wouldn’t have been there in the first place.

When asked what the biggest adjustment was in his relationship with Brown during his time as head coach, Lewis paused for a long time before saying: “I think [it’s] his trust in me to do what’s right for the franchise.”

This is not insignificant. There’s certainly no guarantee that same trust will be afforded the next guy, at least not right away. History, in fact, suggests otherwise.

It’s not a one-way street, either. Asked what impact Brown has had on him over the years, Lewis pauses again as a smile creeps across his face. “Patience,” he says. “For me to be patient, and that things will work out.”