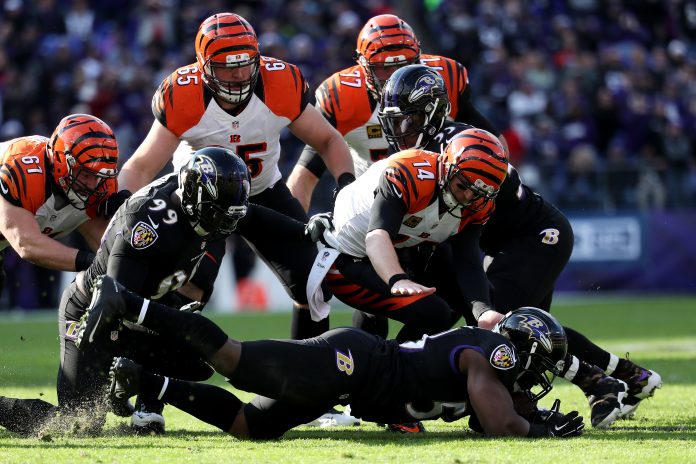 “I guess I don’t have the taste for the jugular you guys have.” — Penny Fuller, All the President’s Men

Down starting safety Shawn Williams and his backup, Derron Smith.

Woof. But hey, at least Cedric Peerman came back!

On Sunday, Baltimore, losers of five straight to Cincinnati—put that in your deer antler pipe and smoke it, Ray Lewis—started strong, with Elite Joe Flacco polishing off an 11-play, 75-yard touchdown drive by parachuting a lovely ball into the corner of the end zone to Breshad Perriman, who beat the semi-maligned Darqueze Dennard for six.

With the Bengals first drive submarined by a Tyler Eifert holding penalty, the Ravens drove to the Cincinnati 9 before a third-down sack by Carlos Dunlap made way for Justin Tucker’s 52-yard field goal, the first of Tucker’s three first-half boots from 50-plus yards—a feat the Bengals organization was unaware was even possible in the NFL in 2016.

The Bengals second possession bore fruit, though. Aside from Baltimore safety Eric Weddle dropping the easiest interception of his life, Dalton was sharp on the drive, leading the visitors to the Ravens 4 before predictably stalling out and settling for three.

The teams then exchanged plays of incompetence, with Not So Elite Flacco’s pass tipped by Dunlap into the waiting arms of Rey Maualuga. Three plays later, center Russell Bodine snapped the ball before Dalton was ready, and Baltimore recovered the fumble.

The rest of the half was an exercise in ineptitude for Cincinnati. On their fourth drive, the Bengals narrowly converted a 3rd-and-7 due to a favorable spot. But instead of staying organized and getting their next play off quickly, the Bengals opted for disorder and called a timeout, which allowed Ravens coach John Harbaugh and his staff an entire TV timeout to weigh a possible challenge. Baltimore eventually challenged the call, which was overturned, and Cincinnati had to punt (at least as far as Marvin Lewis was concerned).

Tucker’s second field goal from 57 yards out was aided in part by Lewis, who elected not to push the Ravens back farther up the field after an offensive holding penalty on third down. On the Bengals sixth and final drive of the half, the offense took over on its own 25 with one minute and 40 seconds left on the clock. With a chance to either go for a score or to sit on the ball, the Bengals chose half-measures—a pillar of the Marvin Lewis School of Bizarre Clock Management—advancing the ball three yards in four plays and allowing the hosts to keep two timeouts.

Seven plays and 37 yards later, Baltimore was in position for Tucker’s third long boot of the half. Tucker was golden from 54 yards, and the Ravens entered the half up 16-3.

Whatever the shorthanded Bengals offense was doing in the first half, it wasn’t working; on the unit’s six possessions, the offense totalled just 115 yards, punting four times and fumbling on another drive. First downs were a bit of a problem, as just 29 yards were gained on 12 first-down plays.

In the second half, Cincinnati opened with a punt but found its footing on its second possession. Long completions to Hill (24 yards), Eifert (25 yards on 2nd-and-20), and Boyd (22 yards on 3rd-and-7) defined the drive, which ended with Eifert’s first touchdown reception in a month. Embattled kicker Mike Nugent threw a big ole wet blanket (also known as a “Nugent”) on the proceedings, shanking his third straight extra point.

As the second half wore on and the teams exchanged field goals, the Bengals took over on their own 19 with just over four minutes remaining and needing seven points to tie the game. A steady diet of Rex Burkhead ignited the march and a savvy completion to Eifert on 4th-and-3 provided Cincinnati with a first down on the Ravens 16 with 89 seconds on the clock.

And then the unraveling happened.

Dalton threw incomplete to Boyd on first down, and on second down his pass was batted to the turf, the fourth time on the drive the Red Rifle had his pass obstructed. On third down, Elvis Dumervil, a former speed rush ace who hadn’t played since Oct. 9, thundered past backup right tackle Eric Winston and knocked the ball free from Dalton’s hands.

The Ravens recovered with just over a minute left. The Bengals defense held, but Lewis couldn’t stop Baltimore from running the clock down to 11 seconds left after third down, because Cincinnati blew its first timeout late in the third quarter for reasons unknown. The Ravens then voided the rest of the clock by exercising a flaw in the NFL’s end-of-game penalty rules.

All in all, another painfully meh performance. Even with Green and Bernard, the Bengals weren’t going to find any traction on the ground (they rushed for 64 yards on 20 carries) or rack up many points opposite the Ravens, who entered the weekend ranked No. 1 in defensive rushing efficiency, second in yards allowed per game, and fourth in overall defensive efficiency. (After an off-year in 2015, Baltimore’s D is back to its bruising ways.)

Defensively, the Bengals continued their post-bye improvement, and have now limited opposing offenses to 21 points or fewer for three straight weeks; in their first eight games, the Bengals yielded 21 or more points on six occasions. So, ya know, silver lining!

The final outcome was more of the same; the five-point margin was the 11th time in the past 13 meetings that a contest between these two franchises was decided by one score. On the losing side of things against the Former Browns for the first time since Nov. 10, 2013—remember the original Dalton-to-Green Hail Mary?—Cincinnati is now 3-7-1 and winless since Oct. 23. The optimists will tell you that the Bengals are still alive in the AFC North race, and the math backs up that sentiment.

But as someone who deeply values analytical journalism and has gleaned much from its evolution in the writing game over the last decade, let me say this: to Hell with the math. The Bengals are cooked, and they have been for weeks. If some of you Orange and Black fans haven’t seen the light, allow me to Grinch up your Monday and deliver you some overdue realism.