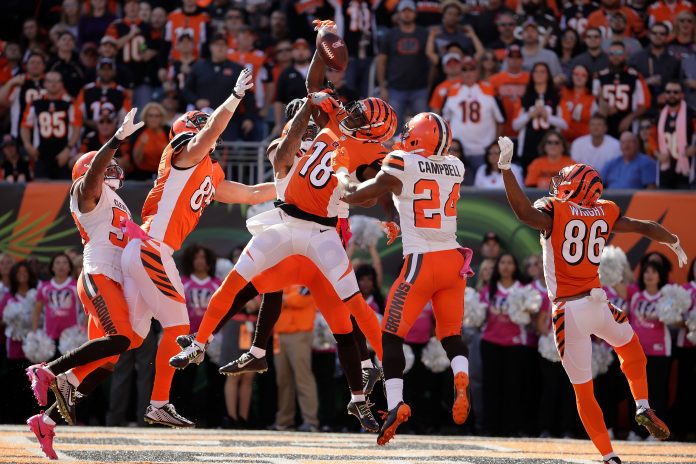 Thanks for letting us have this one!

You’ve been on quite the sports roll lately. (And you’ve certainly come a long way since setting the Cuyahoga River ablaze multiple times.) First, the Cavaliers roared back from a 3-1 deficit in the NBA Finals against the defending champion Golden State Warriors to secure your city’s first title since 1964. And now, the Indians are just four victories shy of the franchise’s first World Series victory since 1948. #ParadeCity #Believeland

So, again, thanks for being good sports and allowing us plebeian Cincinnatians a Sunday afternoon of chuckling at your footballing ineptitude—it truly is the gift that keeps on giving.

Sunday, the Bengals rolled the Browns 31-17 on a picturesque fall day in the Queen City. Tyler Eifert made his long-awaited season debut in what doubled as Hue Jackson’s fuzzy-feelings return to Paul Brown Stadium. Andy Dalton (308 passing yards, two touchdowns, zero turnovers), Jeremy Hill (168 rushing yards on nine carries, one touchdown), and A.J Green (eight catches on eight targets, 169 yards, one touchdown) ran circles around the Browns defective defense as the Bengals offense accumulated season-bests in points and yards (559). The latter was the most yards Cincinnati had collected since Boomer Esiason and the Bengals recorded 582 yards of offense in an overtime win over the Los Angeles Rams on October 7, 1990. (Three Bengals topped 100 yards receiving that day: Tim McGee, Rodney Holman, and the great James Brooks.)

But the Bengals defensive shortcomings—the unit ranked 25th in Football Outsiders’ defensive efficiency metric prior to this week’s games—popped up once again as the Browns managed 22 first downs and 180 rushing yards despite deploying two rookie quarterbacks.

The hosts opened with the ball and promptly zoomed 75 yards in seven plays for a touchdown. When Gio Bernard found paydirt from five yards out, the escalator adjacent to PBS’s south end zone was still buzzing with paid customers that had yet to reach their seats. The drive was a lovely mix of run (well hello, Jeremy Hill!), pass, and the sort of enhanced tempo between plays that produces harmonious offense when the chains are moving. (This worked out so well that the Bengals failed to exercise tempo for the rest of the half!)

For a winless outfit, the Browns (at least offensively) looked wonderfully competent (at least for a half and change) for a team that lost yet another quarterback to injury when Cody Kessler left in the first half with a concussion. Through two quarters, Cleveland’s offense managed 13 first downs, converted six of seven third downs, and tallied nine plays of 10 yards or more with Kessler and Kevin Hogan (the Browns sixth quarterback of the season) calling the shots.

When the Bengals took over on their own 15, leading 14-10 with just over a minute left prior to half, Cleveland had to be thinking happy thoughts about its first-half showing. Then, in spite of the Bengals tripping over themselves trying to manage the clock, A.J. I-don’t-need-no-damn-left-hand Green happened.

The second half commenced with Hogan directing an eight-play, 75-yard scoring drive, a march capped by a marauding 28-yard TD run by the former Stanford signal-caller. Post-game, multiple Bengals admitted that they had no idea who Hogan was because they hadn’t seen any tape of him. The Bengals defense eventually got wise to Hogan’s sorcery, forcing a string of punts after that touchdown, and 10 points by the offense in the third frame was more than enough to seal the win.

And yet, there were mistakes aplenty once again for Cincinnati, even against the league’s worst team. Whether the proliferation of chunk plays surrendered by the defense (the Browns finished with 13 pre-garbage time plays of 10 yards or more); allowing Hogan to average nearly 15 yards per carry on seven totes; Shawn Williams intercepting Hogan but fumbling the ball back to the Browns; or substandard special teams play (a dropped punt, a roughing the punter penalty, and the requisite pair of missed field goals from Mike Nugent), the Bengals are still stubbing their toe at inopportune times. Sunday’s miscues failed to amount to anything of substance due to the Browns presence on the opposing sideline, but the game served as another reminder of the flaws that reappear every time the Bengals take the field, even if those mistakes come in different shapes and sizes.

Still, after a two weeks of despair, the Bengals—now winners of four straight vs. their Ohio rivals since the Thursday Night Massacre—should feel better about themselves. Despite a hellacious schedule to open 2016 and wildly uneven play, Cincinnati sits in a tie for second in the AFC North. A 4-4 record is in play after next Sunday, and the schedule lightens up until season’s end.

The franchise now pivots its attention to packing up and preparing for a flight across the Atlantic to take on Washington at London’s Wembley Stadium. I asked Marvin Lewis post-game if he was looking forward to his team’s voyage to London, and received a reply that only a football coach could conjure.

“We’re not going to London,” Lewis said. “We’re playing the Redskins and it happens to be in London.”

So I guess we shouldn’t expect to see Lewis re-create the Lindsay Lohan/London montage scene from Parent Trap this week. Too bad.